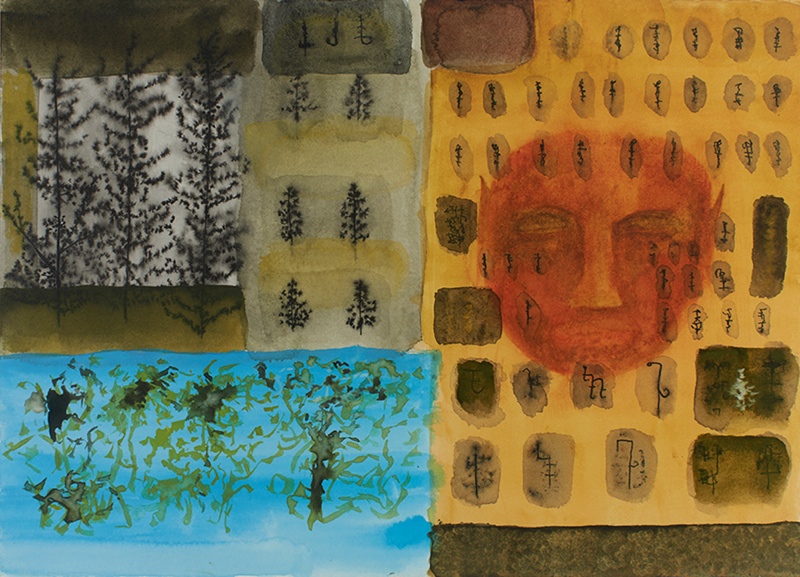 The Invention of Animals, is like standing inside a waterfall —John Lurie

The release of The Invention Of Animals (Amulet, 2014) finds the return of saxophonist and visual artist John Lurie to the musical spotlight he left nearly twenty years ago. First recognized in the late 1970s for his Downtown band The Lounge Lizards, a band that introduced many listeners to artists such as Marc Ribot, Michael Blake, Roy Nathanson, Steven Bernstein and brother Evan Lurie. Lurie's music spearheaded the political resistance to the neo-cons conservative jazz movement of the 1980s. He composed and recorded soundtracks to films including, Mystery Train, Clay Pigeons, Animal Factory and Get Shorty in addition to acting in 3 Jim Jarmusch films Stranger than Paradise and Down by Law. He can also be seen in The Last Temptation of Christ and Paris, Texas and the HBO series OZ. Lurie wrote, directed and starred in the 1991 television series, Fishing With John featuring guest appearances by Tom Waits, Matt Dillon, and Dennis Hopper.

Because of medical issues, he has focused primarily on painting since 2004. His solo museum exhibits include P.S.1. Contemporary Arts Center in New York, Musee Des Beaux- Arts De Montreal, the Musee d'Art Moderne Grand-Duc Jean in Luxembourg and the Watari Museum of Contemporary Art in Tokyo, which gave their entire museum over to the presentation of Lurie's work. Both the Wadsorth Athenaeum in Connecticut and The Museum of Modern Art in New York have acquired his work for their permanent collections.

The Invention Of Animals assembles seven previously unreleased live and out-of-print studio recordings from The John Lurie National Orchestra sessions with percussionists Billy Martin and Calvin Weston that produced the now out-of-print CD Men With Sticks (Crammed Discs, 1993). The centerpiece of the limited edition 180 gram vinyl LP and its digital download is the title track running at 19-minutes- plus, from a live performance on February 12, 1994 in Thessaloniki, Greece.

All About Jazz: At one moment in time, your band Lounge Lizards was as important as The Clash, or maybe U2. If there were no Lounge Lizards, would there have been no Downtown jazz scene?

John Lurie: Really? That's how you see us? That is very sweet of you to say, but you must be a little nuts. We were nowhere near as big as those bands and the jazz world wouldn't let us in the house because they were worried we would mess up the furniture.

AAJ: You pared down the lineup to just two drummers and your horn on The Invention of Animals, what was your motivation for this configuration?

JL: You know Billy Martin and Calvin Weston and I got together to write new stuff for the Lounge Lizards and we just started playing. The possibilities began to seem magical to me. I didn't imagine we could make a full enough sound at the beginning, but listen to the title track, The Invention of Animals, is like standing inside a waterfall.

AAJ: Are you still writing or playing music? Perhaps under another name...

JL: Yes, I am now putting music out under the name Bruce Springstein.

AAJ: Is art, your painting, providing an aesthetic expression opportunity not fulfilled by music?

JL: I can't play music any more because of illness. Once I ran out of Law & Orders to watch I figured I had to do something.

AAJ: Do you approach painting in a Manner similar or different from your musical composition or performance?

JL: Yeah, it's more like composing, but is more fluid than that in a way. You know when you are playing around the house and this thing floats out. This little melody that wasn't even your idea, just something that visited you for a moment.  And you try to play it again or record it or write it down and it is never quite the same. When the painting is going good, that thing can happen and you have it, right there, it doesn't have to be recreated.

AAJ: Are you still fishing?

JL: You know, many would say I was never fishing. Some people take fishing pretty seriously and they don't like me much.

Painting
"Ignorance is not only not knowing, it also includes not wanting to know" by John Lurie