Geggie uses something of an unusual instrument, a double-bass with an adjustable stop on the lowest string that allows him to drop chromatically from a low E down to a low C, when the situation calls for it. "It's actually quite common," explains Geggie. "Ron Carter has had one for years, though it's more common amongst orchestral bassists. But more and more people are doing it. Ron Carter, Rufus Reid, Ratzo B. Harris...many bassist have one. I like having it; it's not something I necessarily need to use, but when you use the stop to drop the low E to a D, for example, it changes the entire harmonic landscape of the instrument.

"Being chromatic, I can drop the string in half steps," Geggie continues. "If, for example, I have it at the D stop the strings, from the bottom up, would be DADG, which is a very resonant series of notes. If I have it at an E-flat, then the notes that come off an E-flat arpeggio would then be more resonant; it sets up an entirely different harmonic series. So it just provides different opportunities; it's nice to have those notes from time to time, but it doesn't have to control your approach either. "

Thanks to increasing air travel restrictions, more and more bassists are resorting to collapsible instruments—or, even further, not traveling with one at all and using a bass provided by the venue. They can and do adapt, but not having their own instrument—and, in the case of Geggie's one that may not always be possible to supply—adds just one more layer of challenge and complexity that can change the performance from night to night. The reverse of that, is that Geggie is often called upon, by the Ottawa International Jazz Festival, to loan his bass to musicians coming from abroad to perform. "Listening to other people play your instrument—and how someone else approaches your instrument to get a sound—it's astonishing," Geggie continues. Jaco Pastorius was renowned for saying, 'The sound is in my hands.' I've also had that experience at the [Ottawa International Jazz Festival] jam sessions, for example when Billy Hart sat in with Nancy and me. You could absolutely tell it was Billy, even though it wasn't his kit [or, for that matter, the kit that was supplied to Hart for his festival performance, which has to meet the drummer's specifications].

"That's the beauty of it," Geggie concludes. "Drummers and pianists have to live with almost always playing an instrument that's not theirs, and bassists are doing it more and more because of travel restrictions. Larry [Grenadier] told me that, for his last European tour, he didn't bring a bass for the first time. He described it as an interesting sort of challenge, and for the most part everything was fine; but it was definitely a question of playing what you have right now, in the moment where you are, and making the most of it.

Geggie has been hosting the Ottawa International Jazz Festival jam sessions for all but two of the last eight years, providing a remarkable opportunity to meet and play with many of the musicians who come to town. The networking there often leads to later collaborations as part of his Geggie Concert Series, but while McCaslin has performed at the festival many times, including two memorable shows with the Maria Schneider Orchestra, Geggie's first encounter dates even further back. "I first heard Donny In Ottawa [in the 1990s] with Lan Xang, and he was a really lovely person," Geggie explains. "I don't know how I got the courage to ask him to play with me. It was one of The Fourth Stage shows, with Jim Doxas [in the spring of 2005]. We played Toronto, did a CBC [Canadian Broadcasting Corporation radio] thing, then Ottawa and Kingston. We did a number of things in one shot; it felt really good, and he was very open to playing. I've listened o him in the context of so many of his own projects, and his ability to play in different styles and combinations is just remarkable. He's so open to playing, and he's so completely in the moment, making suggestions, making comments, interacting with people...it's just so easy.

"There's also the social aspect," Geggie continues. "At the time, we joked that we wanted to put together a group that, if we were all to end up traveling in a van together, touring, we would all get along. I could imagine Donny, Nancy, Nick and I having a really great time on the road, so I figured we'd have just as great a time making music. Catching everyone for an extended tour at the same time is almost impossible, but still, there's a sense of comfort and respect."

Geggie shares a similar respect for Walker. "I've known Nancy for a long time," Geggie says. "She's a fabulous musician, has such a deep knowledge of her instrument and of music in general. She writes great music, and is such a lovely person. I feel as though I sound so much better when she's playing piano. Because she seems to make me sound really good. She knows what to play, she has a great melodic gift, a great rhythmic breadth—there's so much there in terms of her playing. It's really lovely the way everyone fit together. It wasn't work, there were no adjustments that needed to be made; it was as simple as getting together and playing."

Both sessions took very little time in the studio. "The Marilyn session took two days for recording," says Geggie. "I'd set out three days for recording the quartet for Across the Sky, but we only used two because we got everything done...so why stick around? I think it's an indication of the comfort zone we were in.

Finding the right labels to release the music was also a challenge, especially given the eclectic whole that the two records together comprise. Hooking up with Montreal's Ambiances Magnétiques for the decidedly left-of-center Geggie Project and Calgary's Plunge Records for the more centrist Across the Sky couldn't have worked out better. "I really am grateful to both the labels; it's a difficult time, and I'm looking to the labels for their ability to distribute and do things so that I don't end up with boxes of CDs in my basement forever, to give away at Christmas time as gifts. I feel that Ambiances was the right place to put the Geggie Project CD, in terms of its particular niche market and I think Plunge is a good place for the Donny record. Both Joanne [Héu], at Ambiances, and Simon [Fisk] at Plunge have been really great. I don't know if people realize just how much labels do—it's a really hard slog, and something I'd not want to do by myself. I was thinking about putting them out on my own, and I just realized I wouldn't have the energy or the wherewithal to do the necessary work. It's a real tribute to what those people do; they do it with a great deal of passion and intent and it's nice to have their support.

As Geggie prepares for the CD release party for Across the Sky on January 30, 2010 at The Fourth Stage (another concert in the 2009/2010 Geggie Concert Series), Geggie reflects on the success of his two CDs, and of a series that has become, amongst Ottawa jazz fans, one of city's most eagerly anticipated events each year. "There's a great network of musicians created by the series, and whenever any of us meet we always talk about how it would be nice to do things together. So often, I have conversations with people who say, 'It would be really nice to do such-and-such,' and we throw around ideas with nothing particular in mind—no plans, just tossing around ideas. So when I'm planning the next season, it's a chance for me to sit down and think, 'What did I talk to so-and-so about?'

"In fact," Geggie continues, "over the last couple days I was talking with [Toronto pianist] David Braid about something, and it's nice to be in a situation where I feel blessed at The Fourth Stage. The series has been going on for nine years, and they [The National Arts Centre] continue to let me do these shows, and they're not telling me what to do; they trust my artistic ideas and vision, and that frees me up to think about, 'Well, what could I dream up, what could be possible?' I think the goal for me has always been: interesting people, interesting, unique musicians who might work well together. "I can often imagine people who've never worked together coming together here and working well together.

"One of the most gratifying things is putting people together to see what happens, what comes out of it," Geggie concludes."Some of them are more unexpected than others—like the show with Cuong [Vu] and Kevin Breit. And the funny thing is it wasn't an immediate mix, but it got there. The three of us found common ground and now, when I talk to either of them, they ask how the other is doing. I like the idea of meeting people and creating different things out of possibilities. I'm not thinking 'I need to have an avant-garde show; I need to have a mainstream show,' I've just been trying to find the right combinations of interesting people to work together. I love the concept of being able to do that. And to see what happens from that. The fact that, over the years, I still get emails from people saying, 'We'd love to do something again'—George Colligan emailed me just the other day, to ask if we could do anything. The fact that people are not just viewing it as a gig, where they come in, play and leave, but are interested in the longer term, that they had fun doing it—that's extremely gratifying.

All Other Photos: John Fowler 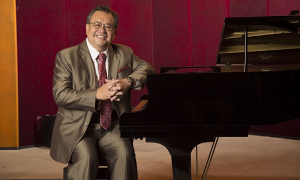 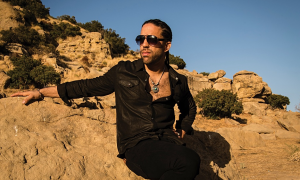 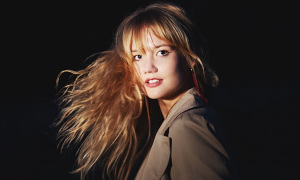 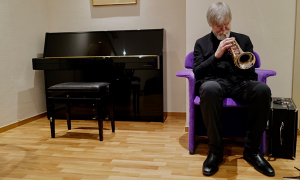