John Dikeman And The Origin Of The Species

By MARK CORROTO
June 28, 2019
Sign in to view read count
If we were to go searching for saxophonist John Dikeman's spirit animal, we might have to bypass beast for sapien. Let's just say his spirit animal is the father of punk, Iggy Pop. Like early music by The Stooges, Dikeman's sound makes reference to the music of both Albert Ayler and Pharoah Sanders. It's a shame we cannot go back in time (he was born in 1983) to substitute Dikeman for saxophonist Steven Mackay on Fun House (Elektra, 1970). The American-born (Wyoming) musician was schooled by Milford Graves and Joe Maneri before taking up residence in Amsterdam. While he might fly a bit under the New York/L.A. jazz radar, Dikeman has made significant inroads bringing the New Dutch Swing mentality to listeners. He can be heard in Universal Indians (with Jon Rune Strøm, Tollef Østvang), The Wayne Horvitz European Orchestra, Twenty One 4tet (with Luis Vicente, Onno Govaert, Wilbert De Joode), Spinifex, Cactus Truck (with Jasper Stadhouders, Onno Govaert) and with many other European musicians including Dirk Serries, Colin Webster, Andrew Lisle, Alan Wilkinson. His collaborations with American artists include William Parker, Joe McPhee, Jeb Bishop, Joshua Abrams, Jason Roebke, Mike Reed, and Frank Rosaly.

Like Iggy Pop, there is rawness about Dikeman's sound. More beast of prey than beast of burden. But also, like Iggy's secret membership in Mensa, Dikeman approach rises above the punk sensibilities of loud, fast, and out of control. Below are several new brief recordings Dikeman is selling at his shows. Interestingly, you have to find John Dikeman to find some of these discs.

Clocking in at a brief 19½ minutes, this blistering disc by the trio Cactus Truck was recorded live at the Energetik House Of Culture in Russia in July 2015. The trio of Dikeman, guitarist Jasper Stadhouders (Ken Vandermark's Made To Break) and drummer Onno Govaert are augmented by Russian bassist Wadim Dicke. Their rip, tear, crunch sound takes as much from Ornette Coleman's Harmolodics as it does from the anarchist punk band The Ex. Everything about Cactus Truck can be heard on the appropriately titled thirty-seconds of "The Short One." It recalls both The Minutemen and John Zorn's Naked City band, with the speed and force of a punch to the bread basket. Stretch that beating out to nineteen minutes, and "The Long One" brutalizes (with love) your ears with a certain shock and awe capable of raising Peter Brötzmann's eyebrows. Stadhouders guitar attack is not unlike that of Sonny Sharrock's Machine Gun with Govaert in constant motion applying a downpour of drumming and Dicke pulsing the affair. Halfway through Dikeman drops in "La Marseillaise" and the ghost of Albert Ayler has risen. Stick a pin in here because Dikeman may just be the reincarnation of the Holy Ghost. To quote Ayler, "Trane was the father. Pharoah was the son. I was the Holy Ghost." 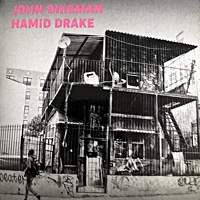 It was a natural fit pairing saxophonist John Dikeman with Hamid Drake. The drummer can be heard in duo with a who's who of free jazz improvisers like Peter Brötzmann, Fred Anderson, Joe McPhee, Kidd Jordan, Charles Gayle, Mats Gustafsson, etc. etc. It is only natural Dikeman and Drake record together. We can find two previous trio releases with bassist William Parker, Live At La Resistenza (El Negocito/Tractata Records, 2015) and Cleaning the Mirror (Otoroku, 2015).

This recording from February, 2018 at Chicago's Slate Arts is one 37-minute set. The music takes us to the free jazz loft scene of the 1960s and 70s, when the giants Rashied Ali, Sunny Murray, Ronald Shannon Jackson, Frank Lowe, Marion Brown and Arthur Rhames walked the earth. As with the names listed above, Dikeman is capable of a devastating saxophone attack, but with Drake's escort, the blast radius is contained. The drummer draws from an internal pulse, a sort of humanitarian vibration that coats the sound with an Albert Ayler love cry.

Spiritual completes the circle that is the music of John Dikeman. As with the ecclesiastical influence in Albert Ayler's music, Dikeman shares a certain spirituality in his free jazz. Together with pianist Ernst Glerum, who took over Misha Mengelberg's chair after his passing in the ICP Orchestra, the saxophonist explores some traditional spirituals. The music comes from the same impulse as Ayler's Swing Low Sweet Spiritual (Osmosis Records, 1971), Archie Shepp/Horace Parlan Goin' Home (SteepleChase, 1977), and David Murray Spirituals (DIW, 1990).

Dikeman and Glerum allow you to set aside any aversion to sentimentality. That is probably where faith (God or your fellow man) come into play. But then Gospel has always played that role. Dikeman applies the perfect amount of vibrato and when needed works the upper register to great effect. The sympathetic paring at the Bimhuis in Amsterdam in 2018 thrills the audience and it's twenty minutes of music leaves you wanting so much more.

Another side of Dikeman's world comes to play in the sextet Spinifex. The bands long tenure has produced four previous recordings, all on the TryTone label. On their previous release Amphibian Ardour (2017) the band refashioned two compositions into Sufi traditional music of Kurdish (Iranian) origin, and the Qawali traditions from Pakistan. Here they follow up with an entire album's worth of the same. The music trades-off tight composed organization with blistering improvisation. The tight arrangements recall the Vandermark 5 recordings of the mid-2000s, where organization championed robust improvisation. Credit Gonçalo Almeida's solid bass platform and together with Philip Moser's drumming the Eastern sounds swing, or rock-out.

Tracks: The Long Track; The Short One.

Tracks: I Wish I Knew What it Felt To Be Free -Psalm; Angels Watching Over Me; Old Rugged Cross.