John Coltrane: His Life and Music

By AAJ STAFF
February 24, 2004
Sign in to view read count
[ Submitted on behalf of Gene Lees.] 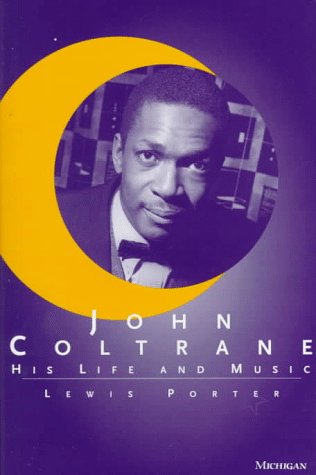 John Coltrane: His Life and Music

Thirty-one years after John Coltrane died, just short of forty-one years old, he remains an enigma, not to only to me but to the various persons who have attempted to capture his character in books. There are, with the publication of Lewis Porter's John Coltrane: His Life and Music, eight books in English about the man. None of them, including Porter's, give you much insight into his personality.

If you are looking for a light read, skip this book. There is comparatively little about his private life, and some of that is speculative.

The emphasis is entirely on the music, and I would suggest that you don't even pick up this book unless you are a musician with considerable understanding of harmony and the ability the read musical notation. But if you are a musician, particularly a jazz musician, hasten to your bookstore and get it, and prepare to spend not days, not weeks, but months studying it. It is the finest musical analysis of a jazz musician's art I have ever read. It is brilliantly done. In addition to being a responsible scholar, Dr. Porter is associate professor of music at Rutgers University, he is a jazz musician. He is a pianist and for fifteen years he was a working saxophonist. This shows in every detail of his discussion of the work of a man who was a great saxophonist, in some opinions the greatest of his generation.

I can't say that I knew Coltrane well because I'm not sure it was possible to know him well. We certainly were on cordial terms, and he would now and then come to my home in Chicago for dinner during the years I was editor of Down Beat magazine. I remember him as everyone Porter interviewed remembers him: gentle, articulate when he chose to speak but usually very quiet, and astonishingly modest. It has always baffled me that the most mediocre musical talents often have the biggest egos. But those of brilliant ability are inclined to be unprepossessing. Perhaps it is because they are always pushing to the outer periphery of their abilities, and the art itself makes them modest. John certainly was that way, and Porter quotes him a number of times as asserting that he was searching and had not really found what he sought, musically or philosophically. I remember listening to Bartok's Music for Strings, Percussion and Celeste with him. He hadn't heard that piece before, although he was very familiar with Stravinsky's music (as most jazz musicians are). He listened in complete absorption while my son, then about three, crawled up on his lap and made himself comfortable. That is how I remember him: completely open to a little child, and gentle. Frankly, I somewhat adored John. He was a lovely person.

That he was a former heroin addict is widely known. He broke the habit on his own, and early, though he began using (and this I did not know) LSD in the later years, possibly in search of that mystical experience he was seeking through music. John's music was essentially a religious search, and he was fascinated, as Porter documents, by all the religions of the world. He was by the same token interested in every kind of music he encountered. He named one of his children Ravi (himself an outstanding and underrecognized avant-garde saxophonist) after the great sitar virtuoso Ravi Shankar, one of John's friends.

Coltrane emerged as a major jazz figure in the late 1950s. Born in North Carolina, he developed as a musician in Philadelphia in company with another important saxophonist, Benny Golson, his lifelong friend. It was his membership with the Miles Davis group that pulled people's coats, to use an old jazz musician's phrase, to his emerging brilliance.

John was said to play with a hard tone, and some referred to his playing as angry. This puzzled him. He said to me, "Why do they say my playing is angry? I'm not angry at anything." This bothered him enough that he said it to other's as well, according to Dr. Porter's book. I thought John had an exceptionally pretty sound. I attended one of his record sessions entirely devoted to ballads; indeed I was there because John wanted me to write the liner notes for it, which I did. I remember that session (and the album documents my impression) for enthrallingly tender playing. It will stay with me all my life. He also did an album with the late singer Johnny Hartman in which this aspect of his work is again evident.

But he could play with incredible fire. He was, at least in his early years, deeply interested in arpeggiated chords, and would give an impression of piling one chord on top of another (although that obviously is technically impossible on the saxophone) with such rapidity that writer Ira Gitler called it "sheets of sound," a term that has stuck ever since. He also played at enormous length, his solos lasting fifteen minutes or more. My Favorite Things, recorded at the Newport Jazz Festival in 1963, is 17 minutes 24 seconds long. This used to annoy Miles Davis, leading to a rather famous exchange: he told Miles that he'd sometimes get into a solo and wouldn't know how to get out of it. Miles reportedly replied, "Try taking the horn out of your mouth."

John's religious quest continued to the end. He began to eschew the steady beat of jazz for a freer approach, and it lost him some of his audience " and indeed some of his musicians. The magnificent and influential pianist McCoy Tyner left at the end of 1965 and then great Elvin Jones, his drummer for many years, left in 1966, both of them using the same phrase about the group in interviews, calling the group "a lot of noise."

When Coltrane came up, jazz was full of major and highly individual musicians. There is nothing to compare to this abundance of riches today, and many of its best- known younger practitioners are playing what some have called retrojazz, mining the past. It may be that there is nothing left to do. It is ten years short of a century since Arnold Schoenberg began writing music that avoided tonal centers; musicians may find it interesting, but the public has retained an unshakable indifference to it. Apparently there is so only so far the collective public ear will follow the musician away from tonality.

Serious music of all kinds is in trouble. Classical radio stations in the United States are turning into a kind of high-class music, designed to soothe the nerves of those who grew up on rock and know nothing else. There are fewer and fewer radio stations that play jazz in North America. In Los Angeles there isn't one; in the mid- 1940s, there were forty such stations in that city. Major book publishers have no interest in jazz or for that matter even classic popular song. University libraries, including that at Yale, are taking up the slack. When the ASCAP Deems Taylor awards for books on music were made last fall, eight of the ten went to university presses. Dr. Porter's book is published by the University of Michigan Press.

The Miles Davis group circa 1959 gestated three major jazz influences, Miles himself, Bill Evans, and John Coltrane. We have not seen their like again, and we're not likely to. Though skillful jazz players will continue to emerge and struggle to make a living, there is a growing uneasy feeling in jazz circles that this music is at the end of its rich creative run: approximately 70 percent of CDs sold are reissues of music recorded decades ago. If it is over, Coltrane must be viewed historically as one of its last great innovators.

And Dr. Porter's book is a superb analysis of what made him so. It belongs in every music school, and certainly every jazz musician should read "no, study!" it.