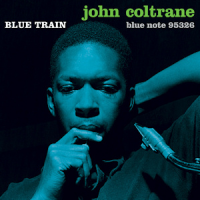 Except for one album—and it's a classic.

Blue Train is one of a handful of Coltrane's best-known and best-loved works. It came in 1957, just as Coltrane was making his name with Miles Davis and Thelonious Monk, and it features a terrific sextet. It's Coltrane's only record as a Blue Note leader, and if you love hard bop, you'll like Blue Train.

This is an album very much of its time and place. 1957 was a pretty spectacular year for jazz. It's the year of Miles Davis' Walkin,' Cookin,' Round About Midnight and Miles Ahead, [[Sonny Rollins]]' Way Out West, Ben Webster's Tenor Giants and Charles Mingus' Tijuana Moods. It's also the year of a whole bunch of great hard bop on Blue Note by Jimmy Smith, Hank Mobley, Lee Morgan, Paul Chambers and others. Earlier in 1957, Coltrane even played as a sideman to Johnny Griffin, Mobley and Morgan on A Blowing Session.

Hard bop was king and Blue Train is a top-notch example of the genre by some its best practitioners: Coltrane on tenor sax, Lee Morgan on trumpet, Curtis Fuller on trombone, Chambers on bass, Kenny Drew on piano and Philly Joe Jones on drums.

It starts with the title track—a 10-minute blues. But what a blues! The opening unison theme sounds like typical Blue Note bop, then Trane starts his sublime, sheets-of-notes solo. This isn't your grandfather's Blue Note. Morgan follows, doing his best Dizzy Gillespie impression, all fire and speed and wonder. Fuller and Drew take their turns and soon enough the best song on the album is over.

Then the pace quickens with another Coltrane original, "Moment's Notice." It's a lively toe-tapper with long, marvelous solos by Fuller, sounding very much the protégé of J.J. Johnson, and Morgan, again bebopping nicely. "Locomotion" is a showcase once again for Coltrane's unique sound and Fuller's bop trombone.

Two more tracks complete the album. "I'm Old Fashioned" is a sweet ballad, showing Trane's softer side, and the final is another feverish Coltrane original, "Lazy Bird." Though the CD has only five tracks, each one is between 7 and 10 minutes. There's plenty of room for the soloists to stretch out.

So, is Blue Train the greatest hard bop record ever? No, not really. 1955 to 1960 produced scores of fantastic bop, on Blue Note and other labels, that could just as easily claim the title. Despite Coltrane's unique sound—no one sounded remotely like him, even in 1957—Blue Train is still pretty standard bop. It's a great, fun record, but not radically innovative.

It is certainly not Coltrane's greatest record. Three years later in 1960 came Giants Steps, then My Favorite Things in 1961 and A Love Supreme in 1964. Good as it is, Blue Train was just one high point in an amazing career—though it might be the most accessible of Coltrane's great records.

Impulse Records may be, famously, The House That Trane Built, but early in his career Coltrane did very well by Blue Note, too.

Availability: Very easy to find, and in many editions