John Coltrane: A Deeper Look Into His Iconic Album A Love Supreme 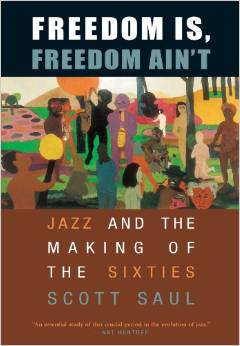 This year marks the 50th anniversary of John Coltrane's album, A Love Supreme. Here is a critical engagement of Coltrane's 4th movement entitled "Psalm" by UC-Berkeley professor and author Scott Saul. The excerpt is taken from his award winning book entitled Freedom Is, Freedom Ain't: Jazz and the Making of the Sixties.

"Psalm" extends the recitative texture of the opening moments of "Liberia" over its entirety. For seven minutes, Coltrane sings rubato over Jones's splashing cymbals and rolling timpani. Because "Psalm"'s static harmonies limit the eventfulness of the piece, we are especially attuned to its larger dynamic, the drama of a saxophone preaching to its congregation. In this case, of course, Coltrane has literalized the metaphor of his saxophone as the voice of a preacher, with his poem "A Love Supreme" serving as his sermon. We can appreciate "Psalm's" ritualized beauty—how Coltrane's phrases, for instance, approximate the rise and fall of a preacher's cadences in the black church—but still wonder whether "Psalm" succeeds as the exemplary piece it was meant to be.

Can we assimilate its journey of spiritual inwardness and self-purification? The musical evidence suggests that "Psalm" defies literal emulation: few jazz musicians have performed "Psalm" since its 1964 recording—a telling sign, given that many free-jazz ensembles from the mid to late sixties did try to simulate the free form of Coltrane's less popular later suites like "Ascension," while almost any contemporary jazz pick-up group can wing through early Coltrane standards like "Blue Train" or "Equinox." A Love Supreme seems like such an intensely personal religious statement that to cover it would require the kind of chutzpah that does not shrink from the accusation of sacrilege. But perhaps more forbiddingly, "Psalm" is an oddly terminal performance, one that brings us to a limit of stillness that is difficult to aspire to.

Its static harmonies and static rhythms convey the integrity of an ensemble that, remarkably, has freed itself from the pressure to be original; yet they also settle the musicians into a sort of entrapment, a condition of purity that forces them to give up so much. The one voice on "Psalm" allowed substantial room for exploration is Coltrane's—and even here his notes are tied to the rhythms and meaning of his pre-composed poem. Coltrane's saxophone playing even seems to admit this difficulty, that the pursuit of integrity—if taken to its logical extreme—is hard to sustain and pressures the self into brittleness. It's fascinating to consider that, at moments of greatest supposed musical resolution, Coltrane resorted to effects that split his voice in two or otherwise doubled it. At the end of "Afro Blue" he trilled until he seemed to be singing two divergent notes at once. At the culmination of "Acknowledgment," he dubbed a second voice over his mantra. And at the end of "Psalm," in the last moments of A Love Supreme, he overdubbed a high C that rode above its final flourish, the breath after its "Amen."

In the context of Coltrane's entire body of work, these moments may seem trivial, yet they point to a productive tension in his aesthetic. While Coltrane largely created a style of jazz that argued for single mindedness and against the ambivalence of double consciousness, at these moments he seemed to suggest something quite different: that the splitting of one's self was the final frontier of a self in extremis, a kind of rebirth. In a less mystical vein, we might say that these moments of voice-splitting and voice-doubling signaled that Coltrane's integrity was not an end in itself, but a means to fresh discovery. The split tones were his way of ending his musical journeys by pointing to another fork in the road. Thus Coltrane's refusal to stand pat with the innovative form of A Love Supreme or, before it, with the harmonic experiment of "Giant Steps," the modal jazz of "My Favorite Things," and so forth. The pilgrim moved on.

Courtesy of Scott Saul. Excerpted from Freedom Is, Freedom Ain't: Jazz and the Making of the Sixties (Harvard University Press, 2004).