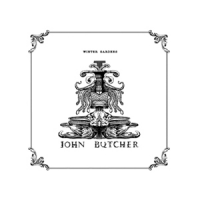 Just as they say about London buses, you wait ages for one to come along and then two arrive at once. Hot on the heels of Bell Trove Spools, comes another John Butcher solo album, Winter Gardens. The main difference between them is that this one is a vinyl LP release rather than a CD. Otherwise, there are considerable similarities; like its predecessor, Winter Gardens features concert recordings from two separate locations, Vogel Hall, Milwaukee, Wisconsin in October 2011 and St. Anne's and St. Agnes church, London, from two months later.

Together, the four tracks—two from each location—provide an excellent insight into Butcher's music. He plays tenor and soprano saxophones, either playing each of them "straight" or combining them with electronics, thus giving four possible permutations; each of the four pieces features one of those. On the two longer tracks from London, Butcher plays without electronics, while the two shorter Milwaukee tracks each employ them. Side one opens with "Sporangia (high)" from London, the bracket indicating that it features soprano saxophone. As so often in a live setting, Butcher begins tentatively, taking time to explore the space he is playing in. So, for a prolonged period at the start, we only hear suggestions of breath punctuated by occasional high notes being sent out to test the church's resonances. Once he has got the measure of the acoustics, Butcher steadily becomes more exploratory, sending out a series of melodic fragments and then interacting with the echoes of them. But even during these, he is constantly exploring and experimenting with pitch, timbre, duration and attack to test out the responses of the building. Although they are listed as Butcher solo recordings, records like this are better described as duos between the saxophonist and the space in which he is performing.

Side one is completed by "Sea Cone," from Milwaukee, a quite extraordinary feature for feedback tenor saxophone. Once he has found the "sweet spot" where his miked-up tenor is feeding back reliably without tipping over into unwelcome screeching, he exploits it perfectly, reeling off a free-flowing solo which should stand as a paradigm of the possibilities of this method of playing. Using no breath, only feedback, he generates different tones by fingering the keys and uses them to construct a satisfying piece that demands to be heard again and again. At times, the rhythmic sounds of the keys being depressed combine with the resulting tones to produce a rich soundscape that belies that it was produced by a saxophone. It is one of those tracks which is waiting to ambush some poor soul in a blindfold listening test; beginning to listen some way in, it would be very easy to believe that, rather than a saxophonist, one was hearing a master percussionist duetting with an electronicist. Amazing!

Flipping the disc, we find "Sporangia (low)"—a worthy companion piece to its namesake, displaying similar strengths and experimentation; as before, the piece begins in subdued fashion—this time, with Butcher rhythmically tapping the reed of his tenor sax before starting to blow. The piece gradually increases in depth and detail of sound as he plays a melody line in which the qualities of the tones and timbres are more important than the notes themselves. As ever, Butcher's technique is jaw-droppingly good but his music never sounds as if it is merely a technical exercise; instead, that technique is employed to create an irresistible narrative that sweeps its listeners along, creating a very satisfying listening experience.

No other saxophonist sounds remotely like Butcher, meaning that he is number one in a field of one. All of his solo albums are required listening. This is another fine addition to his canon.