All his duos demonstrate the saxophonist's creativity and responsiveness to his playing partners. So these two 2010 examples, each with a long-standing partner, are particularly welcome. 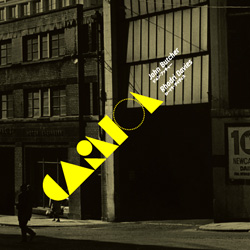 Butcher and harpist Rhodri Davies first played together in Butch Morris' London Skyscraper in 1997, then recorded as a duo in 2000 at All Angels leading to the CD Vortices and Angels (Emanem, 2001.) The pair have since toured and worked closely together. In the years after their All Angels recording, they each moved away from straightforward acoustic playing, exploring the use of electronics and extended playing techniques, as at the 2008 Self-Cancellation event curated by Davies. Consequently there has been convergence between the sounds of their instruments, and it is this blurring of boundaries that the two explore on Carliol.

The most immediately striking features of the first six tracks is their restraint and the care that has been taken with the sounds of the two instruments. Consequently, there are few shocks here as sounds gently ebb and flow and overlap. Generally, Butcher and Davies opt for sounds that complement each other rather than for dramatic contrasts. Some sounds are identifiable as from saxophone or harp, particularly for those who have seen Butcher or Davies perform live, but there is a grey area in between where the sounds could be from either or both.

The only track on the album that may make listeners sit up sharply is the closer, "Distant Leazes," on which Butcher introduces a passage of quacking tones which contrast dramatically with Davies' smooth-toned Aeolian harp. Reading the sleeve's small print reveals the explanation: the harp track was recorded by Davies in August 2007 with Butcher adding his saxophone to it in April 2009. Despite the surprise of the contrast, sax and harp work well together; the track makes a contrasting coda, serving to highlight just how tranquil and harmonious the preceding six tracks have been. 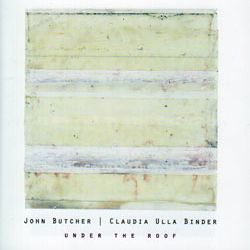 This is their first duo recording together, but Butcher and pianist Claudia Ulla Binder go back over a quarter of a century. Studio-recorded in August 2008 in Zurich, engineered by Martin Pearson—pianist Keith Jarrett's current engineer—Under the Roof clearly benefits from the duo's time spent together, and the care lavished on faithfully capturing the sounds of the instruments. Butcher and Binder sound comfortable together, familiar enough with each other's playing to avoid any getting-to-know-you moments. Everything about the album is beautiful, right down to the minimalist cover art by German artist Michael Eul.

In contrast to Carliol, the sounds here are recognisably from two distinct acoustic instruments. As well as playing the keys Binder plays inside the piano and also makes use of preparations. As ever, Butcher conjures a range of sounds from his horns by varying his embouchure and breathing techniques. Across 15 comparatively brief tracks (the longest under seven minutes, the shortest under two) the pair produce a vast array of sounds. The number of tracks, and the brevity of some, allows the pair to mix and match many contrasting aspects of their playing.

"Skylight" is subdued and restrained; full of slowly evolving tones, it is quiet enough to qualify as eai. At times, as on "Topee," Binder almost adopts the role of accompanist to Butcher's soloist. More often, as on the opener "Lofty," they produce conventional duets in which they are equal partners in dialogue with each other.

The only complaint some might voice is that a few pieces feel as if they end too soon and have great potential to be developed further. The barnstorming "Leak" is an obvious example; it is catching fire and starting to get really exciting when it stops, with Butcher in full flight. Across the album, there is a clear pattern: the longer a track is, the better; none of the tracks outstays its welcome.

The solution is a simple one: Butcher and Binder should waste no time in recording together again; there are enough fruitful avenues here for them to explore over several albums. More!