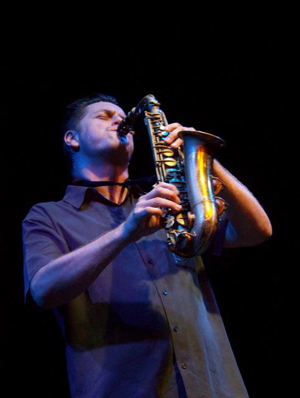 Alto saxophonist John Berndt of Baltimore, Maryland is a master geometer, and he applies this sensibility to sound. There is a solipsistic quality to his efforts—at work even when he is playing with others—which makes for astounding solo forays and more or less interesting collective endeavors, depending on whom he is playing with. At Fleisenberg Floft in South Boston's Fort Point Channel he offered both, along with a final section of electronic "club music," which he characterized as being "to pulse, what M.C. Escher is to depth."

Pulse and depth also characterized a solo set consisting of three pieces rife with harmonics and microtones. Berndt's studies with fellow altoist Jack Wright, from whom he acquired free tone and texture, and Henry Flynt, who allowed him to develop the entrancing, charmed quality he gives to a base of energy music, were evident. His solo numbers were multifaceted and multi-layered, and the first had a particularly three-dimensional quality. The tone itself was a beautiful weave of sonic wool which, to alter the metaphor, was broken into equal-length solid blocks of phrases that fit together like Legos in a toy castle, the castle itself a maze of halls and chambers.

The second piece generated entirely from a pivot point from which the notes shot out like sparks from a sparkler, or bursts of color from a Roman candle. Berndt is a deep thinker and his work is high-minded. It fosters thought, replicating it the way RNA replicates DNA. The music folds itself into individual reveries as the mind comes back and forth from its own depths, into the sounds that had imbricated them. The third number focused on tone, almost self-referentially, allowing an opportunity to conceptually bring the entire set together.

Set two featured a quartet, with Joshua Jefferson on alto sax, Flandrew Fleisenberg on drums and Forbes Graham on trumpet. Berndt was fortunate here to have artists of his own caliber, for one thing; but for another, musicians who purveyed an ethic of sharing, something it would appear does not come so naturally to Berndt. At times he appears to lack trust in his collaborators, feeling that they will somehow drop the ball or let a set slide.

Nothing like that to worry about with these three. Jefferson held down the fort in this set, laying down a pulsing, even funky, continuous but modulating line on sax, tasteful and tactful but at the same time ensemble-defining. Graham was very sparse here, laying out much of the time but at the ready to save a situation should it go awry, a decided forté. Fleisenberg applies the cerebral quirkiness of Eric Dolphy to the at once cool, but hard swinging sensibility of Nasheet Waits. Like Waits, he is utterly unobtrusive, sensed dimly, as the tumbling waves of the sea. Ultimately, this power, there all along, comes forward, but only to redirect traffic, as it were, and then to subside again like the sea.