By HRAYR ATTARIAN
September 1, 2007
Sign in to view read count 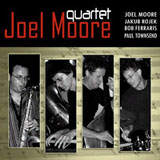 Certain musical works are meant to be thought-provoking and emotionally moving—even disturbing; others are meant to be soothing and ear pleasing. Joel Moore Quartet's eponymous CD is of the latter kind. The music is a cross between later day soul-jazz and contemporary smooth sounds, with laidback tunes where the improvisation rarely ventures far from the melody, and even when it does it stays in familiar territory. The music is consistent and the tracks do sound similar to one another. The album closer, "Catchin' the Trane, stands out as the most adventurous of the lot.

Moore's tenor tone is derivative of Grover Washington Jr. during his Mister Magic (Mojazz, 1974) days, even though his solos do not have as much of a bite. The bass and the drums provide solid, unwavering support to both the leader and pianist Jakub Rojek, who stands out in this group of extremely talented musicians, primarily because his improvisation is the most adventurous.

The sound of the CD is so pristine that it almost feels as if one is listening to the musicians face-to-face. Joel Moore Quartet is a pleasantly tame recording by talented musicians that is meant to clear the mind and entertain, rather than engross, provoke and disturb. The feeling this CD evokes is that of a relaxing evening out doing nothing in particular. Everyone needs that once in a while.