Joe Walsh and Bad Company: One Hell Of A Night Tour 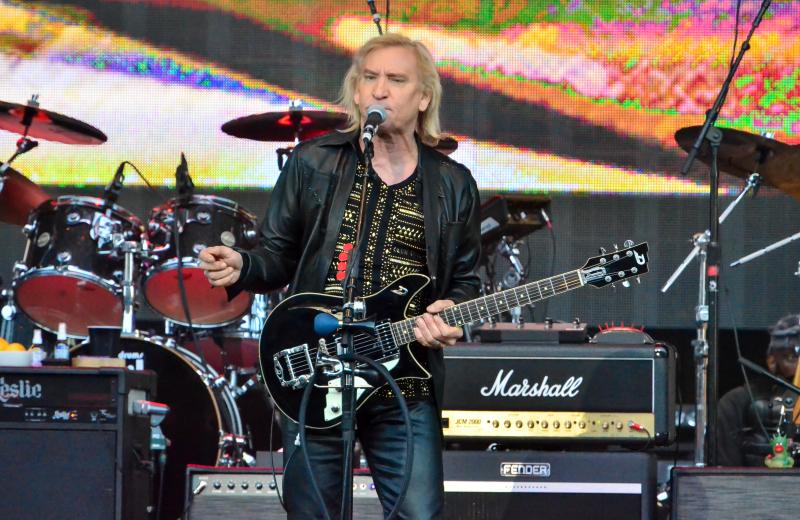 On this pleasant mid-June Evening it was "Classic Rock Hitmakers Night" at the Nikon at Jones Beach Theater. Joe Walsh and Bad Company produced a relentless hit-after-hit onslaught that had the mostly middle-aged crowd thrilled beyond its wildest dreams.

Walsh led the evening off. Backed by a large band which included bassist Larry Young, drummer Joe Vitale, guitarist Waddy Wachtel, Jimmy Wallace on keys, Chad Cromwell on guitar and four back-up singers, the irreverent guitarist greeted the crowd with a hearty, "Good morning! I'd like to thank Major Jones for letting us use his beach!" He then launched into "Walk Away" and from there until the end of his set, it was all high energy, balls-to-the-wall rock 'n' roll.

Walsh played his solo hits, his James Gang hits, some Eagles tunes (of course they were hits) and even his rockified version of "Bolero" (that was included in the James Gang suite, "The Bomber"). Throughout the evening, Walsh was in fine voice and his guitar chops were, as always, second to none. His performance had something for everyone: guitar players were given a clinic, guitar collectors were treated to seeing him play his impressive collection of custom instruments and the song selection was top-notch.

In addition to "Walk Away," the 68-year-old Walsh played "Analog Man," the title track from his most recent studio effort (Fantasy Records, 2012), the James Gang masterpiece "Funk #49," his biggest solo hit "Life's Been Good," a trio of selections from his Eagles days—"In The City," "Take It To The Limit" (touchingly dedicated to Glenn Frey who died early in 2016) and a rocking, killer version of "Life In The Fast Lane" which closed the main set.

Walsh's encore was what is, arguably, considered his second greatest solo song: "Rocky Mountain Way." The audience jumped to its feet and sang every word along with Walsh. 50 and 60-year-old men were playing air guitar in the aisles and Walsh, with a huge grin on his face, played it hard and forceful like a condemned man devouring his last meal. When the song ended he waved to the crowd, offered his thanks, took a bow and was gone. Many in the crowd were hoping for an appearance by Walsh's brother-in-law who was scheduled to play in nearby Staten Island on the following evening. Sadly, on this evening, Ringo Starr did not make an appearance as he had earlier in the tour, in Los Angeles.

After a short intermission, Bad Company, led by the powerhouse vocals of Paul Rodgers, the bombastic backbeat of Simon Kirke's drums and Rich Robinson (formerly of the Black Crowes, sitting in for Mick Ralphs) on guitar, along with guitarist Howard Leese (formerly of Heart) and bassist Todd Ronning, proceeded to rock the house. Picking up as though it were 1982 following the release of Rough Diamonds (Swan Song Records), Bad Company, like Walsh earlier in the evening, delivered a strong rockin' hits-filled set that opened with a robust "Live For The Music."

Rodgers was in fine voice throughout the evening as he strutted across the stage while nearly turning back time as he spun the mic stand as if it were the early '80s. The set reached as far back as the band's self-titled Swan Song Records debut album (1974) with letter perfect renditions of "Ready For Love" with its slow-burning groove, the rollicking "Movin' On" and the acoustic ballad "Seagull." "Feel Like Makin' Love" (which Rodgers introduced with the "How's about a love song" quip) and "Shooting Star" (with the audience singing along and leading the way) from Straight Shooter (Swan Song, 1975) each made their appearances mid-set. "Run With the Pack" and "Burnin' Sky" were the lone selections from the 1976 and 1977 eponymously named Swan Song LPs. "Electricland" was the only song performed from the Rough Diamonds album, the last LP from Bad Company's golden era. Desolation Angels (Swan Song) was a very well-represented album—with its tunes virtually bookending the main set. The powerful version of "Gone, Gone, Gone," the group's second song of the evening, brought the audience to its feet (a position most never left). "Rock 'n' Roll Fantasy" closed out the main set and had the crowd bopping, grooving and singing along on the choruses with Rodgers.

The encores where the stuff that Bad Company's fans' dreams are made of. The band delivered a fantastic version of "Bad Company" (which could have and should have served as the theme song to any number of spaghetti westerns had it been released in the '60s, just a few years prior to the band's formation). The second encore was a soaring "Can't Get Enough."

Bad Company delivered a show that made the audience feel almost as though time had stood still. The band was spot-on, powerful, smooth and polished. If the crowd members had closed their eyes, they'd have felt a vibrancy that could have made them think they were at least thirty years younger.

The show which was billed as One Hell Of A Night Was just that. Walsh and Bad Company put on one helluva performance.