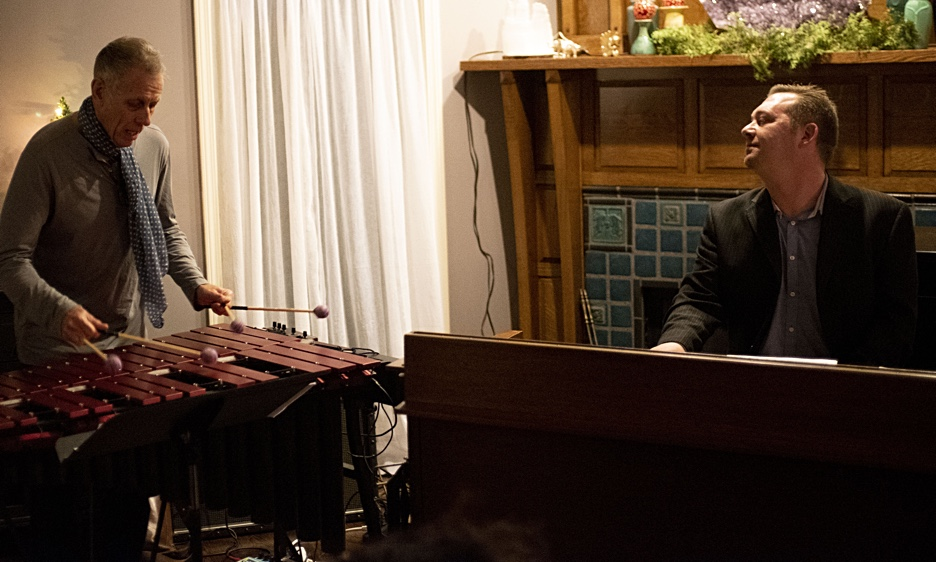 One of the key elements of jazz over the history of the music has been the social aspect that is inherent in the type of musical communication that marks improvised music. During the swing era, if you were so inclined, you could head to the popular ballrooms to dance to the big bands of Artie Shaw, Benny Goodman, Glenn Miller, or even Duke Ellington. Short of that, folks used to fire up the Victrola at home and "roll up the carpet" for a makeshift dance floor right in the living room.

Rent parties and other house events would also include jazz performers and stride pianists back in the days. So as an example of cyclical nostalgia, a group of jazz devotees are once again fostering communal jazz performances in a setting that encourages an intimate dialogue between artists and their audience. About forty minutes north of downtown Detroit, attorney Andrew Rothman's home in West Bloomfield has been serving as the location of around three to four concerts each year under the guise of the Detroit Groove Society.

Staged in Rothman's living room, a recent gathering found a capacity crowd of around fifty folks taking in the sounds of vibraphonist Joe Locke in performance with organist Pat Bianchi and iconic drummer Marvin "Smitty" Smith. A mint condition Hammond organ with Leslie sat in front of the fireplace, with Joe's vibes flanking the left and Smitty's Pearl drum kit to the right. Chairs of various kinds filled just about every empty space in Rothman's front room with early arrivers getting choice space up front on the plush love seat.

Come show time, Locke treated the evening as almost an "around the campfire" moment. Before each tune, he delivered varied and engaging stories and highlighted the meaning behind his own originals. As a tribute to the great Benny Golson, Locke's "Betty One Note" started things off with a bang. Without any kind of monitoring or amplification, the trio struck a handsome balance that allowed each trio member to openly voice their contributions.

One of Locke's inspirations, Bobby Hutcherson penned the following "Highway One" and the Latin beat was further reinforced by Smith's cowbell accents and the manner in which Locke would dampen his notes on the vibe bars. By contrast, a heartfelt "Raise Heaven" spoke in hushed tones to pay homage to the recently departed Roy Hargrove. In his spoken introduction, Locke spoke of Hargrove as being a talent "with no artifice whatsoever." No doubt, the iconic trumpeter was channeled in Locke's musical portrait.

Before the trio closed the first set with Larry Young's "Backup," Locke spoke warmly of his musical comrades. Recounting a time when he saw a young Bianchi leading a set right after the renowned Joey DeFrancesco, Locke quipped, "I just had to stay to watch that car accident." Later, he found that Bianchi was a fellow Rochester native who had been following the vibraphonist in his youth. As for Smith, Locke lamented the drummer's move to the west coast to support the band on Jay Leno's Tonight Show. As he put it, "what can you say, the money was just too good!"

Smith was represented as a composer on "Restless Soul," which opened the second set of music. Locke started unaccompanied, working through such allusions as Joni Mitchell's "Woodstock" and the spiritual "Nobody Knows the Trouble I've Seen." Bianchi would then take it straight to church with his own mystical statement sans drums. Seamlessly, Smith would next step into the spotlight on his own, feathering the melody on cymbals before developing further notions on the entire kit. Coming to a head, the results would morph into a whole group romp on Monk's "Evidence."

In his emotional recollections of the great Bobby Hutcherson, Locke reveled in his final conversations with the vibraphonist before his death in 2016. Emerging from philosophical chats on music, Locke would utilize one of Hutcherson's phrases for the gorgeous "Make Me Feel Like It's Raining." The closing "Autumn in New York" spoke at a breakneck speed with each trio member pulling out all the stops. Barely containing their enthusiasm, the end results were nothing short of a revelation and all agreed a splendid time was had by all.