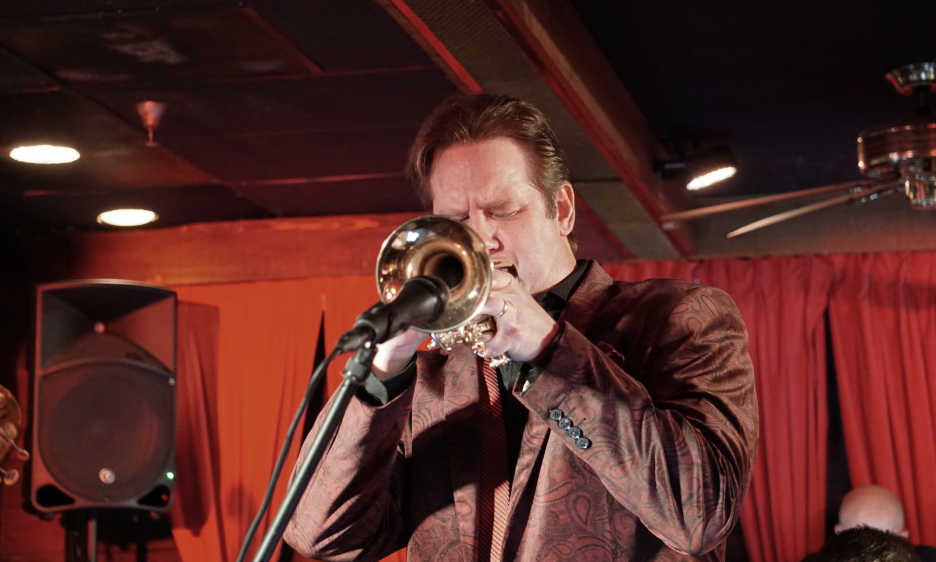 At a private evening in Atlanta, Kenny Banks Jr. played a 1912 Steinway B piano and Joe Gransden played his grandfather's trumpet and a fluegelhorn he has owned since childhood. In between Christmas tunes there was an interesting and enlightening question and answer discussion. Both musicians are highly educated, they play continuously and both have played the White House. Gransden was there just the previous week. Banks commented that the Steinway played beautifully with wonderful touch but whatever piano confronts him when touring, whether completely in tune or not, there is almost always a sweet spot somewhere on the keyboard that he can work with. No two pianos are exactly the same, so condition is a matter of degree. In answer to another question, both musicians agreed their music education is only a framework, the real music is learned by ear, learned from listening and practicing. They agreed with another questioner that young musicians straight from music schools rely too much on their education and structures, playing virtuoso a high volume of improvised notes, instead of playing the melody. "Playing all the notes they know fast is like listening to someone who talks too much" said Gransden.

On jazz content, Gransden commented there is an attitude of superiority among some jazz musicians aimed at pop music which they believe to be inferior. "The Beatles, REM, Queen and a whole range of supremely successful pop musicians owe their success to their own innovative lyrics, compositions and presentation, while the majority of jazz musicians are taking tunes from the 1930s and 1940s and embellishing them with improvisation" he said. That may sting, but it's true.

Up close, in a small room with the instruments played acoustically, as they were designed to do, every detail, breath and variation became obvious and important . A preference for the energy of live music is one thing, but receiving the sound waves directly to the eardrum from the vibrations of a hammer striking a piano string or the vibrations of a lip, carry an undeniable veracity, an overwhelming truth of sound. With sound systems almost everywhere now, that is an exceptional performance experience unheard outside the grand opera, where microphones are anathema.

Next evening, on to Johnny Scatina's Cafe 290 to hear Joe Gransden's Big Band. The room is large, the 18-piece band shared a raised area with dining tables covered with white cloths and lit by candles. More tables are two steps lower and a bar runs the whole length of the wall behind. The entrance wall is covered with signed posters from artists, and the club has a strong and loyal guest following; they were running almost completely full on a chilly Monday night in December. It was the holiday season, so that decided the set list. It may seem trite but much of the secular Christmas music was written during the Big Band era, so it was at least contemporary. They set off with Felix Bernard's "Winter Wonderland" from 1934, then owner Johnny Scatina got trapped into a chorus of Jingle Bells, which he sang very well. On the front line were the saxophones, notably John Sandfort and Mike Walton on tenors and Marla Feeney on bass saxophone, all of whom carried excellent solos. Four trombones on the middle row were topped off by a row of trumpets. To the left, Justin Varnes ran the drums with stand-up bass and piano beside him. They began "It's The Most Wonderful Time of the Year" traditionally, then changed up to a high gear swinging arrangement of their own. Mike Walton 's arrangement of Peter DeRose's 1949 song "Marshmallow World" followed next. Then they broke the Christmas mood, surprising the audience with their arrangement of the Johnny Cash tune "Folsom Prison Blues."

Big Bands playing in unison have a special magic, the volume, the swing, the density of sound. Add Gransden's smooth voice and excellent trumpet and this was a special evening. Apart from all else, we have to admire Gransden's determination and courage, still keeping a Big Band traveling and working in the modern world is a tough equation to balance.