By DAVID A. ORTHMANN
April 19, 2010
Sign in to view read count
In the notes to an unfinished novel, the celebrated 20th Century author F. Scott Fitzgerald wrote, "there are no second acts in American lives." The vicissitudes of the lives of many jazz musicians, some of whom drop out of sight for years or even decades, are exceptions to Fitzgerald's often quoted dictum. 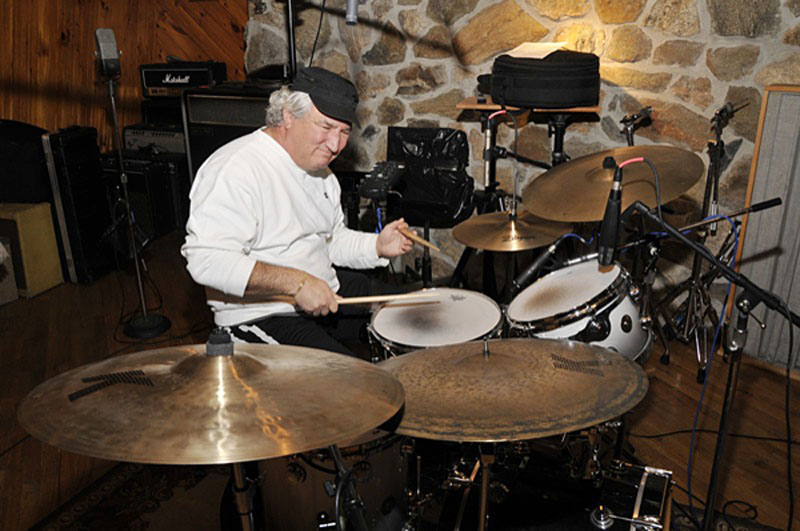 The first act of Joe Corsello's career as a jazz drummer was in the 1970s, when he worked in a number of noteworthy mainstream ensembles, ranging from Benny Goodman to Marian McPartland to Zoot Sims. He left singer Peggy Lee's band to join the short-lived jazz-rock group, New York Mary, which included guitarist John Scofield and recorded for the Arista Records label. In 1979, Corsello quit the music business and entered the Stamford, CT police department. For the next 22 years, his duties included street officer, homicide detective, and community policing.

Corsello's second act began after his retirement from law enforcement in 2001. Aside from touring and recording with Sonny Rollins, playing local gigs, and conducting clinics for the Avedis Zildjian Cymbal Company, over the past few years he's appeared as a sideman on four dates for Jerry Roche's Mighty Quinn Productions imprint.

His contributions to Ralph Lalama's 2010 Mighty Quinn release, The Audience, merit special recognition. Engineer Mark Conese of the Ambient Recording Company in Stamford, CT captured the drums and cymbals in near-perfect clarity. Working in tandem with bassist Rick Petrone, Corsello engenders a steady, level-headed kind of swing. His roots in the jazz mainstream are apparent in the way he patiently propels the band and doesn't clamor for attention. Moreover, the tidy pulse Corsello generates on medium and up tempo tracks like "Marie Antoinette," "Minor League," and "I'm an Old Cowhand" encompasses just the right amount of grit.

The cornerstone of Corsello's style is the articulate ping of his ride cymbal. A good place to hear the ride in all its glory is immediately after Petrone's solo on the "Love Thy Neighbor." As Corsello switches from brushes to sticks and starts playing straight time, the cymbal blossoms, making an exquisitely shaped sound that cleaves to the bassist's walking line and complements the light, buoyant tone of John Hart's guitar. Finding his own space amidst the two instruments, Corsello plays at a fitting dynamic level and never eclipses Petrone and Hart. When the guitarist's solo enters the tune's bridge he rides another cymbal which produces a somewhat broader hissing sound. The negligible difference between the two cymbals adds some subtle seasoning to the music.

While the ride lays down a steady, limber pulse, Corsello's other limbs are not idle. During Hart's five choruses on "Marie Antoinette" he makes a variety of comments that stand in marked contrast to the neatness and precision of the cymbal. For the first chorus or so hits to the drums are intermittent and somewhat faint. Eventually they become more frequent and start to rub against Hart and Petrone. Everything is brief, to the point, and not particularly loud. Bass drum patterns rise up and throb in defiance of the pulse. The snare snaps and spatters. A hard stroke to the tom-tom leaps out in the midst of Hart's chords.

In the absence of Petrone and Hart, Corsello departs somewhat from a conventional time keeping role on "Jome." The two minute, twenty-four second track contains his most ambitious work on the record. Unlike the freewheeling fury of conventional sax and drum duos patterned after John Coltrane and Elvin Jones, Lalama and Corsello are restrained and somewhat deliberate. Deftly moving between three cymbals, Corsello opens the track alone, implying a steady pulse and shaping overlapping rhythms into something resembling a melody. By offering clipped, bell-like, and hazy tones at a muted dynamic level, it sounds like he's whispering a secret.

When Lalama enters, Corsello gradually introduces the drums. In part because he's not thinking in terms of bar lines, stock licks, or the customary resolution of phrases, Corsello creates a zone somewhere between straight time and freer, non-linear explorations. He provides both a foundation and stimulation for Lalama and listens carefully to his partner. Familiar rhythms are offered and rapidly dismissed. The snare, bass drum, and tom-toms push and pull against one another, yet they're not particularly dense or tangled. Sometimes the bass drum is a stabilizing agent; in other instances it's a means of shoving the music forward. In one outstanding sample, the bass drum's repeated heartbeat accelerates, becomes louder and more insistent before yielding to the whiplash crack of the snare.

Because he successfully combines supportive, tasteful, and distinct individual qualities, Corsello's drumming on The Audience offers something of interest at every turn. A few more recorded performances like this will ensure his second act is the one jazz fans remember.