Joe Bonamassa at The NYCB Theatre at Westbury 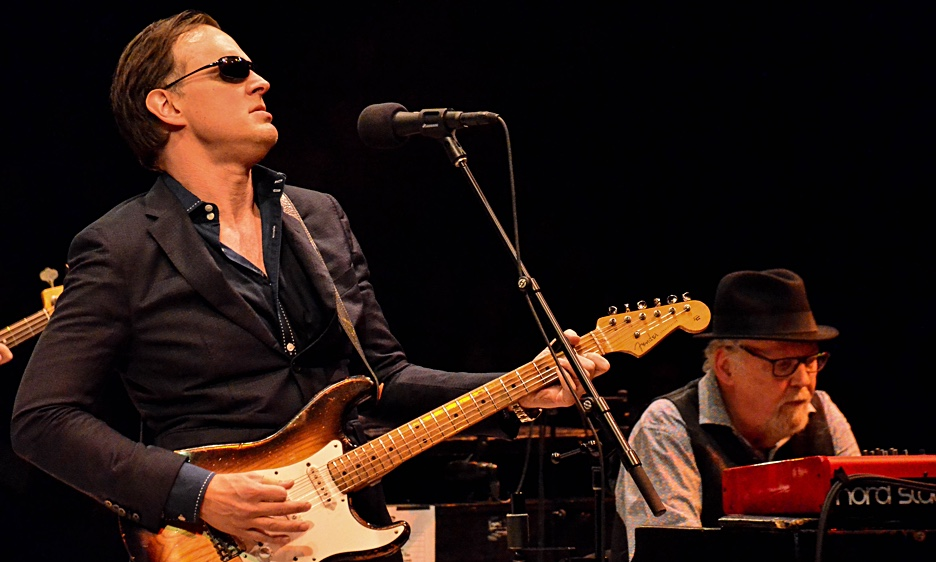 Joe Bonamassa was a child prodigy. The blues guitarist opened for B.B. King at 12-years-old. He has shared the stage with artists such as Buddy Guy, Eric Clapton, Steve Winwood, Stephen Stills, Warren Haynes, Blondie Chaplin, Derek Trucks and, of course, King. Since 2000, Bonamassa has released thirteen studio albums, four collaboration albums with Beth Hart, fifteen live albums and multiple DVDs. His CDs have reached number one on Billboard's blues charts numerous times. He is also considered to be the greatest guitarist of the current generation.

On a cool Friday evening in late March, Bonamassa delivered the first of two sold-out performances in the round at the legendary NYCB Theatre at Westbury. Appearing on the intimate venue's circular spinning stage at just after eight o'clock, Bonamassa was backed by singers Jade McRae and Juanita Tippins and a five-piece band that featured the veteran late-night television drummer Anton Fig (who held his position in the Late Show With David Letterman's house band for 29 years), keyboardist Reese Wynans (the Rock 'n' Roll Hall of Famer who played in Stevie Ray Vaughan's Double Trouble), Michael Rhodes on bass, Lee Thornburg on trumpet and Paulie Cerra on saxophone.

Bonamassa and his band burned their way through original songs and classic blues covers including the opening tune, Muddy Waters's "Tiger In Your Tank," John Mayall and The Bluesbreakers' "Little Girl," Delaney and Bonnie's "Well Well," Willie Dixon's "I Can't Quit You Baby" and an epic, almost fifteen-minute take on Led Zeppelin's "How Many More Times" that would have done Jimmy Page proud.

In addition to the choice covers, the setlist included "King Bee Shakedown," "This Train" (which featured a snippet of Jethro Tull's "Locomotive Breath" as its introduction), "Just 'Cos You Can Don't Mean You Should," "Blues of Desperation" (from the 2016 J&R Records album of the same name), "Self Inflicted Wounds" and "How Deep This River Runs."

Bonamassa mostly let the music do the talking. When he finally addressed the crowd, he thanked the audience for coming and mentioned that "I love playing here in the round, but sometimes it gets you a bit dizzy."

The NYCB Theatre at Westbury is a cozy and intimate venue, that night filled with members of what can be called "Bonamniacs" or "Bonamassa nation" and nary a single empty seat. The faithful sang along, played air guitar in the aisles, cheered, hooted, and hollered, rewarded with a performance lasting nearly two hours.

Bonamassa bringing 16-year-old Aaron Fig to the stage was the evening's unequaled highlight. He stated that he had known the young man since he was eight and that Aaron would be joining the band on the next tune. The younger Fig took the drumsticks from his father and, along with Bonamassa and the band, blew the doors off of the concert hall with an electrifying version of Tim Curry's "Sloe Gin." When Aaron was brought out from behind the skins to take a bow, the audience responded with a standing ovation. The main set ended with a tour de force version of "Last Kiss." The show ended with the killer encores "Woke Up Dreaming" and "Mountain Time."

To the uninitiated, Joe Bonamassa looks like he could be an accountant: a cool accountant in a well-tailored blue suit with fantastic sunglasses...if your accountant was an amazing guitar slinger that could make his six-string sing, howl, soar and moan. In addition to his guitar skills, this unlikely virtuoso has the voice, the original material and the reverence for the legends and history of the blues to bring it back to the masses and give it a well-deserved and needed renaissance.