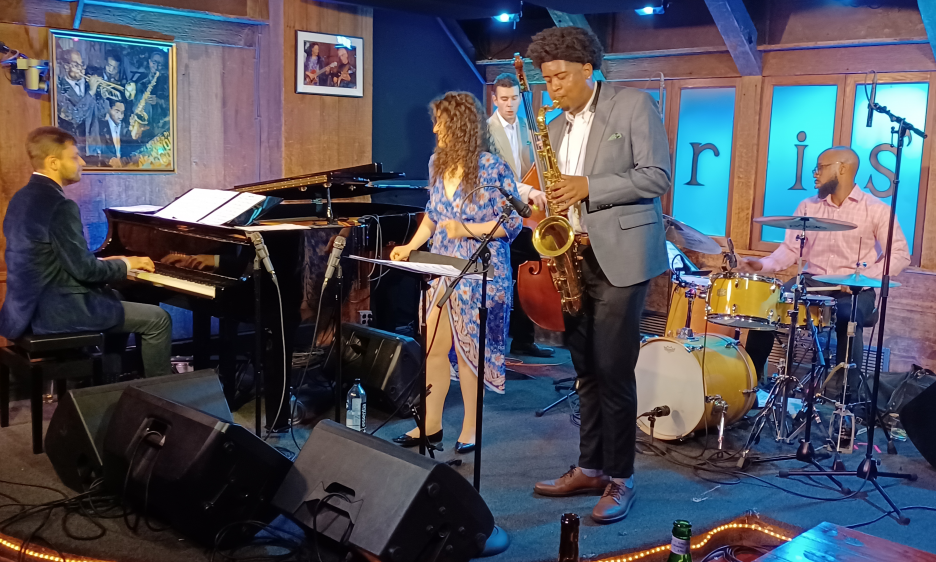 Although this reviewer recently interviewed pianist Joe Block for All About Jazz, he never heard Block leading his own group live. So he seized this opportunity to get an up close hearing at Chris' Jazz Café, where Block and many other Philly musicians came up and return periodically over the years for the good vibes.

For the show, Block put together an ensemble consisting of Abdias Armenteros on tenor saxophone, Kimon Karoutzos on bass, and Anwar Marshall on drums. In addition, the featured vocalist, Jamile, delivered both American standards and her native Brazilian songs with flair. Marshall, like Block, is familiar on the Philly scene, having once been a student at the Creative and Performing Arts (CAPA) High School. Armenteros has toured internationally with the Wynton Marsalis Septet. Karoutzos is from Greece, and has spent some time in Holland. They are all now based in New York.

Importantly, Block, Karoutzos, and Jamile have gone the route of the music conservatories, in contrast to previous generations, many of whom learned the craft from specific teachers and mentors. Their collective musical intelligence showed through in the way they gave mainstream approaches greater clarity than even the original protagonists. There was no mistaking what they absorbed in their training, and each of them had an impeccable, highly disciplined technique. It was jazz at the highest level and at the same time absorbing and exciting.

The opening instrumental number was the ballad, "Elusive," which began in slow motion but then transitioned to lively breakout solos. Armenteros revealed himself to be a solid tenor saxophonist in the traditions of John Coltrane and Charles Lloyd, and it was a pleasure to hear Block's exquisite piano technique in full flower, extensively and up close. He has resilience and agility that are beyond compare. And if he gets an idea for a unique phrase or cluster, he can insert it seamlessly in the midst of everything else he is doing.

Block then took a Thelonious Monk rarity, "Light Blue" in a way that gave it a Duke Ellington feel. It also bore a resemblance to some of the piano work of Block's Juilliard mentor Frank Kimbrough on the daring milestone album, Monk's Dreams: The Complete Compositions of Thelonious Sphere Monk (Sunnyside. 2018). Block's rendition brought out the melancholic, brooding side of Monk.

Then Jamile came on stage to deliver the Ellington tune "Just Squeeze Me" in a full-throated and resilient voice. She showed a special awareness of rhythm, flow, and inflection and a touch of Carmen McRae in the way she would highlight a particular phrase.

Jamile already has a degree of celebrity in her native Brazil where they adore singers. She sang "Chico Hipocondria" about a woman and her contrived maladies in an upbeat, highly charged way. Whether planned or not, the instrumentalists took advantage of the intensity to do some ensemble work that sounded almost through-composed. It embodied the kind of coordination that is more likely to occur on a well-rehearsed recording date than a nightclub gig.

Jamile gave the stage to the band for their rendition of Cecil McBee's tender ballad, "Song of Her," a favorite of saxophonist Lloyd. Armenteros did a moving tenor saxophone solo, comped by Block with Debussy- like pianistic filigree. The overall feeling was reminiscent of the iconic John Coltrane Quartet's way of doing ballads.

The singer then returned for "Menino Das Laranjas," which she said was the story of a boy trying to sell items to tourists on the street. Block soloed with rich pianistic imagination, able again to integrate his remarkable technique with rich improvising.

The set concluded with two Jamile vocals, "Save Your Love for Me" and "My Shining Hour." Jamile's rendition of the latter was energized by the tight coordination of the rhythm section and a hot drum solo by Marshall, which some of us were waiting for the whole evening.

To sum up, while the reviewer came with the purpose of hearing Block, this set was characterized by collective artistry and musical intelligence at the highest level, reminding us that jazz is not only a form of entertainment, but a painterly art in which the placement and sonority of every note is as important as the brushwork in a Monet painting.