Joe Alterman Trio with John Sandfort at The Jazz Corner 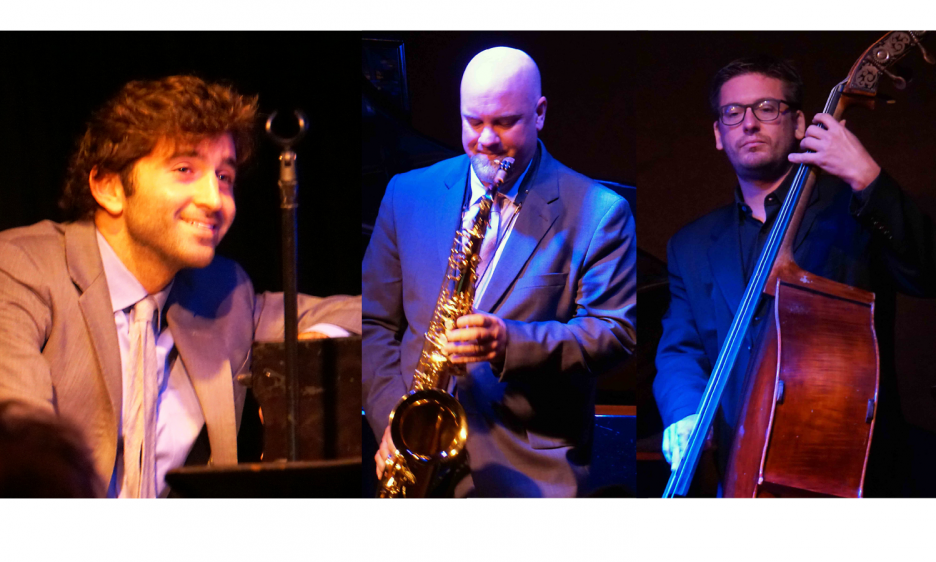 The Joe Alterman Trio played back-to-back nights at The Jazz Corner on Hilton Head Island, with special guest John Sandfort joining on tenor saxophone. The quartet played two openers together before Sandfort left the stage to Alterman on piano, Justin Chesarek on drums and Stan Piper on upright bass.

Driving the strong opening bass line Alterman led the trio into the Marvin Gaye soul standard "I Heard it Through the Grapevine," playing in his own distinctive jazz style with derivations somewhere in between blues and soul. Using the classic blues device of repetitive phrasing he built the rhythmic energy adding a heavy left hand, which sometimes carried the melody. Feeling the music, Altermans' feet were dancing. in a fast passage, his whole body moving, he came perilously close to the end of the bench when he slid down to work the lower end of the piano.

Sandfort returned to the stand to a smooth piano intro for "Time after Time." He played leaning back when blowing hard and leaning forwards until the tenor saxophone was below his knees for the intricate, quieter passages. The quartet's treatment of"Blue Moon" was reminiscent of Ahmad Jamal and earned grand applause. Following an excellent slap-bass solo by Piper, Chesarek surprised the audience by punctuating his drum solo with a sustained tambourine section before reverting to his kit.

At thirty years of age Alterman is still developing his sound, though he has the good fortune to have Les McCann as his mentor and celebrated the collaboration with a fast run on McCann's "Right On," followed by another composition by the legendary soul-jazz pianist, "Fish this Week," from the 1973 Blue Note album of the same name. Alterman's respectful response was his own composition "Les is More." An excellent brace of performances from Alterman showed how he has developed a melodic, energetic sound, which is recognizably his own.