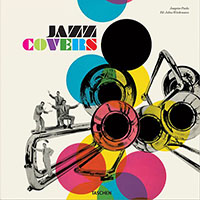 Writers Joaquim Paulo and Julius Wiedemann have assembled a stellar exhibit by way of these oversized Taschen books. The two volumes, packaged in a slipcase, are a beautiful collection of album cover art that document the global jazz scene from 1940-90. They are comprised of pristine transferred images and represent both commercial and fine art trends.

The covers evoke specific genres of jazz art, such as illustrator Stanislaw Zagorski's blue cowboy on the Modern Jazz Quartet's The Sheriff (Atlantic, 1964) and David Martin's black and blue graphic of saxophonist Lester Young's Collates No.2 (Verve, 1951). Many of the sleeves are rescued examples of all but disappeared expressionism.

Some of the most arresting art are from out of print sleeves, like the Swing label's Jazz at Massey Hall (1953) with trumpeter Dizzy Gillespie, bassist Charles Mingus, drummer Max Roach, pianist Bud Powell and saxophonist Charlie Parker The jazz giants are drawn as faces on a deck of playing cards, with only an unconfirmed credit to "Ch.D," presumably the illustrator's initials.

Other designs reflect the expansive world of composers like keyboardist Sun Ra depicted by Paul Frick's 16th century astronomy chart on the cover of The Heliocentric Worlds of Sun Ra (ESP, 1966). At the other end of spectrum is the psychedelic abstract of Don Bied on Ra's The Magic City (Evidence, 1973).

Among the most famous photography covers included are full page plates of Francis Wolff's cover for saxophonist John Coltrane Blue Trane (Blue Note, 1957) and Paul Bacon's cover for pianist Thelonious Monk's Underground (Columbia, 1968), a tableau with Monk playing in a French resistance hideout. Arnold Newman's now indelible profile portrait of singer Billie Holiday in the last year of her life for the cover of what would be her final studio release, Lady in Satin (Columbia, 1959), is still heartbreaking, not to mention still spellbinding.

Many covers mirror socio-political themes in general and social injustices in particular. One such is designer Ed Lee's scabrous cover for saxophonist Ornette Coleman's Skies of America (Columbia, 1972) with Winslow Homeresque engraving of seagulls diving into the red strips of American flag, rending the stripes and flying away bloodied, craven images.

Some of the artwork makes bold editorial statements that were probably under the radar of some observers, for example Wolff's dramatically blurred black and white photo of what could be an interracial couple on drummer Art Blakey's Like Someone in Love (Blue Note, 1960).

There are also examples of the record industry's practice in the 1950s of putting comely white models on covers of black artists' albums to pander to racist American markets. These were eventually erased by artist protests and powerful images of black culture, here represented by such iconic covers as trumpeter Miles Davis Bitches Brew (Columbia, 1969).

At the other end of the spectrum, photo glamour is fully represented. William Claxton's photos of trumpeter Chet Baker gave him French cinema mystique that has influenced any number of contemporary photographers from Annie Leibovitz to Herb Ritts. Joe Alper's cover of saxophonist John Coltrane and singer Johnny Hartman captures an intimate symmetry between the two artists.

Fred Cohen, owner of the Jazz Record Center in New York, writes that the original sleeves are hot items today, as many connoisseurs are choosing vinyl over other formats. Mosaic label founder Michael Cuscuna, who re-issued albums long after their apparent shelf-life, comments that he, like a lot of jazz fans, doesn't miss the vinyl sound, but rather the LP jacket and readable liner notes.