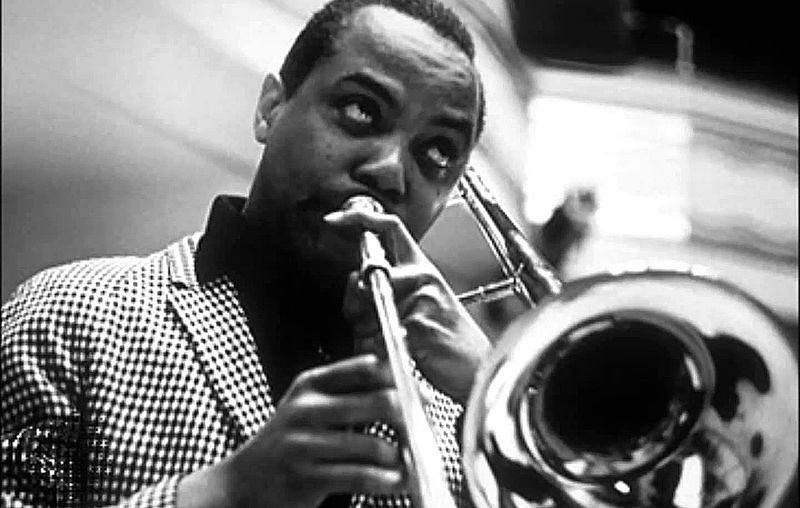 By VICTOR L. SCHERMER
April 1, 2015
Sign in to view read count
This interview with trombonist J.J. Johnson along with Joshua Berrett and Louis G. Bourgois III, authors of his biography, The Musical World of J.J. Johnson (Scarecrow Press) was first published at All About Jazz in November 1999.

All About Jazz: Congratulations to Josh and Louis on your new book—and to J.J. for now having a scholarly reference devoted to your outstanding contributions to music. Just for the fun of it, which three recordings and/or scores would you take to the proverbial desert island, if they were to be your only sources of music there?

J.J. Johnson: Hindemith's Mathis der Maler, Ravel's Daphnis and Chloe. Any of the Miles Davis Quintet recordings that include John Coltrane, Paul Chambers, Philly Joe Jones, and Red Garland. In my opinion, contemporary jazz music does not get any better, or any more quintessential than that Quintet's live appearances or the recorded legacy that they left for us to enjoy.

Joshua Berrett: My tastes here are very similar to J.J's: a mix of classical music and jazz. I would single out Brahms' Symphony No. 2, Stravinsky's Rite of Spring, and Miles Davis' sessions with Coltrane and company.

THE BOOK AND ITS AUTHORS 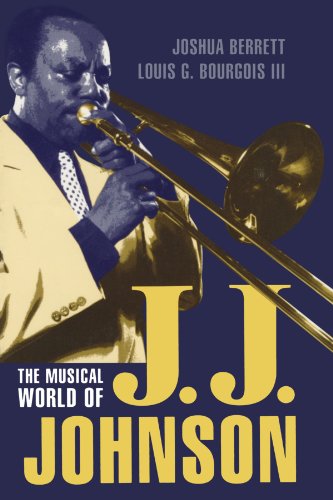 AAJ: Josh and Louis, tell us a bit about your musical background.

LB: I teach low brasses, music history, and music technology at Kentucky State University, in Frankfort, KY. It is the smallest institution in the state university system (the largest, the University of Kentucky, is about 40 miles east). For the past ten years, my professional performance is mostly free-lance, primarily with the Lexington Philharmonic Orchestra, and bass trombonist with the Lexington Brass Band (a British-style ensemble), the Vince DiMartino Jazz Big Band, and the Kentucky Jazz Repertory Orchestra (led by Miles Osland, Director of Jazz Studies at the University of Kentucky, and sort of a central Kentucky version of the Lincoln Center Jazz Orchestra). Other gigs include occasional pit orchestra work, small brass ensembles, and the like.

Josh is a violinist, but he would have to confess what his playing experience has been recently.

AAJ: Josh and Louis, how did each of you become interested in J.J. Johnson and his music?

LB: In 1973, when I started my undergraduate studies in music education at Murray State University, in Murray, KY, I became very good friends with a couple of guys who roomed together in a dormitory across from the one where I lived. One of them, Dick McCreary, was a fine jazz drummer who actually worked briefly with Sonny Stitt from what I recall. He is now a public school music educator in the St. Louis area. The other guy, Dan Schunks, was a trombonist who could blow some really nice jazz. We were all in the marching band, so we saw a lot of each other. Since my jazz experience prior to college was limited to listening to my dad's record collection (mostly Stan Kenton band recordings from the 40's and early 50's), Dan and Dick helped me along with jazz artists that I needed to know: in Dan's case, particularly J.J. Johnson as well as a few other trombonists influenced by him. So, I started collecting recordings and anything in print about J.J. (which wasn't much, cumulatively, at the time). Early on, my passion for J.J.'s jazz was a hobby. Later, it developed into much more than that.

JB: I became interested in J.J. and his music through my association with Lewis Porter at the Institute of Jazz Studies at Rutgers, starting in the late 80s and continuing into the 90's.

My deep fascination with J.J. revolves around the idea of how he has helped make jazz into such an elastic, inclusive musical art, blurring categories of style, drawing upon sources ranging from Bela Bartok, to Benjamin Britten, to blues, to Stravinsky, and much more. In a special way, he represents in my mind a kind of evolution of the work I previously published on Louis Armstrong and opera.

AAJ: Tell us a bit about how the idea for the book came about and how the two of you (Josh and Louis) worked on it together?

LB: I wrote the dissertation that was the "seed" for the whole project. Subsequently, I wrote the NEH (National Endowment for the Humanities) grant for the underlying oral history/archival research, and compiled the discography, filmography, and catalog of compositions.

Joshua and I both participated in the process of interviewing musicians and other personages, sometimes together, most of the time separately. Josh did the bulk of the interviews as well as the biographical writing. Elements of the original dissertation dealing with early performance style analysis made their way into the book. Joshua's expertise in musicology and compositional style analysis permeates the book.

Actually, without Joshua's collaboration and vision, a collaboration that was initiated by Lewis Porter at Rutgers University, the only scholarly work out there would be my dissertation. It was, at the time of its writing (1986) a major piece of work, but now 13 years later admittedly a thin one. In fact, the book far surpasses the dissertation, in content and accuracy of information, enough so that I will be contacting University Microfilms International and asking them to place the original dissertation on their restricted list (not for sale to the general public). In fact, not much of the original dissertation remains in the book, thankfully, since there are errors in it (errors that were not discovered until the book research shed light on them).

AAJ: Your book is not what I would call a "biography" in the traditional sense, rather it is a total educational experience and reference work about J.J. and his music. You refer to it in your preface as "the first ever comprehensive biography, filmography, catalogue of compositions, and discography of J.J. Johnson." Therefore, how would you describe your individual and collective goals or mission in writing this book? What are the main things you would like readers to get out of the book?

LB: Our collaborative goal (referring to the National Endowment for the Humanities grant narrative) was to document the life, music, and career of J.J. Johnson through oral history and archival research. This was accomplished with the support of the NEH through extensive interviews with family members, friends, fellow musicians, et al, and exhaustive research in a number of archives across the United States (see pages xxiii and xxiv in the front of the book).

As to your question, What should readers get out of the book? I would say: A much stronger sense of who J.J. is-the man, the composer, and the performing artist.

AAJ: What was J.J.'s role in producing the book? How and under what circumstances were interviews with J.J. conducted?

LB: J.J. didn't help "produce" the book, per se. As the subject of the biography, however, J.J. was a gracious interviewee (Joshua conducted a number of interviews in person and over the telephone) and provided numerous photographs that appear throughout the book.

AAJ: Which other persons were interviewed?

LB: I interviewed Joe Gourdin (who was the first interview of the oral history project, in New Orleans, and former saxophonist with the King Kolax Orchestra), Erma Levin (former Head Music Editor for Sony Motion Pictures/ Television, formerly Columbia Pictures), and Tommy Newsom (former Co-Director with Doc Severinsen of The Tonight Show Band). Several other interviews on my list were brief, including Benny Carter and Peter Matz (former music director of The Carol Burnett Show). There were others, as well.

AAJ: How did you go about compiling such a thorough discography, with the studio dates included? Any "advice learned the hard way" for discography compilers out there?

LB: The main body of the discography was compiled by me over a period of some thirteen years (1973-1986). After I graduated from Murray State University, in 1978, I began my graduate studies in performance at the University of Louisville. By that time, I had a fairly sizable LP collection of J.J. material that I augmented with taped materials from Jamey Aebersold's massive collection before I graduated.

In 1980, I began my doctoral studies at Ohio State University, and during my four years in Columbus, I added to my collection with LPs that I found at a number of record collectors' shows that would be held in town. When I began writing my dissertation (see the Bibliography of the book), my advisor, Dr. Burdette Green, suggested that I corroborate the information for as many recordings as possible. So, Ed Berger, of the the Institute of Jazz Studies, opened up its extensive record collection to me and served as an invaluable source of discographical data pertaining to J.J.'s tenure with the Benny Carter Orchestra. Tina Vinces (CBS Records), Bernadette Moore (RCA Records), and Sonny Carter (MCA Records) opened their respective archives to me. Producer Ed Michel (see pp. 191-192 of the book) forwarded copies of his engineering work notes to me for J.J.'s "Pinnacles" sessions for Fantasy Records.

With these archival data, along with data gleaned from materials given to me by David Baker (Indiana University), Bobby Bryan (formerly Jazz Producer of Murray State University Radio Station WKMS, now deceased), and Jamey Aebersold, I was able to compile the discography for the dissertation.

After Joshua and I began working on our NEH-funded oral history research for the book in 1991, I began to update the discography with new listings to reflect J.J.'s work since 1986, corrections to existing listings, and the addition of listings that were unknown to me at the time I compiled the original one. Fortunately, it remained a work in progress until the final edits were made to the camera-ready copy of the book, and as such, contains (as far as we know) J.J.'s music history on record, from his first with the Benny Carter Orchestra ("Love for Sale") to his last as a performing artist (the CD, "Heroes"). I can't say enough about a fellow discographer, Christopher Smith, who proofread the discography and provided me with quite a few additional listings and internet addresses where I could find more extensive session data. Without Chris's help (at his own expense, I might add), the discography would be incomplete.

Advice for discographers? Corroborate, corroborate, corroborate. Oftentimes, information contained in liner notes of older recordings and discographies, e.g., the Bruyninckx or the Jepsen volumes, is incorrect. And, that incorrect information gets repeated over and over each time an article, book, or research study is written, until it is no longer myth. God bless Dr. Burdette Green for insisting on corroboration of data; God bless Christopher Smith for reminding me with his frequent e-mails to corroborate data.