JJ Grey & Mofro, Jonny Lang and The North Mississippi Allstars at The Paramount 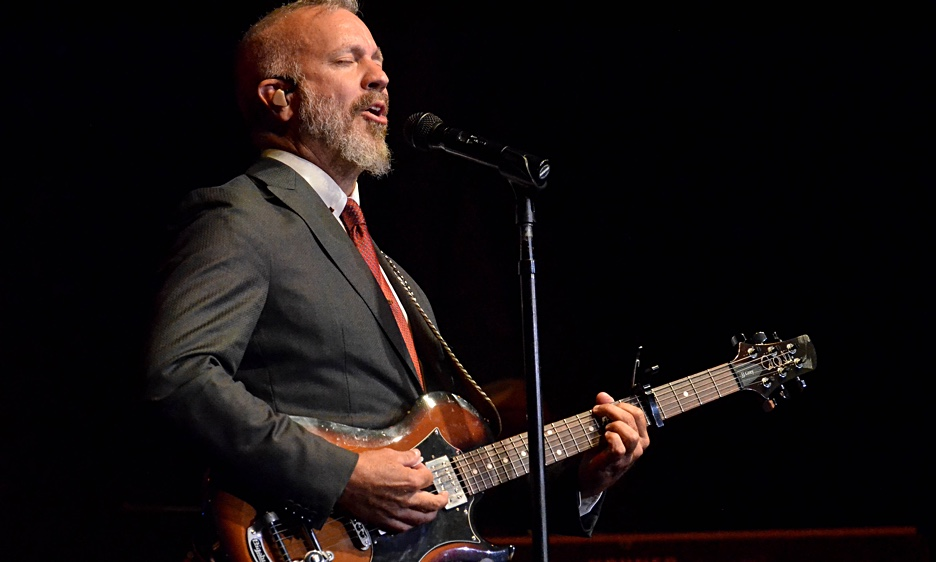 On a warm July evening, just prior to the summer's first "real" heat wave, JJ Grey & Mofro, Jonny Lang and the North Mississippi Allstars touched down in Huntington, NY for a triple-headlining performance at the Paramount. Though the venue was not sold-out, the three bands played full sets to a loud, fervent and appreciative crowd that was clearly into the performances. The audience members and fans, in the main portion of the arena, all had general admission tickets and moved as close to the stage as possible. They were rewarded by a three-pronged performance that had so much energy that it could have powered the venue's air conditioning system.

Each band has its roots in the blues. Their influences, however, are so much more than that. In addition to the blues, the terms roots rock, swamp, soul and Americana all can be considered appropriate descriptors to follow blues been used to describe the word "blues" and a hyphen. If one were to only describe the groups with these terms, it would not do them justice.

According to legend the name "Mofro" came about when vocalist and guitarist JJ Grey described the band's musical gumbo and sound. In addition, Grey has stated that the word was originated as a nickname he was given by a co-worker. Grey said he liked the southern sound of the word and as such adopted it as the band's name. Grey changed the group's name to JJ Grey & Mofro after his grandmother asked him if he was ashamed to use his own name. Hailing from Jacksonville, FL, the band's sound is a mixture of blues, funk, soul, jamband, southern rock, roots rock, gospel, pop, Americana and R&B. The seven-piece outfit brings the party atmosphere with it wherever it plays. Since 2001, the band has released seven studio CDs a greatest hits collection, The Choice Cuts (Alligator Records, 2009) and the live CD/DVD Brighter Days (Alligator Records, 2013). Its latest album is the 2015 Provogue Records release Ol' Glory.

Born Jon Gordon Langseth Jr. in 1981 in Fargo, ND, Jonny Lang, is a blues, gospel, and rock guitarist, singer and songwriter. At 15, Jonny Lang made a blues album, 1997's Lie to Me (A&M Records), which went platinum and hit No. 1 on Billboard's New Artist chart. At 17, he garnered his first Grammy nomination for Wander This World (A&M Records, 1998). During his career, he has released five albums that charted on the top 50 on the Billboard 200 albums chart and has won a Grammy Award for Best Rock or Rap Gospel Album for his 2006 album Turn Around (A&M Records). His latest CD is the 2017 A&M/Provogue Records release Signs.

The North Mississippi Allstars is a blues/southern rock band from the town of Hernando in the (where else) northern part of the state of Mississippi. The band was founded in 1996 by brothers, Luther Dickinson (guitar, lowebow, vocals) and Cody Dickinson (drums, keyboards, electric washboard, vocals). The group received Grammy nominations in the Best Contemporary Blues Album category for Shake Hands with Shorty (Tone Cool Records, 2000), 51 Phantom (Artemis Records, 2001) and Electric Blue Watermelon (ATO Records, 2005). The group won a Blues Music Award for Best New Artist Debut in 2001.

On this evening, the North Mississippi Allstars opened, Jonny Lang followed and JJ Grey & Mofro closed out the festivities. The three acts could have easily reversed order or performed any permutation and the audience members would have been happy. The evening's performances were all top-shelf and the fans in attendance got more than they had paid for—a show worthy of three headliners.

The North Mississippi Allstars' set was a vital, energetic and dynamic, if short, thirty minute performance that had the audience rocking, rolling and dancing to the beat. The band played with the reckless abandon and the joy that should embody all musical performances. The Dickenson brothers pulled out all the stops and delivered a seminar in southern blues and rock that left those in the audience who didn't know much about the group asking, "who were those guys?" and "where do I find their music; is it at the merch stand?"

After a short intermission, Jonny Lang and his band appeared on stage. Lang proceeded to preside over a master-class in blues guitar, opening his set with the one-two punch of "Don't Stop (For Anything)" and "Signs." Lang's ten song set was highlighted by and amazing bluesified version of Stevie Wonder's "Living For The City"—a performance that brought a hush across the crowd and a huge ovation when completed. Other highlights were "Red Light— Everything Is Going to Be Alright;" the cover of Tinsley Ellis' "A Quitter Never Wins;" "Rack 'E Up" and "Still Rainin.'"

Lang was a sight to behold with emotion and determination on his face while playing his acoustic guitar on the set-closing "Breakin' Me/Lie to Me." As with "Living For The City," one could hear a pin drop as he coaxed the music from his six string. When the song progressed, and the band joined in, Lang switched to his trusty electric guitar and played and sang the song as if his life depended upon reaching inside the soul of and touching each and every audience member. After another intermission, during which the roadies and crew set up JJ Grey & Mofro's considerable equipment (after all they are comprised of seven musicians), the stage darkened and with muted lighting and the group appeared.

Grey, wearing a gray suit with a bright red tie, was dressed somewhat like a preacher—if the ministry was the Electric Church of Blues, Soul, Funk and Gospel. He began his night playing harp and delivered a fantastic version of "How Junior Got His Head Put Out." Grey soon switched to guitar as he and the band proceeded to provide the audience with exactly what it came for, a lively set of favorites that included: the R&B-tinged, Otis Redding-styled "A Woman" from Country Ghetto (Alligator Records, 2007), Grey's homage to his home state, "Lochloosa" (featuring the fans singing along while the band played), "Jookhouse," "Orange Blossoms" and a bluesy, gospel, spiritualized version of "The Sun is Shining Down." The main set ended with "Brighter Days" originally released in 2001 on Blackwater. The performance and the evening ended with the rousing encore "Ol'Glory."

Grey's music has always had a quality to it that lightens the soul and makes the audience feel happy and rejuvenated. His stories and insights into the songs were homespun, folksy and engaging. Throughout the show, the band showed a great sense of camaraderie with each other and the audience. The solos were crisp, the vocals were soulful, the groove was funky and the performance was stellar. At the end of the encore, the band took its bows to a round of thunderous applause.

The three bands brought it to the Long Island crowd with energy, passion and inspiration that can only be created when the musicians have a pure love of music. On this evening that pure love was bestowed upon and transferred to the lucky audience members.