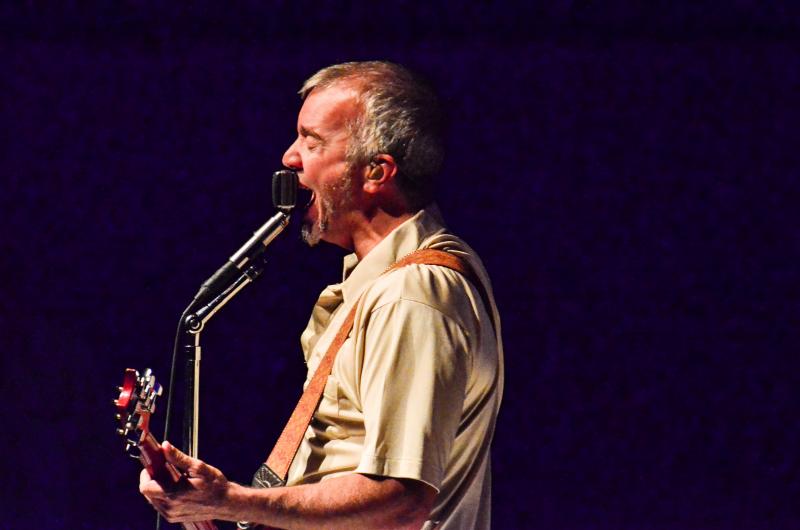 On a pleasant August evening, when the high temperatures between two separate, yet equally oppressive heat waves, had dropped and a pleasant breeze blew across Long Island, JJ Grey & Mofro, G. Love & Special Sauce and Big Head Todd teamed up for a triple headlining performance at the intimate NYCB Theatre at Westbury. Though the small arena was only partially-filled, the three bands played full sets bursting with strong performances that would have been at home in any huge stadium. The bands' fans, many of whom were able to move up and get close to the stage, were thrilled by the warm and cozy performance that could just have easily been a houseparty concert in someone's living room.

For the uninitiated, each of the three bands defies a simple description. The terms jamband, roots rock, soul, blues and Americana have all been used to describe the groups. These terms do not do them justice.

Big Head Todd & The Monsters, led by guitarist and singer Todd Park Mohr, are a blues, roots, rock band that was formed in Colorado in 1984. Since its first album, Another Mayberry (Big Records, 1989), the band has developed a large cult following and has continued to release well-received, critically acclaimed CDs, most notably the platinum certified (by the R.I.A.A.) Sister Sweetly (Giant Records/Warner Bros, 1993), Riviera (Big Records) and 100 Years of Robert Johnson (Big Records/ILG, 2011), the tribute to the late bluesman Robert Johnson featuring guest appearances by B.B. King, Hubert Sumlin, David "Honeyboy" Edwards and Charlie Musselwhite. The CD was credited to the Big Head Blues Club. In 2014, the band released Black Beehive on Shout! Factory Records.

G. Love & Special Sauce is an alternative, hip hop-infused, groove-based, Chicago-bluesy, rock, pop, R&B band that hails from Philadelphia, known for its unique sound that is at once contradictory and at the same time complimentary. Its music is calculated yet sloppy and energetic yet laid back. The three-piece is led by vocalist, guitarist and harmonica player G. Love, whose given name is Garrett Dutton and features The Houseman (aka Jeffrey Clemens) on drums and Jim (Jimi Jazz) Prescott on upright bass. Since 1994, G. Love, with and without Special Sauce, has released numerous albums beginning with its debut, the eponymously titled R.I.A.A. gold-certified G. Love & Special Sauce (Okeh/Epic Records, 1994). Coast To Coast Motel (Okeh/Epic Records, 1995), Long Way Down (Philadelphonic Records, 2009) and 2014's Sugar (Brushfire Records) have all garnered popular and critical attention.

JJ Grey and Mofro began its musical life as just Mofro. Plain and simple...Mofro. Legend has it that the name "Mofro" was coined by vocalist, guitarist JJ Grey as an explanation of the musical mélange created by the band. Grey has been quoted as saying that the word was derived from a nickname given to him by a co-worker and that he adopted it as the band's name because of its southern sound. He later changed the band name to JJ Grey & Mofro after his grandmother asked him if he was ashamed to use his own name. The Jacksonville, FL group's sound is an amalgamation of blues, jamband, southern rock, pop, R&B, soul and funk. The seven-piece (which includes guitarist Andrew Trube, bassist Todd Smallie, Dennis Marion on trumpet, Jeff Dazey on saxophone, drummer Anthony Cole and Anthony Farrell on keys and organ) outfit brings the party atmosphere with it wherever it plays. Since 2001, the band has released seven studio CDs including its debut album BlackwaterThis River (Alligator Records, 2013), the 2015 Provogue Records release Ol' Glory and a greatest hits collection, The Choice Cuts (Alligator Records, 2009). The live CD/DVD Brighter Days was released on Alligator Records in 2013.

On this evening, Big Head Todd & The Monsters opened, G Love & Special Sauce followed and JJ Grey & Mofro closed out the festivities. The three acts could have easily performed in any line-up or permutation and the audience members would not have cared. Though the numbers of audience members was a little more sparse than the bands (and the venue had hoped for), the performances were all top-notch and the fans in attendance got more than they had paid for.

Big Head Todd & The Monsters began the festivities with a dynamic version of the blues rockin' minor chord heavy "Rocksteady." The follow-up tune, "Fortune Teller," with all of its imagery, was propelled by piano-driven opening. Following the opening numbers, Mohr announced, "We are Big Head Todd & The Monsters from Colorado. We are so happy to be here in Westbury!" Mohr and the band (Rob Squires on bass, Jeremy Lawton on keys and pedal steel and Brian Nevin on drums) then ripped through a strong set that included the mid-tempo "Bittersweet," "Please Don't Tell Her," "Broken Hearted Savior," "It's Alright" (with its blue-eyed soul vibe and snippet of Marvin Gaye's "Sexual Healing") and a fantastic, set-ending, rocking, muscular cover of the Rolling Stones' "Bitch."

Early on in the set, Mohr addressed the crowd. He asked, "How's it going tonight. You're in for a great show...what's on your mind tonight? What do you want to hear?" It was at this point that someone from the back of the crowd yelled, "Crazy Mary!" Mohr smiled and responded, "Okay. This one's called Crazy Mary." The performance of the requested song from 1996's Beautiful World album was nothing short of stunning. In addition, the set included "Hey Delia," "Everything About You" (on which Mohr proved that his guitar playing is severely underrated) and the new song "Wipeout Turn."

The band's performance was truly eye-opening. It played its originals with a gusto and a fervor that younger band only hope to achieve. Its cover of the Rolling Stones' classic was both vital and energetic. In fact, the foursome made the song its own, rather than performing it by route. The band played with the reckless abandon and the joy that should embody all rock 'n' roll.

After a short intermission, G. Love & Special Sauce appeared on stage. G. Love, who was sitting center stage with an acoustic guitar propped on his lap, leaned forward and announced that the "first song is about coffee." During the performance of "Sugar," the title track from the group's most recent album, G. Love practically danced his way out of his chair while with his legs churning rhythmically to the beat. It was a site to behold because, all the while, he remaining glued to his folding chair. Flanked by Prescott on his right and Clemens to his left, G. Love introduced "Washing Dishes" with, "Because the only thing I'm good at besides playing guitar is washing dishes; that's why I wrote this song."

G. Love's lively set included his breakthrough single "Cold Beverage" (which on this evening featured a "Right Place, Wrong Time" introduction, songs from his lengthy catalogue ("Baby's Got Sauce," "Sweet Sugar Mama," "Booty Call" and "Come Up Man"), as well as covers of Bukka White ("Fixing To Die"), Donovan ("Season Of The Witch"—prior to which G. Love stated, "We're going to take you back to the old school now") and the Beatles (a funky Philadelphia-bluesified version of "Why Don't We Do it In The Road"). The set ended with G. Love jumping into the crowd and performing "Nothing Else Quite Like Home" from the seats and up the aisles as well as from his place centerstage.

After another intermission during which the roadies and crew set up JJ Grey& Mofro's considerable equipment (after all they are comprised of seven musicians), the stage darkened and with muted lighting provide mainly by small lamps set-up near each band member's station, the group appeared and opened with a jambandy, bluesy version of "Hide & Seek."

The band them delivered a lively set featuring both new material and old favorites that included Grey's homage to his home state, "Lochloosa" (featuring the fans singing along while the band played), the honky-tonking "99 Shades of Crazy" with its

lyrics, the R&B-tinged, Otis Redding-styled "A Woman" from Country Ghetto (Alligator Records, 2007), "Brighter Days" originally released in 2001 on Blackwater, and "Hold On Tight" from Ol' Glory. The performance and the evening ended with a bluesy, gospel, spiritualized version of "The Sun is Shining Down."

Throughout the show, the band showed a great sense of camaraderie with each other and the audience. Grey's stories and insights into the songs were homespun, folksy and engaging. The solos were crisp, the vocals were soulful, the groove was funky and the performance was stellar.

The band took its bows to a round of thunderous applause. Though the crowd was sparse, Mofro's performance was robust. Each and every song was infused with the uplifting raw emotion and passion that only those with a pure love of music can have and hold.

As the crowd filed out of the seating area and into the venue's lobby, there was a commotion near the doors. Each of the bands had merchandise booths/tables set-up near the exits. T-shirts, CDs, posters, LPs, caps and memorabilia were all being offered for sale, and judging by the number of fans clamoring about the area, numerous transactions were being made. As they left, audience members were seen exiting with their pre-signed posters, questioning venue personnel about whether the band members would be coming out, pulling their new concert T's over their heads and singing the lyrics to their favorite songs.