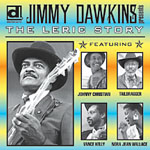 The term "stalwart" wasn't invented for Jimmy Dawkins, but as far as the Chicago blues scene is concerned that's just what he is. His stinging, succinct guitar has graced too many sessions to mention, while back in the 1980s he owned the label that's compiled on this title.

Now the 1980s wasn't a decade that was kind to the blues anymore than it was to a number of other musical forms, but with that proviso in mind, this retrospective still has its merits. Norah Jean's "Oh My Love" isn't one of them, however. In the hands of someone like Irma Thomas, the clichéd lyric might have come across as so much more. Jean's performance strives for sweet soul heaven, but ends up some distance from it.

Tail Dragger's performance of Dawkins' "So Ezee" is, however, an antidote. The band is trenchant yet deft in its execution, and there's a measure of Howlin' Wolf's grit in Dragger's voice, allied with a character that's entirely the man's own. He gets further down-home on "My Head Is Bald," and the band nails the groove immovably.

Dawkins's guitar on Queen Sylvia's "I Know I Ain't Number One" makes for strong contrast with her tremulous voice. To some ears her delivery might sound a little eccentric, but its effective enough and the way she rides the groove is entirely her own, as she proves on what was presumably the B-side of the single, "Too Bad Baby." Dawkins is on hand on this one, too, reinforcing the impression that his association with the singer was a highly productive one that, in a better world, would have seen more light of day on record.

Big Mojo Elem's "Special Kind Of Love" personifies the indomitability of the human spirit, but with an odd little organ part worked in. Dawkins is on hand again, turning in a solo that's a model of economy and grit, with the performance far greater than the sum of the parts.

Little Johnny Christian turns in four performances, the best of which is "Ain't Gonna Worry About Tomorrow," where his vocal is a mixture of honey and grit as he puts over a message about life's little injustices.

Sister Margo and Healing Center Choir veer on the smooth side of gospel, and remain rooted in this world; their performances come over as flat for all of their unquestionable fervor, closing out a compilation that's surprisingly more good than bad.

New Life; Luv Somebody; So Ezee; My Head Is Bald; I Know I Ain't Number One; Too Bad Baby; Use What You Got; The Jam; Why You Hurt Me So Bad; Untrue Love; Oh My Love; Special Love; Ain't Gonna Worry About Tomorrow; I Gotta Sad Feeling; My God Is Real.