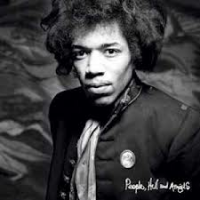 The eye-catching metallic tone of the packaging, not to mention the scrupulous annotation in the accompanying booklet, belie the seemingly motley collection of twelve tracks comprising Jim Hendrix's cryptically-titled People Hell and Angels.

Nevertheless, this slightly less-than hour of music documents the period in which the iconic musician, in an earnest attempt to progress beyond The Jimi Hendrix Experience, proceeded from the adventurous Electric Ladyland (Reprise, 1968) into more stylistically diverse territory during 1969 and the early part of 1970.

It's particularly noteworthy too that, by the inclusion of previously-released tracks in slightly different form(s), such as the final take of "Somewhere," featuring Stephen Stills on bass, this archive release attempts to render obsolete the misconceived collections first issued in the wake of the Hendrix' untimely death.

Perhaps most significantly, the Band of Gypsys lineup consisting of Hendrix, bassist Billy Cox and drummer Buddy Miles appears on four cuts here (though noticeably and mysteriously missing the single version of "Izabella" referenced in biographer John McDermott's essay). The reappearance of songs such as "Earth Blues," already available in various forms over the years, will no doubt cause some consternation among the Hendrix cognoscenti, but the sterling sound quality of the track, its audio overseen as usual with these releases by original engineer Eddie Kramer, reaffirms the legitimacy of its inclusion here.

Jimi Hendrix loved to sculpt in the recording studio, but he also relished sharing the spontaneity of the moment with other like-minded musicians. This openness to serendipity led to interactions here in the form of his furious r&b styled jamming on "Let Me Move You," with long-time acquaintance Lonnie Youngblood on sax and vocals, plus Hendrix' contribution to "Mojo Man," the work of other long-standing acquaintances of his, Albert & Arthur Allen, aka The Ghetto Fighters; both tracks suggest his charitable approach to making music could function as a conduit to his increasingly eclectic vision.

Meanwhile, the blues as the foundation of Hendrix's groundbreaking style remains in the form of Elmore James' "Bleeding Heart" and "Hear My Train A 'Comin.'" The latter track became increasingly personal to Hendrix over the later years of his career and here it segues smoothly into the similarly styled cover of the former, both of which studio renditions solidified arrangements performed in concert. In a wholly different vein, a mere snippet of the reflective "Villanova Junction Blues," premiered in public at the Woodstock Festival in 1969, appears here featuring the lineup that performed at the historic festival as well as on latter day Hendrix compositions, such as "Easy Blues."

A less structured composition to begin with, this arrangement features a prominent rhythm pattern supplied by guitarist Larry Lee as well as the always distinctive playing of drummer Mitch Mitchell. Like its counterpart "Crash Landing," this latter tune has been stripped of overdubs down to its essential instrumentation. "Hey Gypsy Boy" may sounds familiar, as it would eventually evolve into "Hey Baby (New Rising Sun)" and, likewise, "Inside Out" would eventually take formal shape as the tune "Ezy Ryder."

If the reappearance of such numbers seems redundant at this point in the decades- long exhumation of the Jimi Hendrix recording vault, their inclusion on People Hell and Angels reaffirms the perception that, as prolific as Jimi Hendrix was, he rarely lost track of a worthy idea.