Jimi Hendrix: Band of Gypsys Live at the Fillmore East 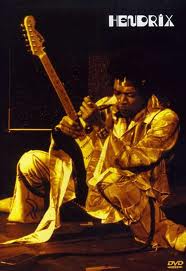 Band of Gypsys Live at the Fillmore East

Given the latter years of guitarist Jimi Hendrix's life were fouled by business disputes, it comes as no surprise that the Band of Gypsys, perhaps the foulest such entanglement of them all, was not comprehensively recorded in video or audio.

While we're fortunate to have the black & white footage contained on this DVD— paired with a feature length documentary comprised of interviews with the principals as well as those in the know—this presentation only whets the appetite for more. Not just in terms of content, but packaging too: because bootlegs abound of all four Gypsys' shows (and no doubt original Hendrix engineer Eddie Kramer could work digital wonders with them), more audio and a more comprehensive inclusion of photos and text on this Hendrix group would make for a truly deluxe edition. Their absence only dredges up the issue surrounding the root of the project: concession in a lawsuit from early in Hendrix's career.

That said, what is here—black & white video of the complete January 1,1970 gig, the first show of two—remains compelling watching and listening, though the contrast is jarring between the primitive camera work and Kramer's remix for this release. As much as Hendrix's psychedelic persona seemed to explode in full form with Are You Experienced (Reprise, 1967) so does this music, an earthier and more compact fusion of rock, funk and r&b/soul, sound carefully conceived and honed to its essence.

In the course of eight songs, including "Machine Gun," an audio piece de resistance, the threesome covers a prodigious amount of ground, illustrating along the way how bassist Billy Cox's steady approach was an ideal foil for Hendrix's wild machinations: hear the instrumental portion of "Foxy Lady." And drummer Buddy Miles' willingness to take the spotlight (on more than his firm fatback) corresponded to Hendrix's greater desire to collaborate. And it's more than a little noteworthy that the group couples contemporary soul songwriter Jerry Ragavoy's "Stop" to a rough instrumental outline of "Earth Blues"—a precursor to the next phase in Hendrix's recordings, represented in First Rays the New Rising Sun (MCA, 1997), from which the Band of Gypsys at the time seemed like nothing more than a temporary digression

Produced by Neil Aspinall and Bob Smeaton, the documentary has been available on video since 1999, and deservedly winning awards. A largely dispassionate explication of the circumstances swirling around Hendrix at the time— including varying degrees of business, social and artistic demands—the documentary tells a compelling story by interweaving interviews with Miles and Cox, displaced (but not resentful) drummer Mitch Mitchell, plus Soul Train producer Don Cornelius, the principals in the Ghetto Fighters, and assorted figures in the various scenarios the time including lawyers and associates (not to mention more performance footage and, pehaps most entertainingly, monologues from Eddie Kramer). The plot and subplots, plus major and minor characters, might beg credibility if presented in a fictional context; but here, though many of the perspectives clash at least slightly, the events take on an understandable logic even if you are not familiar with Hendrix's life and times.

In fact, notwithstanding its shortcomings, the DVD ultimately illuminates this phase of Hendrix's career in proportion to its time span. It's a measure of his genius that, like the greatest artists of any era, his life accurately reflected the times in which he lived. One can only hope that, as time passes, and the influence of this music continues to resonate, that subsequent packages of this material will expand accordingly.