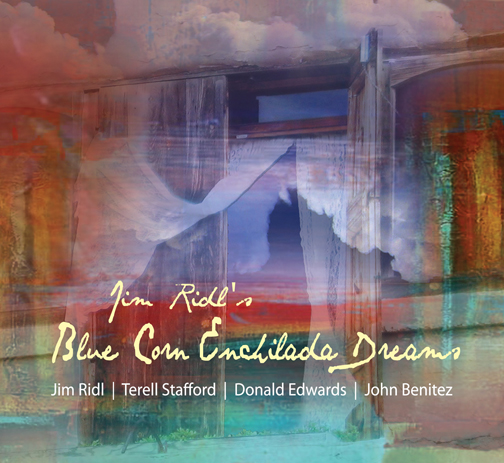 Jim Ridl is one of our most creative and versatile jazz pianists, an acknowledged master often called upon by his peers for their recordings and live performances. Whether he works along with saxophonists Dave Liebman and Charles Pillow, or flugelhornist Anthony Branker, or vocalist JD Walter, or in a duet context with guitarist Pat Martino, Ridl always adds something special to the mix, conjuring up ideas and images from some inexhaustible think tank within. At the same time, he blends seamlessly with the music and the group.

Moreover, under his own leadership, Ridl is creating a legacy of outstanding recordings, beginning with Five Minutes to Madness and Joy (Synergy Records, 1999) on up to his current release, Blue Corn Enchilada Dreams. This most recent endeavor was inspired by visits to New Mexico with his wife, Kathy, herself a talented musician and graphic artist (her CD covers for Dreambox Media and other labels have achieved iconic status). The album reflects Ridl's abiding interest in times and places on the American scene. Thus, Madness and Joy took off from the poetry of Walt Whitman. A Door in a Field (Dreambox Media, 2003) was based on his experiences growing up on a farm in North Dakota. Your Cheatin' Heart and Other Works (Dreambox Media, 2005) evokes Hank Williams and the country and western scene. Yet, while reflecting multiple historical, geographical and musical influences, Ridl's compositions and recordings are all quintessentially in the jazz idiom with a liberal helping of blues, bebop and post-bop influences.

In this album, with the great Terell Stafford on trumpet, and a refined and responsive rhythm section consisting of John Benitez on acoustic and electric bass and Donald Edwards on drums, and with Ridl on acoustic piano and two electronic keyboards, he provides his own compositions to conjure up images of the American Southwest, with its rich colors, stark landscapes and combined heartland, Hispanic and Native American cultures. In the album notes, Ridl provides short poems self-authored in English, and with Spanish translations, to accompany each track. We are invited into a world of dream-like images which Ridl as composer evokes though musical motifs that allude to Bach, Stravinsky and Bartok as well as trumpeter Miles Davis' collaborations with arranger Gil Evans, Bill Evans' piano stylings, African American hymnals and Latin American salsa and mambo twists.

Yet it all comes together consistently. The diverse sounds weave seamlessly between standard melodic and harmonic lines and modern dissonances that, however, are never intrusive. The deceptive simplicity of Ridl's melodies gives ample room for creativity and improvisation. Whether heard as a series of thematic tone poems, or simply in terms of its musical and improvisational values, the effect is pleasing and stimulating to the ear, with gentle spiritual urgings for those inclined to hear them.

The first track, "Chilis Rule," begins with a syncopated march stated by Ridl and breaks out into a lively swinging trumpet solo by Stafford. Then a grooving acoustic piano solo by Ridl leads back to the march theme. "I Taste in Color," offers a slow and persistent exploration of flavors beginning with a brief piano statement that leads up to a scalar melody by Stafford. A lumbering bass line then accompanies Stafford on a series of solo improvisations around the simple melody, with some synthesized sounds popping up in the background such as might be heard in a desert or prairie. Stafford builds the intensity with the help of Edwards' strong percussive thrusts. Then Ridl is back supported by Benitez's deep register electric bass line. There's a touch of single note play by Ridl, with a slight dissonance peppering the flavor, and the group takes the piece out with a chromatic aftertaste.

"The Wind Gleans" is perhaps suggestive of the Navaho or Mescalero Apache mystics. Ridl opens the track with synthesizer and electric piano sounds, with the electric bass doing its own line for good measure. Subsequently, there is a Bach-like melodic line, and Ridl then uses a higher register of the keyboard to evoke a bell- or chime-like quality with synthesized strings providing a soft background texture. Some baroque counterpoint leads up to Stafford's muted and thoughtfully lyrical trumpet phrasing that is reminiscent of Miles Davis' solos on Sketches of Spain (Columbia, 1960).

"Scoria Hair" alludes to a fantasy female figurine made of earthen substances and suggests a "Rite of Spring," to which Ridl alludes by using the famous Stravinsky chord of E7 over Eb7 from that groundbreaking masterpiece (lauded by jazz players like saxophonist Charlie Parker). While evoking a feeling of an early spring awakening, there are suggestions of the Bill Evans trio with bassist Scott LaFaro and drummer Paul Motian, and then Stafford's open but slightly squeezed flugelhorn statement of the melody evokes Miles once again. There is some fine acoustic bass work by John Benitez on this track. Thoroughout, Ridl toys with the Stravinsky dissonance, out of which Stafford makes good mileage.

"Why Wait for the Saints?" begins with a hymnal melody stated by the trumpet, with Ridl's Privia-generated church organ in the background. The motif double-times into a "Salvation Army" march. A mildly disquieting chant-trance ensues, suggestive of the so-called "ring-shout" of the sort that pianist Thelonious Monk witnessed as a youth performing with a church evangelist. This twist gets funky with bitonality and simultaneous time signatures and the use of synthesized strings.

"Blue Tortilla Waltz" uses a laconic three-quarter time pace within which is sandwiched a Tex-Mex melody by Stafford. Edwards perks up the ending with some light percussive work with the sticks and tom-toms. "Tone Tree" (it is left to the listener to determine what the title represents) is a lively number that combines blues and Latin flavors. Eventually, Stafford breaks out into a salsa-like solo which evolves in rhythmic intensity. Throughout the recording, Ridl gives Stafford ample room to do his thing, and he comes through admirably.

"God is a Canopy" is a cleverly crafted piano solo in which Ridl uses a 12-tone melodic line in canon form, adding some hints of jazz rhythm-a-ning along the way. "First Rose" was first featured in the CD Jim Ridl Live (Dreambox Media, 2001). "Canopy" is constructed on a theme vaguely resembling Bach but soon gets into modern dissonance and a bit of fugal counterpoint. The soft impressionist quality of this piece suggests that it may have been inspired by Ridl's work with reed player Charles Pillow on the latter's Van Gogh Letters (ELCM Records, 2010.)

The gastronomical connotation of the album title Blue Corn Enchilada Dreams reveals the Southwestern flavorings of this album, but it masks the complexity and depth of the music that Ridl and his colleagues build from basic ideas that are put together in a postmodern mix. Nat Hentoff held that jazz is at its best when it "tells a story." This CD tells a story within a dream within the spirit of a place and time remembered.

Tracks: Chilis Rule; I Taste in Color; The Wind Gleans; Scoria Hair; Why Wait for the Saints?; Blue Tortilla Waltz; Tone Tree; God is a Canopy.