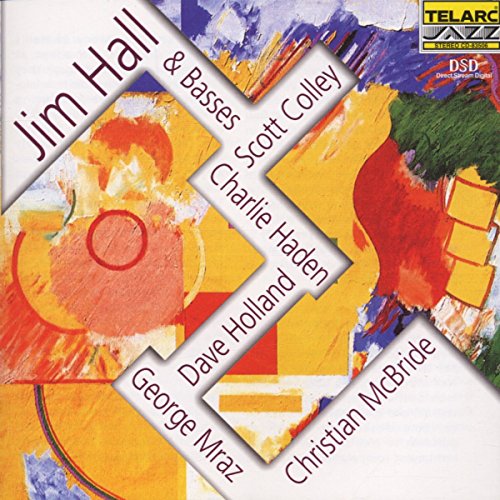 A bit leery of concept records, I wondered what some of my best friends would think of Jim Hall’s latest record, Jim Hall & Basses. Given Hall’s musical philosophy of treating the bass as if it were a fellow guitar, these duets and trio tracks sustain interest throughout.

Jim Hall, in his fifth decade of jazz, began with Chico Hamilton and Jimmy Guiffre in the 1950s. He later was an integral part of Sonny Rollins' comeback and the bands of Paul Desmond, Bill Evans, and Stan Getz. Today he is recognized as a true master of jazz guitar and everyone from Pat Methany to John Scofield copies his sound.

Jim Hall & Basses is a joyous album of playing. Hall seems comfortable in every setting. He works here with his regular touring band mate Scott Colley. An A-list bassist, Colley and Hall can be heard on 5 of the tracks here. Hall composes insider and outsider music, coupling standards with four “Abstract” compositions. Colley handles both well, never really straying from cohesive statements.

Favorite tracks here are by the veterans George Mraz and Dave Holland. Mraz begins some flavored bowing on the quirky “Tango Loco” then dances with Hall walking his bass into the sunset. Together Hall and Mraz also re-ignite “All The Things You Are” as a waltz. Holland trades the lead with Hall on the opening track and on the blues “Sam Jones.” One marvels how these two can make so much music from such few notes. Their ability to swing is the highlight here.

Charlie Haden sits in on two tracks with that big broad Haden tone that is instantly recognizable. Less formidable is the bass of Christian McBride. Several times you could swear he was borrowing licks from Ron Carter. McBride, perhaps a better leader than support bassist these days, takes the melody on the waltz “Dog Walk” down the street and swaggers back.

This intimate recording, although a concept project, rises beyond expectations.