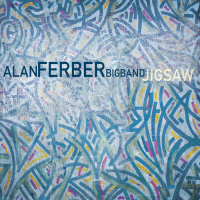 The Jigsaw mapped out by trombonist Alan Ferber's splendid New York City-based ensemble comprises a number of dissimilar pieces, drawn from a broad range of musical patterns, which makes its assemblage arduous yet ultimately rewarding. Ferber's sophisticated arrangements manifest a pensive, and at times ethereal, temper that is far removed from the realm of flag-wavers and barn-burners on which big bands once relied as their raison d'etre.

That's not to say that there aren't times when Ferber and his colleagues unleash the sort of rhythm and power that have long been the hallmark of big-band weaponry. Listen, for example, to Paul McCandless' "Lost in the Hours," which swings with a vengeance behind crisp solos by trombonist John Fedchock and soprano saxophonist Rob Wilkerson, as does the album's take-no-prisoners finale, trumpeter Clay Jenkins' "Late Bloomer," which scurries to the finish line on the wings of high-powered statements by Jenkins, Ferber, tenor Jason Rigby and drummer Mark Ferber.

These are, however, exclamation points on a session that opens far more sedately with Alan Ferber's "Impulso," guitarist Anthony Wilson's "She Won't Look Back," the leader's "Jigsaw," sensuous "North Rampart" and bone-heavy "Get Sassy" (whose plain-spoken cadences may echo its New Orleans heritage but belie its promise of brashness, leading instead to detachment and dissonance). On the other hand, even though the fireworks are scarce before "Hours" and "Bloomer" elbow their way onto the scene, Ferber's charts are invariably well-drawn and engaging, as are the solos by alto John O'Gallagher and trumpeter Alex Norris ("Impulso"), Wilson, Wilkerson, bassist Matt Pavolka, trombonist Jacob Garchik and tenor John Ellis ("She Won't Look Back"), O'Gallagher and drummer Mark Ferber ("Jigsaw"), Wilson and Ellis ("North Rampart"), Garchik, Wilson, Alan Ferber and the horn section ("Get Sassy").

Those who favor their big-band comestibles served with discernment and depth should warm immediately to Jigsaw, on which Alan Ferber earns high marks as composer, arranger, sideman and leader.

Impulso; She Won’t Look Back; Jigsaw; North Rampart; Get Sassy; Lost in the Hours; Late Bloomer.