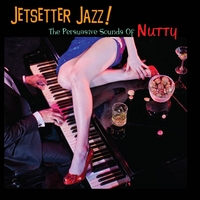 The outsourcing of cover material in jazz has become relatively common practice. The vast Great American Songbook, with diversity ranging from popular standards to show tunes and beyond, has provided a goldmine for improvisation, as has gospel, blues and soul music. So the question arises: what about rock? Why hasn't this genre contributed more to the jazz repertoire? Is it that many jazz musicians don't want to admit that they came up—as many have—listening to rock, and still have an affinity for it?

If, for a moment, Frank Sinatra could be imagined showing up at the Fillmore with premier Vegas musicians and tripping out onstage, then that would be Nutty's Jetsetter Jazz, whose act is total retro lounge, but with a twist. These cats have taken on the task of not only covering classic rock, but they take it one step further by blending it with jazz standards and television themes.

The record opens with the unmistakable sound of a stylus dropping on vinyl, going into Jimi Hendrix's "Purple Haze" meets Henry Mancini's "Pink Panther" theme. As with all the songs, it is a cunning approach with immediate appeal. First of all, these musicians are all veterans of the soundtrack studios in Los Angeles, and have impressive expertise in reading and arranging complex charts. Led by crooner Sonny Moon, the songs are as varied as they are familiar. The Kinks is teamed up with bassist Charles Mingus on "Tired of Strollin,'" while Jethro Tull is fused with the theme from Mission Impossible on "The Impossible Past." There are the Latin-powered "Manteca in a Bottle," where The Police join trumpeter Dizzy Gillespie, and a two-song Van Halen concoction "Rumba with the Devil." Singer/songwriter Neil Young is mixed with pianist Duke Ellington on "Cinnamon Doll," and The Moody Blues with pianist Dave Brubeck on "Five Nights." These are some of the highlight numbers, but the whole record is quite an amalgamation experience from beginning to end.

Besides being a blast to hear, Jetsetter Jazz raises another question: why hasn't this been done before? There is a whole generation out there which grew up with this music, and it serves the purpose of introducing jazz to a broader rock audience. With its impeccable credentials and showmanship, Nutty is doing just that with its terrific live performances, where the group once again proves it is for real, and is having a gas doing it.