By DAN MCCLENAGHAN
April 15, 2011
Sign in to view read count 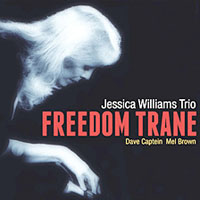 Jessica Williams, one of our top jazz pianists, has evolved since she tossed the record company expectations and jazz games out the window into the thorny rose bushes, and sought out her own way, and found it, via the establishment of her own record label, Blue & Red Records, and with the work she has done for Seattle's Origin Records. Songs for a New Century (Origin Records, 2008), and her tribute discs exploring the works of pianists Thelonious Monk, Deep Monk (Blue & Red Records, 2008), and Art Tatum, Tatum's Ultimatum (Red and Blue Records, 2008), signaled the incoming tide of change, her shift into a different dimension.

Back in the homage mode, Freedom Trane is Williams' reverent nod to the saxophonist John Coltrane. All of the previously mentioned recordings were solo outings, but the pianist gets back to trio format here, a territory she has explored in her own inimitable way, but never so well as she does with bassist Dave Captein and drummer Mel Brown, her most simpatico trio-mates since her work with bassist Ray Drummond and drummer Victor Lewis on Live at Yoshi's, Volume 1 (MaxJazz, 2004) and Volume 2 (MaxJazz, 2005).

Coltrane was a spiritual seeker. That was obvious with his contribution to trumpeter Miles Davis' Kind of Blue (Columbia Records, 1959), but much more so during his 1960s Impulse! label years. He was looking for God with his saxophone, and if he didn't find It, he came awfully close. Williams captures the essence of his spiritual quest and—with her enormous technical proficiency married to a flexible devil-may-care spontaneity, and an unmatched ability to get inside another artist's sound to push it forward with her own musical world view—has created the finest of Coltrane tributes.

Mixing Coltrane originals with her own compositions, Williams opens with her original, "The Seeker." A thunder rumble of drums leads into a majestically swirling sea of piano notes that flows into a current of forward momentum reminiscent of a Coltrane's classic Impulse! rhythm section, the pianist McCoy Tyner, drummer Elvin Jones and bassist Jimmy Garrison trinity, with Williams displaying a warp-speed, lighter-than-air right hand that floats delicate notes over a dense hard gravity attack of her left hand.

"Lonnie's Lament," is from the saxophonist's Crescent (Impulse!, 1964), one of his rather underrated albums, due in part because it came the same year as his masterpiece, A Love Supreme (Impulse!). It is a timeless sound, from Coltrane's classic quartet or from Williams' hands, as it becomes increasingly obvious that nobody out there can capture the very soul the iconic saxophonist as well as she.

The Williams-penned title tune is the set's high-heat cooker, and is the "jazziest" tune here, while "Paul's Pal," co-written by Coltrane and fellow saxophonist Sonny Rollins, struts along with its hat cocked at a rakish angle, a wry grin on its face.

Williams' "Prayer and Meditation" serves as a centerpiece to the CD, as it delves deeply into mid-1960s Coltrane spirituality as a Williams/Coltrane marriage of pensive, unadulterated beauty, before the pianist joins hands with "Naima," from Coltrane's breakout album, Giant Steps (Atlantic Records, 1960).

Williams ends the evening with Coltrane's impossibly gorgeous "Welcome," a solemn, holy, gentle, lush sound, like so much of what the pianist has been creating since she found her true voice.