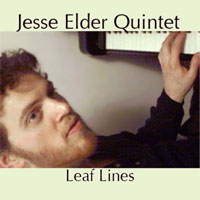 Jesse Elder is a 21-year-old composer, pianist, and bandleader with a bright future. Throughout a self-produced CD recorded in March of 2005, Elder's musicianship and organizational skills evince maturity and wisdom well beyond his years. The antithesis of a blowing session, the recording is a showcase for 10 of Elder's compositions, all of which are enjoyable and challenging. His pieces have little or no relation to popular song forms, and are often asymmetrical in structure. Elder favors odd meters and frequently shuns a steady pulse. Individual themes sometimes stand pat, develop in unexpected ways, or disappear altogether. Regardless of how different in character the sections are they always coalesce. Most importantly, amidst all of this seeming irregularity, Elder has a gift for writing catchy and substantial melodies.

A little more than two minutes in length, "Beams & Arches, the disc's opening track, excludes solos except for a brief wispy break by drummer Thomas Crane. Bouncing between Elder's piano and the two horns (Colin Killalea's tenor saxophone and the trumpet of Tatum Greenblatt), the melodies are bright and cheerful, standing out from a tricky rhythmic underpinning. As he develops the line, it loses some of the initial playful feeling and becomes more insistent. "A Nice Brew is a brooding mixture of textures and studied movement. The melody (a memorable one) is divided between Killalea and Greenblatt. At times the music almost comes to a complete standstill; in other instances, a faint pulse can be discerned. Solos by Killalea and Elder are immersed in the music's limp, uncertain temperament, and the pianist dares to play a rich, darting accompaniment behind the tenor.

The austere "Quaker Soul is mostly comprised of a long drawn out melody sequence played by the horns. The piece avoids becoming too serious due to a piano introduction that is both graceful and knotty, and later reappears as a jaunty waltz. "Puddle Jumping features an obstinately swinging theme that's a bit claustrophobic, continually plowing forward, pressing one phrase into another. In contrast to the density of the composition, Elder's 2-chorus solo leaves a lot of open space, allowing individual passages to sink in. Leaning on Matthew Brewer's walking bass line (virtually the only one on the recording) and Crane's skeletal drumming, even when his lines begin or break off in odd places (shades of Thelonious Monk and Andrew Hill) there's a continuum and sense of order in everything Elder plays.

Built around a brassy phrase that lumbers along in an uneven gait, "Red Paint is another one of Elder's compositions that sounds complete despite its brevity. During succinct tenor and trumpet solos, the band plays a couple of throbbing riffs, then simply goes mute and lets the soloists continue on their own. Although in some respects "Leaf Lines is the most conventional track on the recording, it nonetheless contains some of Elder's idiosyncratic touches. The composition boasts a lovely, songful melody that gradually leads to a stormy interlude. Twenty-six bar solos by Killalea and Greenblatt over Crane's unobtrusive backbeat seem longer because of the deliberate tempo.

Perhaps the most ambitious work of the set, "Like A Deer skillfully integrates three stanzas from e.e. cummings's poem, "All in green my love went riding, into flashing hard-bop influenced themes and a busy, variable foundation. The flat, calm sound of Lindsey Stormo's unaccompanied voice is an ideal vehicle for cummings's haunting images of the deer and the intimation of death. Each of the three-line stanzas briefly halts the music's march, and partitions extended solos by Killalea and Greenblatt.