By JAMES NADAL
December 8, 2015
Sign in to view read count 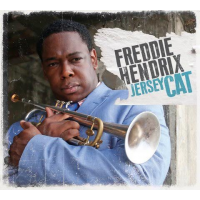 Though the state of New Jersey has been the birthplace and residence of luminous jazz musicians, it has never garnered a reputation for being a jazz haven, arguably due to its proximity to New York City, where the action has always been. Trumpeter Freddie Hendrix is on a mission to change all that with Jersey Cat, a labor of love spotlighting the talent in his native state.

Assembling a distinguished roster of locals anchored by drummer Cecil Brooks III—who is in charge of production duties—the other Jersey residents are sax players Bruce Williams and Abraham Burton, and pianist Brandon McCune, while bassist Corcoran Holt and trombonist David Gibson were brought in from New York City. With such a solid lineup it was a matter of coming up with the right compositions, and letting the sessions commence.

They come out of the gate with "St. Peter's Walk," a straight ahead burner with Hendrix paying homage to Woody Shaw, who originally played the song on a Louis Hayes date. A brisk pace is maintained while everyone gets a chance to shine, but it is noticeable from the start that this is a trumpeter's record. The standard ballad "You Don't Know What Love Is," is performed without the saxophones and trombone, in a relaxed quartet setting, Hendrix playing unhurried and tranquil.

"The Journey Man," an original composition, displays powerful horn arrangements, and Hendrix's talent for tempo drama and effect. "Jersey Cat," the centerpiece title track, is subdued, with intensifying passages, but maintains a moderated cadence. Then it's back to the bop with "On The Rise," where pianist Brandon McCune lays down some serious comping for the horns to stretch out. They bring it down with "Madeira Nights," a romantic laced ballad, before picking it up again with a modern approach to Freddie Hubbard's "Hubtones."

"Invitation," is a standard which allows a lush arrangement complete with ample improvisations, here maximized to its fullest potential. Hendrix penned "Whims Of A Waltz," as a buoyant piece, which appears to glide through its time signature. "Peace," by Horace Silver, brings closure to the repertoire, and again is played in a quartet format, offering just what the title implies.

Freddie Hendrix has been on a steadfast musical course over the past few years. He has performed as notable sideman on a number of recording sessions, including with fellow Jersey player Rufus Reid, and has been a member of the Count Basie Orchestra. He has appeared on tour with Alicia Keys, and on high profile concerts with Aretha Franklin and with the Jazz at Lincoln Center Orchestra directed by Wynton Marsalis. Jersey Cat is a vital testament that he has the composing, arranging, and leadership skills combined with incredible technical chops, to succeed as a major artist in the jazz realm.