By DAN MCCLENAGHAN
July 3, 2004
Sign in to view read count 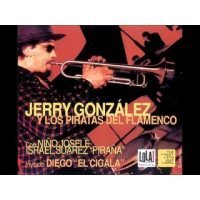 Says Gonzalez: "In flamenco, their thing is accoustic and simple; you don't want to put too much in there."

He followed that plan, keeping it simple and accoutic, mixing in his trumpet with the flamenco guitar, cajon (a box-like percussion instrument), and vocals, creating a beautifully spare and remarkably organic sound.

Simple: Most of the tracks are just trumpet (mostly muted, Miles Davis-like: Sketches of Spain minus the Gil Evans orchestrations, comes to mind at times here), cajon and/or conga, and flamenco guitar, and throw in the Indian tablas on "Pirata De Lucia." So it's mostly human flesh on stretched skin or wood, plus the vibration of a lower lip channeled through the loops of the brass horn, and fingers on strings. Simple, organic, steeped in the Spanish flamenco tradition, stirred (but not blended) with New World jazz sounds that originated with African rhythms. The result is captivating.

Along with the traditional song "Hubo Un Lugar" and his own compositions, Gonzalez morphed Thelonious Monk's "Monk's Dream" into "Monk's Soniquete" and Charlie Parker's "Donna Lee" into "Donnali," with almost surreal—but oddly beautiful—results.

This set is perfection, an unwaveringly focused vision that produced music that sounds inevitable, in spite of the seemingly disparate elements involved. One of the appeals is the "you can't do that" factor; you can't put congas or trumpet or tablas into a flamenco mix, or make gypsies out of Monk or Yardbird. But apparently you can—or Jerry Gonzalez can; and he comes out of the project sounding like a genius.

Pen this one in—with indelible ink—on the top ten of year list.