Since '77 pianist/composer Jeremy Monteiro has helped to place Singapore on the map through his role as a jazz ambassador. To celebrate his fiftieth birthday Monteiro assembled his seventeen-piece big band joined by a number of special guests and led a swinging performance in front of a packed ballroom at the Ritz Carlton Hotel. The lavish event was part of the ongoing fund-raising efforts of Community Chest which supports 72 charities throughout Singapore. Specifically, Community Chest supports critical social service programmes which help children with special needs, people with disabilities, disadvantaged elderly and families facing difficulties. In all, the essential funding which Community Chest raises benefits 320,000 people in the community and helps them live more independent and dignified lives. The Singapore business community turned out in numbers to support the event and the evening was marked by the presence of His Excellency S.R. Nathan, President of the Republic of Singapore. 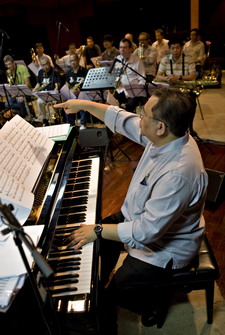 Beginning with "Blues for the Saxophone Club," one of six compositions arranged by Tom Kubis, Monteiro's nostalgic piano intro paved the way for the full ensemble to roar in. The rhythm section of drummer Tama Goh, bassist Brian Benson, guitarist Andrew Lim and percussionist Mohamed Noor did a splendid job throughout the evening with their tight support work and rhythmic intensity, and Noor brought lovely Latin, Afro-Caribbean and Indian colors to the arrangements. Short solos introduced the band, with the talented Lim shining brightly in such a short space. Kubis's tight arrangements meant that strong section playing lifted the soloists, punctuating and highlighting their efforts.

Something of an accomplished singer himself, Monteiro opted to leave the vocal numbers to his special guests, each of whom brought their individual styles to the stage. Rani Singham, a singer in the classic tradition, brought vigor to Monteiro's "Swing with Me" and color to the stage with a stunning red dress fashioned from a sari. Her voice has real power and she hit the big notes with assurance and swagger.

The stage was then graced with the presence of Rahimah Rahim, Singapore's first lady of swing. Her first recording was back in '72 and she was the first singer Monteiro worked with when the pianist was not yet 17. "L.O.V.E" by Gabler & Kaepfert with brassy, swinging arrangement by David Packer saw Rahim in fine voice. There was a bottle of '66 Chateau Latour Bordeaux up for charity auction with a starting price of $5,000 and although both the Latour and Rahim are of a similar vintage most of the audience were delighted to simply indulge themselves with the singer's voice which has matured well over the years. For jazz lovers it's nice to know that Rahim will also outlast the Latour. What price a vintage voice?

The evening's other vocal number was sung by Monteiro's sister, singer/songwriter Claressa Monteiro, whose Now and Then (Universal Music, 2002) was the first worldwide release by Universal Music of a South East Asian artist. The pretty "Carousel Farewell" was composed by Claressa Monteiro and husband/bassist Brian Benson and had the hallmarks of a classic—melodically memorable and tinged with the blues. Kubis arrangement was again notable for the shades and drama which served to frame Monteiro's nuanced delivery to great advantage.

Between songs two screens either side of the stage displayed photos and well-edited video montage of Monteiro through the years and birthday greeting were relayed by family and friends. An impressive list of familiar faces of some of the many musicians Monteiro has performed and recorded with over the years sprung up: James Moody, Randy Brecker, Paulinho DaCosta, Toots Thielemans, Charlie Haden, Bobby McFerrin, Eldee Young and Redd Holt. Another familiar face who appeared on the screen, though also in the flesh on the evening, was veteran saxophonist Ernie Watts. Watts performing/writing association with Monteiro stretches back over twenty years and on two co-written numbers he reminded all present that pound for pound he remains one of the greatest of tenor saxophonists.

Watts played with the Buddy Rich orchestra in the late '60s and all the years of honing his craft showed on the melodic "Orchard Road" with Watts taking extended solos notable for their musicality and sheer vitality. These solos were punctuated by the impressive tabla playing of Noor and strong, full-ensemble support. Watts really stretched himself on "The Bubala Dance" which was lent added depth and power by the Scott Routenberg arrangement. Monteiro, inspired by his long-time sparring partner's presence put in his most impassioned solo of the evening, which Watts returned and then some. A highlight of the performance—and of the entire evening—was when Watts went toe-to-toe with drummer Goh, trading torrents of notes in a high-octane duel which earned a great ovation. When Watts is on this sort of form—and when is he not?—he is scary. 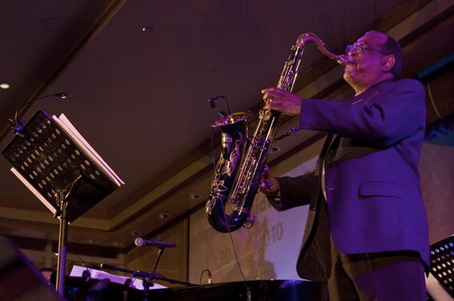 Other memorable performances were the Monterio originals "Brothers" which featured a fine flugel horn solo from the multi-talented Canadian, Gabriel Mark Hasselbach and "Soliloquy "which threw Philippine master saxophonist Tots Tolentino into the spotlight where he served up a tasteful, imaginative solo on soprano. The only criticism that could be leveled at an otherwise excellent evening was that the soloists sometimes suffered from lack of volume, and this was most notable when Hasselbach turned to the softer flute, though his delivery was flawless.

The set closed appropriately with the Monteiro/Jim Aitchison composition "One People, One Nation, One Singapore," an elegiac number which gained in potency as it developed. Tolentino and trumpeter Steve Cannon impressed, as too did Monteiro who played some lovely, dancing blues figures and put the final touch to a memorable evening. At the end of the performance compere Susan Ng announced that the fund-raising efforts inspired by Monteiro and generously supported by the Singapore business community and His Excellency had succeeded in raising over $1,000,000 for Community Chest. Monteiro's musical contribution to Singapore is already immense but his fund-raising efforts in support of charitable causes are of great significance too. That jazz is in some way a catalyst for the betterment of people's lives should be something of which Monteiro, his big-band and jazz lovers everywhere can be rightly proud.