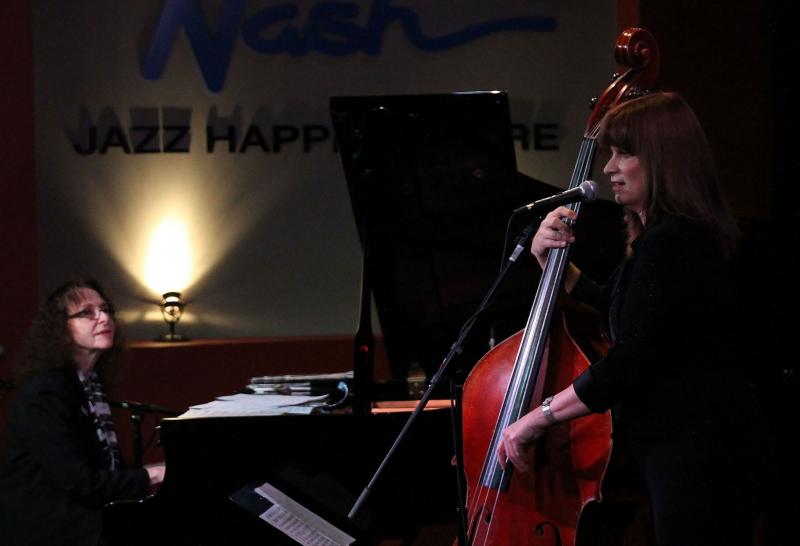 Leitham's quicksilver agility and forceful skill reached far beyond the identity of acoustic bass as a support rhythm instrument. She combined percussive strumming style with glistening bass slides and resonant bowed work, all of which meshed perfectly with Roberts' über-inventive chord changes and incredibly fleet runs.

The pair chose an eclectic repertoire, opening with the Woody Herman swing hit, "Things Ain't What They Used to Be," followed by a series of evergreens and then an intriguing reinvention of the Vince Guaraldi chart, "Cast Your Fate to the Wind." Leitham's bowing expertise enriched "Two for the Road" as the strongly swinging duo expressed a more lyrical mode.

When they exchanged fours on "Gravy Waltz," Leitham delivered double-stop phrases and slithering slides for Roberts to counter with fistfuls of notes and scampering runs. Their rendition of "Tangerine" had Roberts focusing mostly on her right hand in the treble clef while Leitham explored the lower range.

At times, the performance felt like a high-level jam session via brief "arrangements-while-you-wait" conversations between songs. The result was an incredible expression of musical ESP and the joy of camaraderie. The audience reacted with low chuckles and whispered comments in The Nash's intimate 100-seat space.

Both also performed vocally, Leitham singing "Bésame Mucho" while infusing minor harmonies and flamenco licks, then delivering "Detour Ahead" and "Born to Be Blue," as well as her original "Stick It in Your Ear," a Dave Frishberg-esque satire. Roberts sparkled on her signature hit, "Senor Blues," before the pair harmonized a cappella segments in "Centerpiece." The final selection was a "knuckle-buster" (said Leitham) rendition of "Scrapple from the Apple" that turned scatting into an extreme sport as the intense and entertaining concert ended.