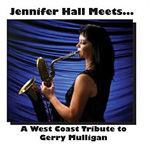 I've heard a number of tributes to the late great Gerry Mulligan, none warmer or more persuasive than this. Jennifer Hall, a superb baritone saxophonist whose abiding respect for Mulligan is evident in every note she plays, has assembled an all-star group of West Coast musicians for a heartfelt remembrance that scans eleven of Mulligan's memorable compositions and another, "Bernie's Tune, that was a hallmark of Mulligan and trumpeter Chet Baker's pianoless quartet in the early '50s.

It's a testament to Hall's prowess that even though she is the leader on this date, she is among the least-known of its participants, an oversight that this album may help to redress. Hall honed her impressive chops playing alongside most of these prominent musicians who have returned the favor by taking part in this irrepressible homage.

Hall has been a member of trumpeter Jack Sheldon's big band for a decade, met trumpeter Carl Saunders while subbing on the Phil Norman Tentet and saxophonist Terry Harrington while doing the same on Bob Florence's Limited Edition. Roger Neumann and Tom Kubis are long-time friends and colleagues, as are bassist Dave Stone and drummer Santo Savino. Her "newer friends include trombonist Scott Whitfield and up-and-coming pianist Josh Nelson. Everyone has a decisive part to play, and no one is less than exemplary.

Hall and Neumann comprise a formidable two-baritone front line on "Five Brothers and "Cat Walk, Saunders is typically awesome on "Elevation and "Line for Lyons, Kubis' expressive soprano adorns "Dragonfly and "Rico Apollo, and Whitfield's fluent trombone adds splashes of color on "Festive Minor and "Rocker. The versatile Harrington divides his time between clarinet ("Apple Core ) and tenor sax ("Walkin' Shoes ), while Sheldon plays a mean trumpet on "Bernie's Tune and "Summer's Over and unbinds his gruff, world-weary voice on the latter, whose lyric was written by Mulligan's one-time girlfriend, the renowned and ill-fated Broadway star Judy Holliday.

Nelson, Stone and Savino are given solo space as well and never displease, nor are they heedless of the basic task at hand, to keep the session swinging under any and all conditions. But even though everyone performs as expected, it is Hall's singular artistry that pushes the enterprise over the top.

Any salute to Mulligan demands a remarkably bold and intuitive baritone, and Jennifer Hall, the West Coast's answer to Claire Daly, delivers the goods. Songs by Mulligan, an enormously talented group to play them, and a rising star on baritone to lead the way—one couldn't wish for more than that. This one's a keeper.