By TIMOTHY J. O'KEEFE
April 26, 2010
Sign in to view read count
April is Jazz Appreciation Month. It's also National Poetry Month, and every Sunday night, the Jeff Robinson Trio accompanies poets at the Lizard Lounge in Cambridge, Massachusetts. The trio provides collective jazz improvisation based on the rhythmic cadence of each poet, creating music that is truly unique to each performance. 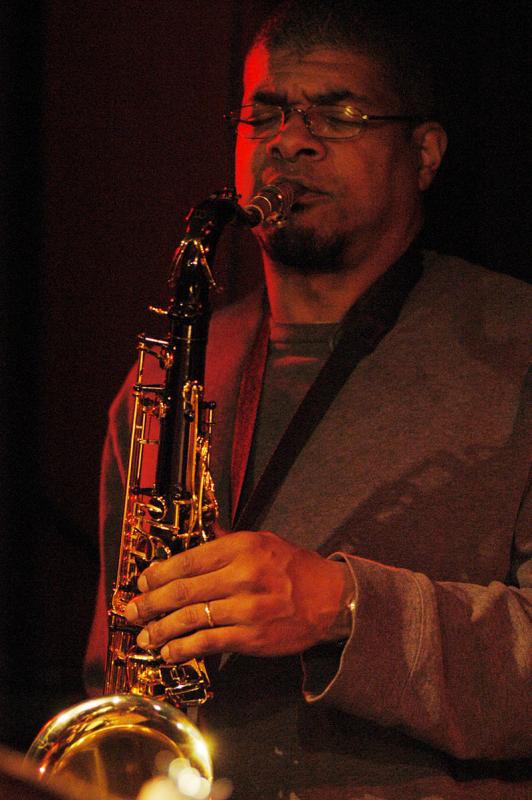 Jeff Robinson hails from St. Louis and moved to Boston to attend Berklee College of Music. To create his one-person play, Live Bird, which is based on the life of Charlie Parker, Robinson creatively draws from his experiences in acting, music and poetry.

In the world of jazz, few musicians are as iconic as Parker. Parker, known as Bird, came of age in Kansas City during the Great Depression—a time when shady politics, bootleg liquor and gambling created an environment in which jazz would thrive. During the 1920s, the vaudeville acts in which Parker's father had performed began to fade as a form of entertainment. In their place, something new began to emerge. Glowing, neon tubes sparked and buzzed venue names in electric light, and inside the venues, some of the era's leading jazz musicians could find regular employment. At places like the Sunset Cafe and the Reno, Parker heard music rooted in blues traditions that used rhythmic figures and contained long melody lines. The sound would become known to a broader audience as Kansas City Swing. These musical influences, along with Parker's desire to discover new sounds, would forge a driving presence in jazz.

When Parker died on March 12, 1955, he had a performance scheduled in Boston. "That's sort of the whole Boston connection," Robinson explained. Bird at the Hi-Hat (1954, Blue Note), Charlie Parker at Storyville (1954, Blue Note) and Boston (1996, Uptown), contain live recordings from Boston performances.

"Charlie Parker was sort of a one man show," Robinson explained. "He did sort of revolutionize and define modern jazz. Dizzy Gillespie should get some credit for that too, but I would say that Charlie Parker was the spearhead of the bebop movement, which in turn lead to other great movements in jazz."

A telephone, a bar top, two tables and a makeshift stage comprise the performance area for Live Bird. Dressed in a gray suit, Robinson made his entrance while playing an alto saxophone. His fingers worked the horn's keys, producing fast phrasings and scattered squawks that wove together to form Parker's "KoKo." Robinson described "Koko" as "[Parker's] variation on the song 'Cherokee.' It's a very difficult piece—somewhat of a signature song. When he recorded it, it became popular almost immediately. His solo was revolutionary, emphasizing the changes at a high speed."

Shortly after completing the opening piece, Robinson scanned the audience, focused his attention on one particular woman and then moved closer to recite a poem. While he uses this element of the play to stir audience reaction, Robinson acknowledges the approach can produce inconsistent results. He recounted incidents where the poem encouraged one woman to give him her phone number, and another where it angered a woman's boyfriend. "That's part of what makes each show fun," Robinson said, laughing.

As the play unfolded, the character Robert Simpson, a writer from a prominent jazz publication, gets introduced as a way to let Parker speak. As if answering questions for an interview, Parker was able to tell his story. With honesty and emotion, Robinson convincingly recounted the hardships and anecdotes that helped shape Parker's life. Through the ensuing conversation, we hear stories pertaining to musicians on the Southwest music scene, like Hot Lips Page, Count Basie, The Clouds of Joy, Ben Webster and Lester Young. Parker's mind raced—Bird bummed a smoke from a member of the audience and then drank whiskey while quoting the Qur'an. He discussed jamming with his mentor, Buster Smith, the use of altered chords, changing melody lines, and then he played "You Came To Me From Out of Nowhere."

Bird reflected on how he dropped out of Lincoln High School, emphasizing that colored schools didn't have much to offer, and free thought should define a human being. He affectionately referred to his education at Reno University, so named after the Kansas City club that hosted after-hours jam sessions that lingered until dawn. Eventually, Bird even hinted at his failing health—heart pains and ulcers—brought on by drug use. His parting words to Simpson were cold and hard: "Stay clean."

After Bird stepped away from Simpson, a passing patron requested an autograph. Bird solemnly stared at the audience, grasping his alto saxophone. Almost reluctantly, the notes of "Parker's Mood" rang out as Robinson exited the stage, leaving only sound as the musician's signature for everyone present.