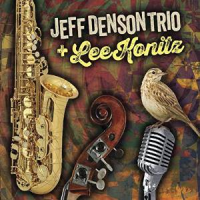 Part of the beauty and challenge in following the late career recordings of saxophone icon Lee Konitz can be traced to the way he continues to grow and evolve, inspired by the many and varied musicians he works with and, in turn, inspiring them. Anybody who's heard him wildly deconstruct a standard with pianist Dan Tepfer, paint ethereal fever dreams with guitarist Bill Frisell, or bound along with saxophonist Grace Kelly can attest to that fact. Konitz is always himself, with that inimitable matte-finished sound peaking around corners or pushing boundaries, but he's never predictable, as each encounter serves as an opportunity to branch out into different territories. Case in point is this recording: an eleven song venture that finds Konitz putting his horn to good use, scat singing, performing rarities from pianist Lennie Tristano's book, and locking in with bassist Jeff Denson's Trio.

Denson has worked extensively with Konitz in recent times, touring with the saxophonist as part of The Lee Konitz New Quartet and appearing on three albums with that group—Deep Lee (Enja, 2008), Live At The Village Vanguard (Enja, 2010), and Standards Live: At The Village Vanguard (Enja, 2014). But here, the shoe is on the other foot. Konitz is the guest in Denson's world, but it's a world that the bassist has shaped around Konitz's past. The saxophonist's well-known "Subconscious Lee" appears twice, Warne Marsh's "Background Music" gives Konitz and Denson a chance to glide along together and solo in gleeful fashion, and Denson honors the relationship between Konitz and Tristano by pulling out numbers like the pianist's "Baby" and "East Thirty-Second," semi-obscurities with snaking bop-based lines.

Élan is tempered by looseness of swing and comfortable tempos throughout this affair. Pianist Dan Zemelman and drummer Jon Arkin prove to be sensitive and supportive in their work, Denson delivers the goods, whether singing a classic or sidling along with his bass, and Konitz plays it cool and straight in his delivery. Or at least as straight as Lee Konitz can play it. Nothing is forced and there's a beautifully casual quality to the music. These performances may seem a bit conservative when measured against some of the saxophonist's other recordings in recent times, but they're no less enjoyable. This is an eminently listenable date.