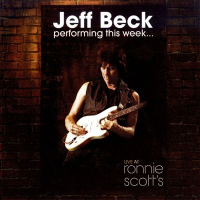 The two CD 'Deluxe Edition' of Jeff Beck Performing This Week Live at Ronnie Scott's is a title to be treasured even though it doesn't contain any unreleased content from the previously issued CD and DVD/Blu-Ray pieces. It's a pragmatic musiclover's delight in that it collects within one jewel case all the performances stretched over those configurations, but more importantly, it documents the iconoclastic British guitarist not just with one of the most distinctive ensembles he's ever worked with, but in contrast with guest vocalists and musicians, not mention a whole other lineup of players.

Illustrating how a configuration can take on a life of its own,the first CD is the real reason to have the set as it collects the 2007 performances from the famous London club all on one disc. As such it represents the logical extension of and, in light of subsequent projects, the culmination of the years he spent pioneering jazz-rock fusion beginning with Blow by Blow (Epic, 1975). Stevie Wonder's "Cause We've Ended As Lovers" appears here from that landmark record, but "Nadia," is only a little less poignant while an excerpt from WiredGuitar Shop (Epic, 1989) reminds that even as he nurtured his finesse with a melody, Jeff Beck's love/hate relationship with the guitar lent itself to some violent, outright savage outbursts.

The lineup's suited to the style too as keyboardist Jason Rebello deftly handled synthesizers on "Space Boogie" as well as electric piano among other devices that add atmosphere. The strength and ingenuity of drummer Vinnie Colaiuta (almost) matches Beck's own, as the former's regular breaks attest, but the presence of bassist Tal Wilkenfeld, while perhaps not much more than a mere footnote in the ex-Yardbird's discography, adds the real distinction to the sound: she imbues her playing on an electric instrument with the warmth of a acoustic one, while the fluidity she commands on "Goodbye Pork Pie Hat/"Brush with the Blues" does not come at the expense of genuinely earthy funk she can conjure up, a pre-requisite for playing with this guitarist.

Paying homage to Gene Vincent in the form of collaboration with The Bluecaps is definitely a minor sidetrack in the career of Jeff Beck, but a noteworthy one nonetheless because the pithy approach he so often adopts as he plays hearkens directly back to this elemental style of rock grounded in the 1950's.

Likewise, the presence of vocalists is a necessity in fully depicting the range of Jeff Beck's work and the two on Ronnie Scott's illustrate the (greater or lesser) wisdom of the man's choices. Joss Stone handles the surging soul of "People Get Ready" handily enough, but Imogen Heap suggests she could as well judging by the way she spits out "Rollin' and Tumblin.' "And Beck demonstrates his admiration for the latter by covering her own tune "Blanket."

The idiosyncratic guitarist is similarly deferential when joined on stage by his predecessor in The Yardbirds, Eric Clapton. The two exhibit their mutual affection for the blues on "Little Brown Bird" and "You Need Love," together a demonstration of simpatico as well as contrasting style that ultimately blossomed into a co-headlining tour two years later.

Ostensibly redundant but rendered distinctive by the combination of its packaging and the superb performance within, Jeff Beck Performing This Week: Live at Ronnie Scott's Deluxe Edition is ultimately an indispensable entry into this truly great musician's discography.