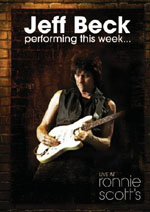 It's becoming increasingly common to release concert performances concurrently in both CD and DVD format—satisfying for those who want to experience the visuals but also appealing to fans who want the audio to be available more readily outside the confines of their living room. Yet it's often superfluous. Watching the performance once is worthwhile, but additional viewings rarely reveal a whole lot more. The audio is almost always preferable, because at the end of the day, the music's the thing. A notable exception is Eagle Vision's DVD release of guitar legend Jeff Beck's Performing This Week ... Live at Ronnie Scott's (Eagle Records, 2008). The music still is the thing, but with additional tracks and bonus interviews with Beck and his group—keyboardist Jason Rebello, young bass phenom Tal Wilkenfeld and fusion powerhouse drummer Vinnie Colaiuta—there's more than enough to differentiate and justify the DVD release.

But even if the DVD were nothing but an exact replication of the CD, as Eagle Entertainment has done previously with CD/DVD releases of Yes: Live at Montreux 2003 (Eagle Records, 2003) and Jethro Tull: Live at Montreux 2003 (Eagle Vision, 2007), a DVD version of Performing This Week makes great sense because, while anyone with an ear can say that nobody sounds like Jeff Beck, this is the first time that it's been possible to watch him in performance, for an entire show, and see exactly why—and, more importantly, how—he's created such a unique sound for over 40 years.

Watching Beck perform is like viewing a force of nature. He's one of the few electric rock/fusion guitarists who plays with his fingers, and it's the very physicality of flesh on string that makes his guitar sing—as does his uncommon use of the whammy bar on his Stratocaster. While there's precious little posing, Beck's an imposing and charismatic presence on stage, and he appears to be having the time of his life here, with performances culled from a one-week run at London's legendary Ronnie Scott's. For a guitarist with the reputation of being a recluse and, at times, brooding man who is happy only while tinkering with his classic car collection while putting out albums on a relatively infrequent basis, with as many as five years passing between releases, here he's all smiles.

He's also clearly digging his band. Wilkenfeld—who is only in her early 20s but looks to be in her mid-teens—is a remarkable find, with her own debut, Transformation (Self Produced, 2007) more than enough evidence that she's a bassist to watch. She delivers an early career-defining solo on Beck's enduring take of Stevie Wonder's ballad, "Cause We've Ended as Lovers." Hearing it on the CD might seem more than enough, but watching Beck's reaction to it on the DVD is worth the price of admission. Equally, Rebello's solo on a frighteningly high-velocity take of the already up-tempo "Scatterbrain"—from Beck's classic first entry into the fusion arena, Blow by Blow (Epic, 1976)—causes the veteran musican to look as though he not only can't believe his ears but that he also can't believe his good fortune to be onstage with these three outstanding players. Colaiuta drives the entire set with a perfect combination of visceral groove and impressive technical virtuosity. Lately he's been getting gigs that prove his chops as a lighter jazz player, but the fact remains that he's best in contexts like this, where he can push the limits and play with unbridled power.

But, at the end of the day, it's Beck who's the star of the show, and watching his unorthodox technique on guitar, it becomes much easier to understand why he's able to lend his instrument such a vocal-like quality—singing, at times, with a pristine beauty, elsewhere growling and screaming with harsh aggression. And while he's rarely thought of as a virtuosic player in the realm of fusion shredders like John McLaughlin or Scott Henderson—and, truthfully, his harmonic knowledge isn't quite as sophisticated—his performance here will surprise those who view him as a rock guitarist with jazz aspirations. Sure, he still leans more closely to the jazz side of the jazz-rock equation, but there are some unexpected surprises here that suggest he's more broad-scoped than purists might think. Few guitarists possess his right hand control, and watching Beck pull everything out of his musical bag—from right hand tapping and chiming harmonics to bends so broad as to seem impossible, and much more—will be a revelation, not just for guitarists who've always wondered how he does it, but for anyone who wants to see just how much two hands, a guitar and an amp can do. Yes, Beck uses effects, but his palette is often far fuller without them.

There are an additional five tracks that don't appear on the CD and, in some respects, rightfully so. Featuring guest appearances by singers Josh Stone and Imogene Heap, as well as another guitar icon, Eric Clapton, excluding them from the CD (admittedly, for time's sake as well), makes that release a purer Beck experience, and certainly one the live album fans have been waiting to hear for decades. At the same time, the bonus performances add to the excitement of the show, especially Stone's take on Curtis Mayfield's "People Get Ready," originally sung by Rod Stewart in a reunion of sorts on Beck's Flash (Epic, 1985). Stone's unassuming honesty and strong interpretive skills surpass Flash's studio take, and the song provides a brief respite before the juggernaut of "Scatterbrain." Heap plays it straight on the balladic "Blanket" but lets loose a bit on a grungy take of Muddy Waters' classic "Rollin' and Tumblin,'" with Beck's distorted wah wah almost as gut-wrenching as the near-vomitous "You Shook Me," from Beck's 1968 debut as a leader, Truth (Epic).

Clapton's two guest tracks are more blues-centric, with "Little Brown Bird" giving Beck one of a number of opportunities to demonstrate his equally vocal-like ability with a slide. "You Need Love" is a vamp-based jam that features Beck beautifully synched with Clapton's vocals, and a chance for the two to take solos that demonstrate why they emerged as two parts of a remarkable trifecta (Led Zeppelin's Jimmy Page being the third) that changed the course of rock music in the late '60s.

The unexpected success of Performing This Week ... Live at Ronnie Scott's has helped revive a career that's not exactly needed it, because Beck has always seemed to return to active playing and touring on his own schedule. Still, this is undeniably the best touring group he's ever had, surpassing even his early group with Rod Stewart. The music may be fantastic of itself, but being able to watch Beck in action for nearly two hours is an opportunity not to be missed—not just for fans, but for those who may wonder why Beck's reputation is what it is. Performing This Week ... Live at Ronnie Scott's may well be the most exciting and revelational DVD release of 2009.

Tracks: Beck's Bolero; Eternity's Breath; Stratus; Cause We've Ended as Lovers; Behind the Veil; You Never Know; Nadia; Blast from the East; Led Boots; Angel (Footsteps); People Get Ready; Scatterbrain; Goodbye Pork Pie Hat/Brush With the Blues; Space Boogie; Blanket; Big Block; A Day in the Life; Little Brown Bird; You Need Love; Rollin' and Tumblin'; Where Were You.