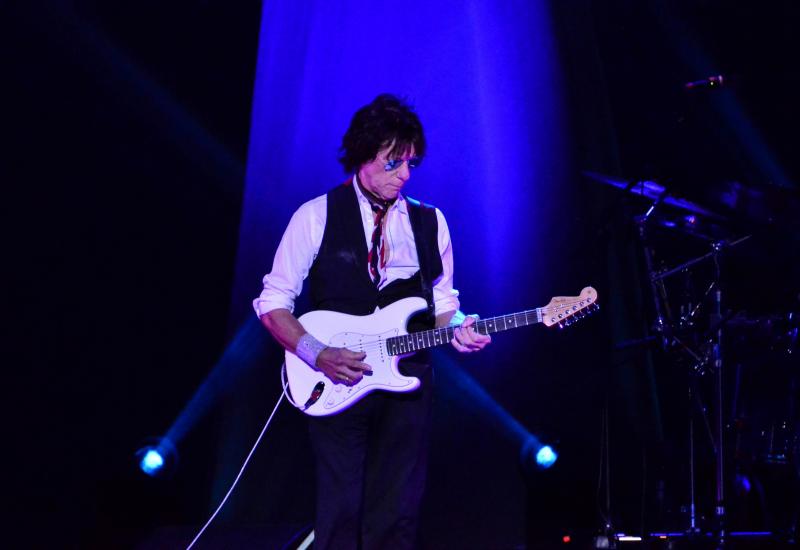 Jeff Beck, IS the "Master of the Stratocaster." He is rock royalty. A two-time inductee into the Rock 'n' Roll Hall Of Fame, with Yardbirds (in 1992) and as a solo performer (in 2009), Beck's career has spanned over 50 years.

In 1965, beck replaced Eric Clapton in the Yardbirds. Although his stay in the band was short, it was memorable. During Beck's tenure, the Yardbirds released the classic hit singles "Heart Full of Soul," "I'm A Man," "Shapes of Things" and "Over Under Sideways Down." After leaving that band, Beck formed the Jeff Beck Group which featured Rod Stewart on vocals and Ronnie Wood on rhythm guitar and bass. This group released two classic albums for Epic Records, Truth in 1968 and Beck-Ola in 1969. The group disbanded later in 1969. Beck evenmtually reformed the band with a completely different lineup and released the Epic Records albums Rough and Ready (1971) and Jeff Beck Group (1972). In 1973, Beck along with Tim Bogert and Carmine Appice formed Beck, Bogert & Appice. The group signed to Epic Records and in 1973 released two albums—the eponymously named debut album and Live In Japan.

After Beck, Bogert & Appice broke-up, the guitarslinger went solo. He released the hit instrumental album Blow By Blow (Epic Records, 1975). It reached number 4 on the Billboard 200 and has been certified Platinum by the RIAA. In 1976, he released Wired (Epic Records). This second solo release reached number 16 on the Billboard charts and also received Platinum certification.

The majority of Beck's solo music is instrumental in nature. His innovative sound melds and fuses blues, rock, pop, jazz, a bit of metal and a touch of electronica. He has been voted among the Top 5 in Rolling Stone magazine's "100 Greatest Guitarists of All Time") and has won multiple Grammy Awards.

Paul Rodgers first achieved fame as the lead singer of Free. In 1970, Free reached the Top 5 of the Billboard singles chart with "All Right Now." After the dissolution of Free in 1971, Rodgers formed the short-lived three-piece band Peace. After Peace, Rodgers along with Mick Ralphs (former guitarist of Mott the Hoople) formed Bad Company. The lineup also included Rodgers' band mate from Free, drummer Simon Kirke, as well as Boz Burrell, the former vocalist and bassist of King Crimson.

Bad Company was the first act signed to Led Zeppelin's Swan Song record label. The band achieved its greatest success between 1973 and 1982. Its biggest hits included: "Feel Like Makin' Love," "Can't Get Enough," "Shooting Star," "Bad Company" and "Rock 'n' Roll Fantasy." Rodgers left in 1982 at the height of the band's fame. At the time he stated that he wanted to spend more time with his family. During Rodgers' original Bad Company tenure, the band earned six platinum albums. In 2001 he returned to the band only to leave again a few years later. He would leave and return a number of times over the years.

During the '80s and '90s, Rodgers released a number of solo albums and teamed up with Jimmy Page in the Firm. The Firm released two albums, The Firm (1985) and Mean Business (1986) on Atlantic Records. The Firm's hits included "Radioactive," "Satisfaction Guaranteed" and "All The King's Horses." The Law, was Rodgers' 1991 musical venture featuring former the Who and Faces drummer Kenney Jones. Its self-titled album (Atlantic Records, 1991), featured the Billboard number one AOR chart hit "Laying Down the Law." In 1993, Rodgers released the Grammy-nominated solo CD Muddy Water Blues: A Tribute to Muddy Waters (Victory Music).

In the early 2000s, Rodgers continued to release solo albums and tour. In 2006 it was announced that Queen + Paul Rodgers would begin producing a new studio album. Throughout its career the band completed two world tours, issued The Cosmos Rocks (Hollowood Records, 2008), and released two live albums and three live DVDs. When Rodgers left the band, it was stated that it was never meant to be a permanent thing. He returned to Bad Company in 2008 for a one-night only performance that was released on DVD. This evolved into a full tour in 2009. In the ensuing years, Rodgers has continued to work with Bad Company and as a solo artist.

Ann Wilson is best-known as the lead singer and songwriter of the classic rock band Heart. Many consider her as one of the greatest female vocalists in the history of rock music. Heart was formed in the early '70s by Wilson and her guitarist sister Nancy. During the band's long history, it has had a number of different lineups—the only constant being the Wilson sisters. The band reached the Top 10 on the Billboard Albums Chart numerous times during its career. Heart was inducted into the Rock 'n' Roll Hall Of Fame in 2013.

Following the release of Heart's Beautiful Broken CD (Concord Bicycle Music, 2016) and its subsequent tour, both Ann and Nancy Wilson decided that they wanted to work outside of Heart to try some new things. Nancy is working with a band called Roadcase Royale and Ann is concentrating on her solo project.

Wilson led off the night, called the Stars Align Tour with a set that leaned heavily on the cover songs found on her Ann Wilson Thing #1 album (New Rounder, 2015) and the soon-to-be-released Immortal (BMG) CD. Highlights of her short but powerful set were: the opening number, the Who's "The Real Me;" Aretha Franklin's "Ain't No Way;" Audioslave's "I Am The Highway" (which was dedicated to Chris Cornel); an impressive interpretation of Amy Winehouse's "Back To Black;" Lesley Gore's "You Don't Own Me;" the Eagles' "Life In The Fast Lane" and the set closer, the Who's "Won't get Fooled Again." The single Heart tune, "Barracuda," was the second song of the set and it received a standing ovation. Wilson is still a powerhouse vocalist.

After a short intermission, Paul Rodgers hit the stage. Rodgers' twelve song set and two song encore was a trip down memory lane and a tutorial in Free and Bad Company music. The lone exception wasn't really an exception. "Ready For Love" was originally a Mott The Hoople song, but the stellar version played on this evening was all Bad Company.

Looking fit and healthy, Rodgers was in fine voice. Other highlights of the main set included: the opener "Little Bit Of Love;" "Can't Get Enough;" "Wishing Well;" "Feel Like Making Love;" The Stealer;" "Movin' On;" "Fire And Water;" "Shooting Star" and "Rock 'n' Roll Fantasy." As the evening progressed, many in the crowd were seen singing along with Rodgers as he delivered the songs that many of the Baby Boomer audience members remembered from their youth.

The encores were all from Free's canon. "Walk In My Shadow" got the fans on their feet and "Alright Now" kept them on their feet and got them into the aisles and dancing with abandon. Rodgers proved that he is still a singer to be reckoned with and that his exclusion from the Rock 'n' Roll Hall Of Fame is definitely a criminal offense.

After another intermission, Jeff Beck and his band were up. When they took the stage, before they played a note, the group was met with a tremendous standing ovation. As usual, Beck sported his sunglasses. He wore a light shirt with rolled up sleeves and a dark vest. He also wore a large sparkly sweatband on his right wrist, presumably as much to stay dry as to protect his wrist from the strings at the base of his guitar.

He was backed by an amazing band that featured Rhonda Smith on bass, Vanessa Freebairn-Smith on cello and 12 string electric guitar, Vinnie Colaiuta on drums and vocalist Jimmy Hall, who is the lead singer of the southern rock band Wet Willie. Hall also played the harmonica.

Beck's set was a guitar clinic. His hands and fingers move ever so slightly, yet the sounds he coaxed out of his axe seem otherworldly. He is truly a guitar god. He and his band put on a performance that could best be described as a jazz concert that sounded like a rock 'n' roll show. The musicianship was intense and precise.

It has been said that the fans do not come to see Beck perform specific songs, they come to hear him play guitar. His playing is mesmerizing and hypnotic. No-one plays like Beck. He produces sounds that bridge the gap between rock, jazz, pop, blues, funk, soul, classical and all other genres. His musical gumbo has to be heard to be properly understood, and even then it is almost impossible to accurately describe.

Beck is not one to hog the spotlight. He just plays and continues to play. He does, however, provide his band members with opportunities to shine. Each was given a chance to showcase their talent. Smith's bass solo was a funky and strong homage to the guitar style of her employer. Colaiuta drum solo was tasty, syncopated, forceful and rhythmic. Freebairn-Smith is clearly a musical genius in her own rite. She can play hard, she can play soft, she can pluck the strings on her guitar and she can coax the most beautiful and divergent sounds from her cello. Hall's vocal stylings perfectly suited the songs Beck chose to include in his set.

On this night the set's highlights included: "Stratus," "Nadia," "You Know You Know," "Morning Dew," "Cause We've Ended As Lovers" and "Brush With the Blues." Though the songs played were secondary to Beck's performance on guitar, vocal highlights included the covers of "I Have To Laugh" (Otis Ruch) "Little Wing" (Jimi Hendrix) and "Superstition" (Stevie Wonder), each of which was sung by Jimmy Hall.

The main set ended with a powerful and amazing version of the Beatles' "A Day In The Life." It was awe-inspiring; you could hear a pin drop while Beck delivered a version of the song that Lennon and McCartney only wish they could have created. Throughout the entire main set, Beck said nothing. His only comment during the evening was uttered when he came out for the encore and received a standing ovation along with whistles, cheers and thunderous applause. He said, "Thank you!" He then raised his hands, spread them out and said, "You have no idea how much it means when I hear this." The ensuing encores were "Corpus Christi Carol" on which Beck was backed by cello only and "Going Down" with Hall on vocals.

Jeff Beck continues, at age 74, to prove that he is a world-class guitarist who is still at the top of his game and remains as one of the greatest guitarists of all time. While it isn't always easy to keep the attention of an audience during a mostly instrumental performance, Beck's virtuosity kept the audience engaged and enraptured.