By DOUG COLLETTE
December 24, 2014
Sign in to view read count 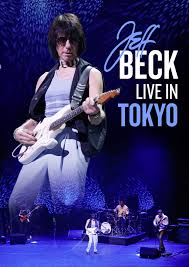 Even though it's tempting to close the eyes and become awash in the sound Jeff Back's making with his band during Live in Tokyo, it's well-nigh impossible not to take the eyes off the guitarist for the duration of this DVD. And it's not because the eccentric guitarist hogs the spotlight—he defers to guitarist Nicholas Meier more than once-for the intro of Jim Hendrix' "Little Wing" as well as Meier's own "Yemen"-and steps aside as bassist Rhonda Smith moves forward literally and instrumentally with her thumb-picking interval on John McLaughlin's "You Know You Know."

But the sight of the British guitar hero's unpredictable logic in playing his white Fenders is riveting, so much so that, in combination with the supreme confidence he displays as he nonchalantly strolls the stage of the Tokyo Dome City Hall, it's an inescapable but ultimately futile challenge to figure out how he makes the sounds that he does over the course of the twenty numbers. It's one thing to watch him manipulate the whammy bar while he fingers the fretboard on "Where Were You," it's another thing to match the gently piercing notes to his actions.

The video and audio recording of this complete performance from April 2014 matches the splendor of Beck's musicianship and that of his three comrades (drummer Jonathan Joseph can play at as fleet a pace as he can heavily pound a backbeat). Crosscuts from one side of the stage to another, from a variety of angles, including multiple closeups of the frontman, often only of his guitar work, complement the motion of the ensemble's interaction. Even at its speediest, for instance, on "You Never Know." there's not any jarring sensation, but rather a fluidity that arises from foursome's chemistry.

And fully as much of this impact derives from comparably muted volume level, as on the short sweet interpretation of the traditional "Danny Boy" as during the more high-powered likes of "Blue Wind" that directly follows. Even in this fairly quick succession of tunes, there's a palpable continuity despite the fact little genuinely extended improvisation takes place on a given number. The Japanese audience clearly stays with the group every step of the way, at least judging by the lightning response given to the former Yardbird's hand gestures on "Led Boots,"the magnetism of the leader shared with his three comrades all natural, enhanced by the modest stage lighting rather than any fancy production.

Jeff Beck and his band own this broad but relatively bare stage which only renders more startling the leaps of dynamism, within selections such as "Big Block" and from its bonecrushing and ear-shattering likes to the ghostly insinuation of the Beatles "A Day in the Life." Fusion pioneer that he is, Beck reaffirms the jazz tradition of reinventing pop classics there, just before he exits the stage, only to return and reaffirms his blues roots with Muddy Waters' "Rollin' and Tumblin.'"

Those gritty frenetics giving way to the luxurious balladry of Stevie Wonder's "Cause We've Ended as Lovers." As stubbornly unconventional as Jeff Beck remains, he clarifies his maverick stance when he adopts this tried and true approach of testing and proving his mettle as a guitarist, in no uncertain terms, on this whispered melody.

El Becko is the earthiest guitarist of his English generation, so it only stands to reason he would conclude the ninety minute plus set with the funky likes of "Why Give It Away" and this playful ending, like the sequence of songs, makes perfect sense with the spoken intro at the start of the video, plus the setlist commentary and band on band bonus features (in both of which interview segments the musicians evince a pleasure similar to that which they radiate as they play).

Essayist Peter Mukowski makes a valiant attempt to accurately portray the history and personality of Jeff Beck, but his prose is no match for the defining photos alongside it in the booklet and only ends up proving how difficult it is to find words to capture this man's genius.