By DOUG COLLETTE
January 21, 2016
Sign in to view read count
The early phases of iconic British guitarist Jeff Beck's solo career proceeded in fits and starts, due in no small part to his admittedly temperamental nature, but also via twists of fate that, in fairly quick succession, stymied his progress then accelerated it proportionately. The original Jeff Beck Group, including vocalist Rod Stewart, bassist Ronnie Wood, drummer Mick Waller and, in later stages, pianist extraordinaire Nicky Hopkins, might've established a breakthrough at their appearance at the Woodstock Festival in 1969 had they played the confirm gig. But Beck dissolved the band in a tempestuous fit (or so the story goes), soon after to suffer serious injuries in a car crash that left him inactive until the assembly of a new Jeff Beck Group in 1970. As heavy on nuance as visceral impact this time around, the familiar elements from the preceding lineup also planted the seeds for Jeff Beck's groundbreaking jazz-rock fusion piece, Blow by Blow (Epic, 1975), the chronological steps of which these comparatively low- profile but lovingly executed reissues from Iconoclassic nevertheless lay out in textual and sonic detail. The continuity in Paul Myers companion essays clarifies the Jeff Beck story to the same extent Vic Anesini's remastering does the music. 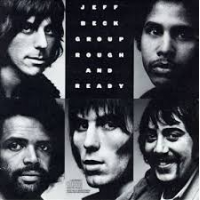 Its title no doubt designed to signify a statement of purpose on Jeff Beck's part, Rough and Ready had something of a still-born genesis, with an early version of the record written and recorded with a wholly different vocalist than Bob Tench. Alex Ligertwood, once a linchpin of Brian Auger's Oblivion Express, had composed and sung material that Epic Records rejected in its infinite wisdom, so Beck decided to oversee the reconfigured ensemble in the studio himself, the result of which was a collection of tracks more impressive for the ensemble playing than the material itself; Beck's overdubbing of various guitars is particularly inventive, for instance, on "Short Business," while "Max's Tune" is a haunting piece more befitting its original title of "Raynes Park Blues," its deeply evocative atmosphere clearly presaging the George Martin production on Beck's next all-instrumental album. 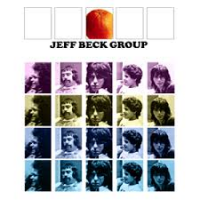 Somewhat shorter on atmosphere than em>Rough and Ready, due no doubt to Beck's wishes for a bonafide producer, which he found in the estimable likes of guitarist Steve Cropper, he of Booker T, & The MG's, the record known as 'The Orange Album" (for its eye-catching cover graphic) is nevertheless most memorable for two majestic instrumentals. The closing "Definitely Maybe" is especially exalting in the palpable yearning that permeates Beck's guitar, but "I Can't Give Back the Love I Feel for You" isn't much less bittersweet or potent in its emotive delivery. Don Nix' "Going Down" is the most durable track on the album (one Beck still plays today) and it does feature the virtues of the band quite handsomely: Max Middleton's keyboards could sound equally earthy or ethereal, while drummer Cozy Powell plays like two percussionists fluidly in tandem with one anohter.

Tracks: Ice Cream Cakes; Glad All Over; Tonight I'll Be Staying Here With You; Sugar Cane; I Can't Give Back the Love I Feel For You; Going Down; I Got to Have a Song; Highways; Definitely Maybe.