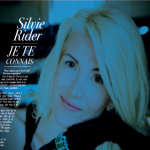 Munich borne Silvie Rider moved to her husband's (Red Young) home of Austin, Texas and recorded a half-Anglophone/half-Francophone album. If that is not the top of multicultural blending, then nothing is. Okay, but first, who is Red Young? Oddly, he would be the keyboard player of late of Eric Burdon and the Animals. Could this story grow stranger? Perhaps, only if Tiny Tim made an appearance and, gratefully, that did not happen. And if that is not enough, this is all taking place in the State of Texas, no less. With the female jazz vocalist market drowning in recordings, it would be criminal not to listen to all of them, as few of them are really bad. Broad listening better clarifies what is a good release and what is an exceptional one.

Silvie Rider's debut, Je Te Connais ("I Know You") is a European breath of fresh air. Her lightly accented English gives her breathy purr a hurricane's worth of sex appeal. Couple this with husband Red Young's keen arrangements, and Je Te Connais becomes a jazz vocal offering that rises to the top for attention. The opener, "I Love Paris" is a perfect beginning to this collection. Singing in French and English, Rider imparts a sharp sophistication to the standard. The original "No Worry, No Hurry" showcases Rider's thick sensuality over a strutting, confident piano line. Young's organ playing produces a complex mix that swirls.

"Autumn Leaves" is given a like presentation, with Alex Coke's flute spicing things up nicely, giving a sharp citrus edge to Rider's humid, languid vocals. The title piece, a Rider original, is all Serge Gainsbourg, from the whispered-spoken French introduction over a mantra beat to the lush orchestration. "Everytime We Say Good Bye," "Tomorrow Never Knows," and "My Foolish Heart" make up the ballad core of the recording. Rider's voice is elastic like Betty Carter's, and all- knowing and informed like Edith Piaf. Rider and the The Beatles both benefit of Young's arrangement of "Tomorrow Never Knows," with the singer's voice doubling the propulsive head.

Rider spins John Coltrane's "Giant Steps" into the disc's highlight, backed brightly by Young and Sam Lipman, who plays an autumn-dry saxophone Rider scats with the best of them on this exceeding difficult song. Alex Cook's bass flute introduces a spooky, smokyt closer, "Nature Boy," summing up the proceedings with the same drowsy sexuality that permeates the disc from beginning to end. Je Te Connais delivers on all entertainment fronts.

I Love Paris; No Worry No Hurry; Les Femilles Morte/Autumn Leaves; Je Te Connais; Everytime We Say Goodbye; My Foolish Heart; Wild is the Wind; Giant Steps; Once in You Life; Nature Boy.