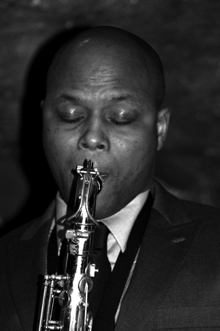 J.D. Allen Trio
Bohemian Caverns
Washington, DC
February 27, 2010
Saxophonist JD Allen's music is an outgrowth of the mystical and transcendental experimentation key jazz musicians undertook in the sixties and seventies. However, unlike many contemporary performers who explore this tradition as a stylistic choice, perhaps driven by admiration for Coltrane's sound, Allen's exploration of this style is founded in his personal experience, musical direction, and deep spiritual sense.

"When I am on the stage I am not actually thinking [about God]. But in the preparation, that is something I consider," stated Allen just before stepping onto the cramped, slightly raised stage at the historic basement club Bohemian Caverns, where he began the second night of a two-day stint. "I ask God to lead me where I am supposed to go—and he does it."

Allen then proceeded to captivate the capacity crowd with a seamless set of music that appeared to flow from a deep pool of inspiration; music that projected a rare sense of strength, emotional clarity, and personal serenity. Without pausing to announce tunes, or, it seemed, even to take a breath, Allen and his trio mates, bassist Gregg August and drummer Rudy Royston, delivered one exhilarating tune after another, transitioning effortlessly between compositions.

"I never make a set list," explained Allen. "I just read the audience and go off of that. Fortunately my musicians know the music by heart. They can change on the fly if I want to change." In many instances a band-leader's choice not to call tunes, or to speak with the audience, can feel like a contrived homage to Miles Davis's cool, and "improvised" transitions from tune to tune, however seamless, selected from a rehearsed set of stage attitudes. But in Allen's case, the trio was clearly devising moment to moment what would come next, blending the varied themes of Allen's critically acclaimed albums I Am-Am (Sunnyside, 2008) and Shine! (Sunnyside, 2009) to create a dynamic and expressive unified experience.

By any measure, success has arrived for Allen. His albums have been well received, he will be appearing at several major jazz festivals, and he has been written about enthusiastically by major media outlets, including recent mention in "The New Yorker." But success did not come easily to Allen. In the not-too-distant past, Allen found himself struggling not only musically, but personally and financially—unable at some points to make the rent. Advice from a mentor and a refocused spiritual commitment have since helped to reshape his life.

When asked about faith's role, Allen answered, "I don't even want to say the word religion. Religions start wars. Any book you use—I happen to use the Bible—is a handbook for life. It is a tool to bring good things into your life. That is a crutch for me. God is a crutch for me, and I use it."

This spiritual experience also helped refocus Allen's musical expression, and has become a profound part of his artistic vision. Specifically, the themes for two of his latest releases are both based on scriptural passages. I Am-I Am is a reference to God's response to Moses' question, "What do I tell your people?" and Shine! on Matthew 5:16, "Let your light shine so that man can honor your God in heaven." Further articulating the inspiration behind "Shine," Allen explained that it is "really about reconstruction and deconstruction—within form."

The character of this musical deconstruction and reconstruction was made clear as the JD Allen Trio performed on stage at the Caverns. Opening with a rendition of "The Cross and the Crescent Sickle," from I Am I Am, the trio expanded on the song's arabesque melody, creating an explosion of interwoven improvisations that, in a preview of what would enfold throughout the evening, used the relatively compact composition presented on the album as a platform for extended explorations. Next came a rapid fire version of "Northstar," the jaunty melody driven by Royston's phenomenally propulsive percussion as Allen crafted an aggressive solo imbued with a dose of Detroit grit absent on the original recording. 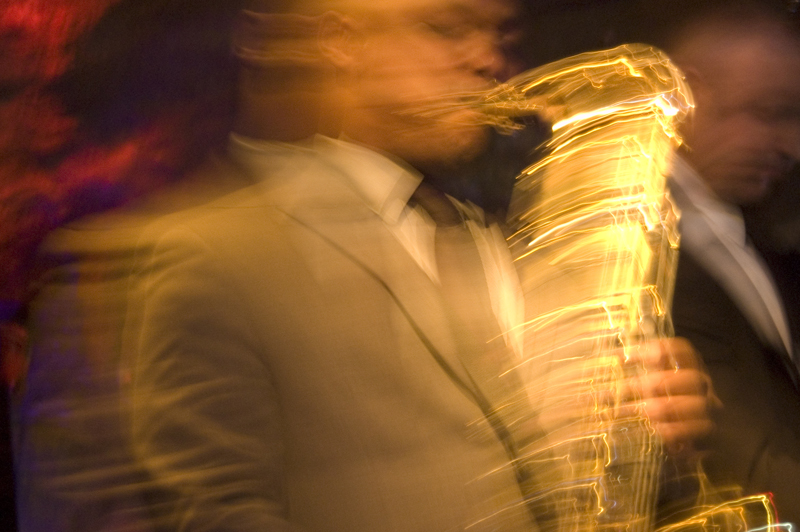 Flowing directly out of a solo patiently devised by August, the band then turned to the Middle Eastern-tinged "Sonhouse," the intricate, rhythmically cracked "Teo (Ted's Theme)," and a meditative blues, "Angel," all from Shine!. Of these latter three, "Angel" was particularly notable for August's strolling bass lines, and Allen's contemplative solos that brought to mind a poignant ramble down a familiar path. This was captured by the careful observation and new perspectives granted only by extreme slowness.

Allen then returned to I Am-I Am for the final three pieces "Titus," "Ezekiel," and "Pagan." With this triptych the trio reached its peak, their musical voices blending into an ecstatic call, as Royston's turbulent drums and August's surging bass lines ignited Allen's increasingly fervent solos to sonorous pathos and new exaltations.

In the end, aided by his band mates' talent and the close space of the Caverns—which enabled the audience to participate in a way that is simply not possible at larger, more staid venues—Allen led listeners through a euphoric deconstruction and reconstruction of musical forms, reflective of a sense of transformation and rebirth. The result was a musical experience of rare aesthetic achievement and emotional power. 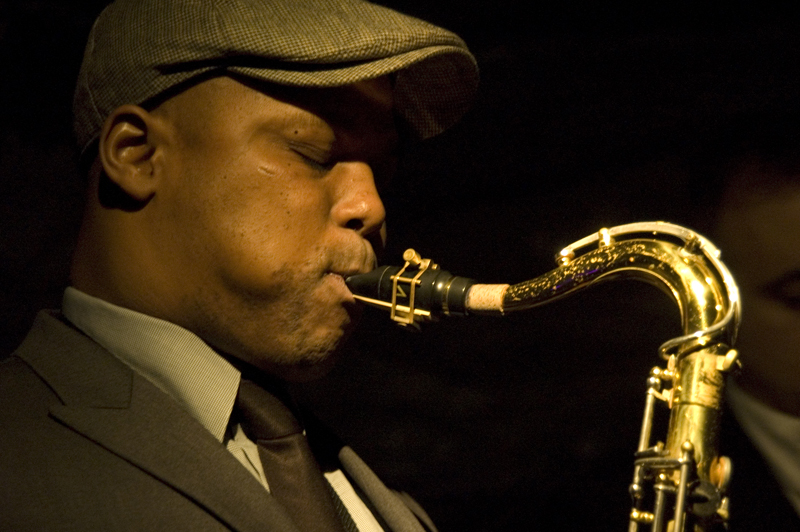