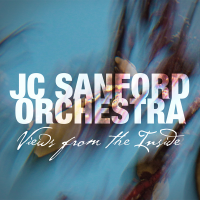 Views From The Inside is a study in contrasts and opposing forces. It's a work of compression and expansion, sonic saturation and sparsity, and consonance and dissonance. It's music that's alternately grandiloquent and direct, pointing to a place where high art and simple emotional expression aren't at odds with one another. In short, it's everything that's glorious and right about the state of the large ensemble in jazz.

JC Sanford, the composer-conductor-trombonist at the helm of this operation, is both a keen student of large ensemble history in jazz and an artist looking to extend the possibilities within this particular area. He's played a pivotal role in the large ensemble renaissance taking place in New York, serving the music in three different ways: He acts as scene-maker, catalyst, and champion of the large ensemble, curating the "Size Matters" series at Brooklyn's Tea Lounge; he shapes and sculpts the sounds coming from some of the most cutting-edge large ensembles operating today, conducting John Hollenbeck's Large Ensemble, the Joel Harrison 19, the Alan Ferber Nonet With String, and other groups; and he furthers the format through his own work, leading this boundary-pushing orchestra. Thus far, he's received more ink for the conducting and curating than anything else, but that could all change thanks to this bold release.

It could be said that every piece on this album has its own personality, but that would be looking at this in too-simple fashion. Every piece of every piece on this album has its own sonic identity and constructional aesthetic, but that's not to say that Sanford isn't a fan of certain ideas and devices. Anchoring ostinatos, ever-growing and rising sonic stacks, muddying and clarifying of the harmonic waters, a balance between structural specificity and openness, and shifting focus between the greater whole and its composite parts are all tools that Sanford relies on. "An Attempt At Serenity," which opens the album, touches on a few of these points without wait. Layered Buddhist recitations immediately meet up with tight-voiced dissonance, but the seas part for trumpeter Matt Holman. "Your Word Alone," which relies on strange connections and juxtapositions, comes next. It presents as a march-of-sorts, but brief, full-on assaults, hints of tango, and a whole lot more sneak into the picture.

The pieces on the album can be divided into three distinct categories: Ambitious long-form works, a series of vignettes tied to Brooklyn, and brief tête-à-têtes that match trumpeter Taylor Haskins with drummer-percussionist Satoshi Takeishi. The first category includes a relatively serene, Sanford-focused waltz ("Robins In Snow"), the classically-infused, wide-ranging title track, and a trippy journey through the world of serialism ("Sky. Good."). The first two Haskins-Takeishi numbers are transitional blips on the radar, but "Systems Two"—the only one of the duo encounters that also falls into the "Brooklyn Vignettes" category—shows what can be done when others are allowed in on these private conversations.