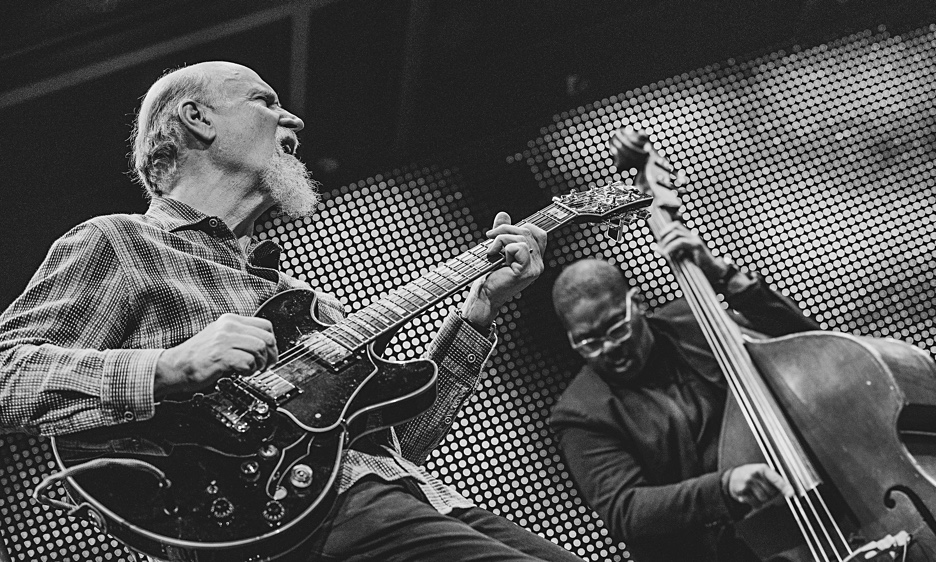 Towards the second half of Jazzkaar, there was an invasion of starry Americans, overwhelming the normally quite striking wealth of indigenous Estonian talent. As ever, the fundamental structure of this 10-dayer revolved around its two main stages in the Telliskivi Creative City, Vaba Lava and its smaller sister next door, Punane Maja. This last has been extensively reconfigured since Jazzkaar's 2018 edition, enlarged, with its stage placed more centrally, retaining a certain intimacy, but also allowing a larger gathering to enjoy good sightlines to the stage. There has also been a massive improvement of the general aura, with milky mood lighting pervading the space.

Those big name Americans weren't in that space, though, instead inhabiting the larger stage of Vaba Lava. The Joshua Redman Trio played a 6pm set, the line-up featuring Reuben Rogers (bass) and Gregory Hutchinson (drums). The latter appeared onstage wearing his socks, shoes left behind, continually dropping sensitive bomb-beats, filling his work with a continual cascade of springing detail. Redman began cooly, but it didn't take him long to start filling his phrases with a keening high level exuberance, flowing and crying, squealing and honking. He revealed that this was their first trio gig for a few years, but the band nevertheless sounded well-primed for action.

A typical contrast between standards and originals was "Surrey With The Fringe On Top," chased by "Back From Burma." Redman's own "Second Date" was a swinging waltz, deep and warm, his knee beginning its trademark hoist into the air, then the other knee, when we knew that full awakening into expression had arrived, as the number wended its way higher. There was a kind of Medieval dignity to the clear shaping of Redman's high notes. The reasonably new composition, "Blues Down The Line," had Hutchinson thranging gong-on-cymbal, starting up a mega-solo of breakbeat trip-hammering tension, leading to a last explosion. Redman shook up the old and the new again with Oscar Pettiford's "Tricotism," a fluffy groover, brushes out for Hutchinson, so that he could calm himself, before the bigger drum spectacle of "The Ocean" a Led Zeppelin ditty. This was the first of Redman's well on-form festival appearances in the 2019 season.

John Scofield gave a lunchtime talk on the day of his gig with the Combo 66 Trio, beginning with his first influence, The Beatles, at the age of 12. He was interviewed by the excellent Estonian bassman Peedu Kass, who did a fine job of winkling out amusing anecdotes from the guitarist. Scofield recalled his early days in NYC, taking the train in from the suburbs, to hit the blues gigs. "Jazz is hard, blues is easy, everybody knows that," he says, controversially. "But, you need the feel, too...."

Berklee was where he really got his shit together, he says, when Gary Burton taught him, playing together in the late afternoon, the early evening, and on many days. In early times, Scofield gigged with Gerry Mulligan and the George Duke/Billy Cobham band. He still doesn't regret not graduating from Berklee, aside from wishing he'd taken more arranging classes with Herb Pomeroy. Ultimately, says Sco, it's best to go your own way, but he recognises that a degree allows folks to teach, and up their chances in the college realm.

"None of us are ever ready!" he emphasises. "It's all a work in progress." Scofield also talked about the balance between being creative and being a publicist (or hustler, or even a whore). He says he'd play with a mass murderer if they made him sound great, though clarifies this by deciding that perhaps he'd limit that to a killer-of-one. "There's no question that's too stupid!," Scofield encouraged, as the q'n'a section arrived. The only time he plays acoustic is when it's on an axe that's not plugged into an amp. He's hyper-balanced, checking out all facets, all arguments, having the indecision of youth, and a very open mind. These are just some of the sage statements Sco made during what was one of the best talking sessions heard at a festival in a good long while. We were now fully primed for the evening gig.

Scofield was joined by Vicente Archer (bass) and Bill Stewart (drums), in a trio version of Combo 66, rather than the full quartet with Gerald Clayton on piano and keyboards. This was probably a good deal, stripping the sound down to a dominant guitar lead. There were volatile guitar and drums exchanges right at the start of the set, rather than in the usual climactic position. Scofield delivered clipped, or even stunted, phrases to make up a riff progression, with stopped spaces in-between lines. There was a country music inflection to "Green Tea," a tendency that's become quite regular within Scofield's output, loaded with twang and warble. Slow-toot phrases cut an angular swathe, before Charlie Parker's "Au Privave" introduced a supple, liquid flow. The leader's ongoing solo melody became even more of an overt solo as the number progressed.

Scofield shared his alternation between originals and standards with Joshua Redman, both of them capitalising on this shuffle of eras. He opened up "But Beautiful" alone, softly prior to Stewart's brushwork, which was a touch too active by comparison. He was probably gearing up for his own "F U Donald" (don't think he's talking about the Duck), from his new album. His trap anger strut had Scofield's lubricated strings and Archer's pulsing bass working together as Stewart played like he had a Donald photograph pasted to each of his drumheads and cymbals. Archer even appeared to have damaged his fingers by the end.

The Italian duo of Rosario Giuliani (saxophones) and Luciano Biondini (accordion) appeared on the Punane Maja stage, investigating the music of Ennio Morricone and Nino Rota, that country's greatest film music composers. The former's "Cinema Paradiso" and the latter's "La Dolce Vita" themes led to a Giuliani original that continued the mood. After a short introduction, it cantered off into a percussive accordion romp, with a capering soprano horn that made it more spirited than the preceding favourites. Next came "Once Upon A Time In America" and "La Strada," with some rosy- cheeked circus mischief, the pair engaging in some friendly tussling for primacy, in the name of shared momentum.

On the bigger stage, the Hungarian fiddler Félix Lajkó led his trio (guitar and upright bass), playing impressively on a technical level, but delivering each tune with a speeding, overblown bombast that turned him into a folk-pomp troubadour. There wasn't much pausing for thought, but a dense gush of clever contortions, with many, many notes, and not much sensitive feel, or dynamic contrast.

Drummer Mark Guiliana played to a standing crowd, but this might have been a tad ambitious, given that his Beat Music bunch didn't quite prompt the expected dancing reaction from the gathering. This new-ish band reeks of 'concept,' with all members garbed in orange boiler suits, making them appear a touch more accidentally ridiculous than Devo. When compared to Guiliana's work in Mehliana and High Risk, the beats here had a too-robotic feel, taking the plastic- funk template too far. Any way, it's always worthwhile to catch Guiliana in any shape, and perhaps Beat Music will evolve and strengthen their vision (and danceability).

This year's Jazzkaar presented fewer startling Estonian acts, at least during the six days that your scribe was in town, and there were no Afro-Arabic-Latin artists on show, which is usually the case at most festival editions. It was left to pianist Kirke Karja to deliver the most exciting Tallinn-o-centric performance, and Estonian Voices to hit it off with Bobby McFerrin during a set that mostly revolved around inspired improvisation. This was the year of the Stateside leaders, with McFerrin, Redman and Scofield all on masterful form.