By CHRIS MOSEY
December 8, 2016
Sign in to view read count 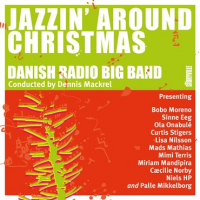 The trouble no doubt is that Christmas is so quintessentially square or unhip. What self-respecting hipster would dream of walking in a winter wonderland or taking a ride on a sleigh drawn by Rudolf the Red-Nosed Reindeer?

Nonetheless, the Danish Radio Big Band have fearlessly come up with that rare item, a Christmas jazz album.

Dennis Mackrel conducts. His credentials are immaculate: drummer with the Count Basie band from 1983 until the Count's death the following year; and with later incarnations fronted by Thad Jones and Frank Foster. Since then he's played with the American Jazz Orchestra, the Carla Bley Big Band, the Vanguard Jazz Orchestra, Buck Clayton's Swing Band and the Dizzy Gillespie All Star Big Band.

Under his baton: an impressive and varied array of guest vocalists, including Ola Onabulé, who describes himself as a "British Nigerian soul funkateer"; Curtis Stigers, a latter day Sinatra from Boise, Idaho; and Miriam Mandipira, from Zimbabwe.

Danish vocalist Sinne Eeg teams up with Mads la Cour (flugelhorn) to dust off "Jingle Bells," perhaps the best known (and corniest) of all Christmas songs.

Another Dane, Mads Mathias is responsible for the only original on the album, "Chop Chop (The Xmas Tree)," which holds its own well among all the good old good (sic) ones.

Sweden's Mimi Terris teams up with guitarist Per Gade in a valiant bid to breathe new life into "It's The Most Wonderful Time Of The Year" (which it's not of course; it's usually dismal and grey).

The DRBB save their best till last: a lovely, lyrical, if somewhat spacey version of "When You Wish Upon A Star," played by Danish trumpet star Palle Mikkelborg, best known for his extended composition "Aura," dedicated to Miles Davis. It comes as a great relief after all the vocals with their schlocky lyrics.

I’ll Be Home For Christmas; Jingle Bells; Deck The Halls; It’s Beginning To Look A Lot Like Christmas; It Came Upon The Midnight Clear; Chop Chop (The Xmas Tree); It’s The Most Wonderful Time Of The Year; I Pray On Christmas; Snowfall; This Christmas; When You Wish Upon A Star.