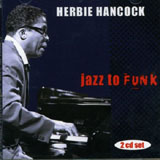 Aussie label AIM's motives might need to be called into question with the release of the new Herbie Hancock set Jazz to Funk. It features the reissues of two obscure sessions from the '60s, both of which have been seen before, albeit under different titles.

The first disc, previously released under drummer Albert "Tootie Heath's leadership as Kawaida (and later under Hancock's name as Baraka), features five raw, improvisation-oriented cuts from a 1969 session. Interesting, African-themed work from all the participants pervades throughout, perhaps most notably by flutist Billy Bonner, who gets plenty of opportunities to stretch out, especially on "Dunia , which features an unusual spoken-word component. Who is doing the speaking isn't clearly explained in the liner notes, though one would assume that it's Heath, since he was originally credited as the leader.

These tracks are much more far out and even psychedelic in nature than those found on the more straight-ahead disc two, which was previously released in 1999 as Blowup Extra Sessions. Many will recall Hancock's sonic contributions to Antonioni's 1966 cinema classic; these cuts were supposedly left over from that film's soundtrack recording sessions. However, they don't, for the most part, sound much at all like the funk-oriented music heard on the original Blowup soundtrack.

What we have here is eight fairly standard exercises in highly accessible hard bop, most of which come in at under six minutes. Therefore, the impressive personnel listed in the rather suspicious liner notes don't get much time for showcases of their individual talents. The music is enjoyable hard bop, albeit not as especially unique found on Hancock's Blue Note albums or work with Miles from the period.

The Blowup disc does feature, however, a trio of funky, more rock-driven tracks at the end of the disc that would have fit perfectly into Antonioni's film. Hancock doesn't appear on the tracks, but their guitar, vibes and conga-centered arrangements will nicely complement any fan's mix CD of '60s lounge tracks.

Although fine music can be heard throughout Jazz to Funk, it isn't recommended to anyone who has yet to acquire the actual Blowup soundtrack or even Hancock's '60s Blue Note work. The sheer randomness, as well as the lack of any comprehensive backstory in the liner notes, causes one to believe that the label is less interested in offering a substantial addition to Hancock's vast discography and more inclined to cash in on the pianist's recognizable name via a couple of sessions whose rights it was lucky enough to acquire. For Hancock completists only.