Jazz: The Sacred and the Profane 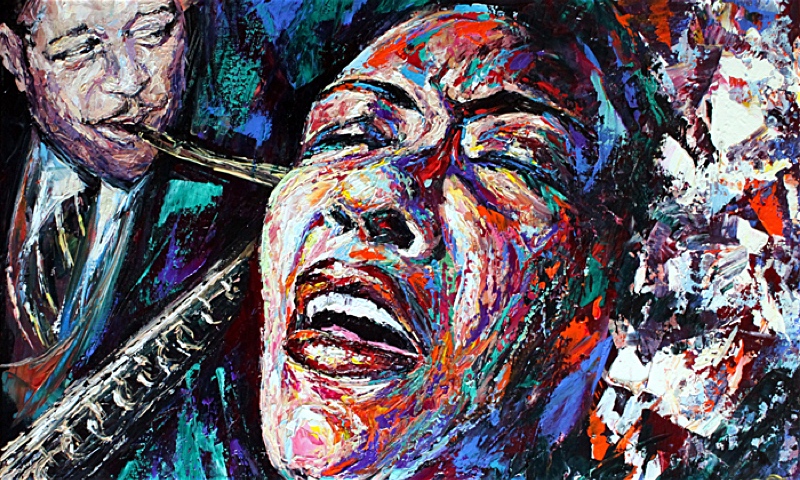 By VICTOR L. SCHERMER
May 13, 2016
Sign in to view read count
"As above, so below" —Hermes Trismegistus

A warning: this article is worth reading only if you believe, as I do, that jazz is not just a form of entertainment, but an art form that has deep significance for our lives and contributes to our search for meaning. I fully appreciate the value of "digging the music" and leaning into it for its rhythmic syncopation and feelings of fun and excitement. But for many of us, jazz is part of our search for human connection and greater understanding of who we really are, deep down, in our spirit, our soul. If you are anywhere in that territory, you might find my musings of interest.

In his groundbreaking book, The Sacred and the Profane (Harper, 1961), historian and philosopher Mercia Eliade contended that religion and everyday existence are separate realms of human experience. He equated the sacred with the religious and the profane with our everyday life in the world of material things, desires, and troubles. I think this is the way most religious people feel, or how they would like to feel. They would like it if everything were ideal and purified of lust, grief, and evil, even though they realize that they themselves are not so well-designed. In what follows, I take a position different from Eliade, although some of my views were influenced by him. I believe that the sacred and the profane are two poles on a continuum of the human condition. I believe that jazz, as an expression of our deepest humanity, reflects both the good and bad in us, as well as the sacred and the profane in the people, places, and things that each of us experiences in our brief sojourn through life.

What strikes me as most characteristic of jazz, aside from the specific rhythms and harmonic structures that immediately announce its presence, is its ability to express the sacred and the profane in one implosive moment: heaven and hell, with the "sweet spot" being somewhere at their intersection in the human condition. I remember hearing a recording of Billie Holiday singing "Some Other Spring" and thinking how majestic was her expression of love and the singing heart, and at the same time feeling her hellish ache. I've experienced this feeling of duality in almost every jazz performance I've ever heard, although it is often more subtle and nuanced than Holiday's. Clifford Brown's trumpet playing was very joyful, but, as a friend pointed out when he first heard Brownie's music, "There's a tailing off at the end of his phrases that's like dying." (My friend knew nothing about Brownie's untimely death, but it was as if he heard it prophesied in the music.)

Even in a tune as exhilarating as "Take the A Train," you can hear the unnerving shaking of the subway cars and the limbo state of being between the stations. Reviewing my various listening experiences, I can hardly think of any exceptions to this fusion of opposites, except perhaps in the upbeat music of the swing bands like Glenn Miller and Benny Goodman whose "feel good" music helped everyone get through a Great Depression and a World War. Even le jazz hot of the roaring twenties possessed a tinge of sadness, which made Bix Beiderbecke's playing so poignant. Most of the time, jazz, even in its ecstatic moments, can't help expressing the mixed emotions that make life bittersweet.

How could any musical genre draw equally and simultaneously from two such divergent opposing forces as the sacred and the profane? The answer may lie in the way that both include an encounter with death, the church music speaking to the initiation into eternal life, and houses of ill repute being places where you could revel before death finally swallowed you up. So then you have the funeral street band playing "When the Saints Go Marching In," taking the deceased to his or her grave with a mixture of joy and sadness. Death invokes both the heavenly spheres and the underworld, and while Western religions present them as places of reward and punishment for deeds done, many world religions and mystical traditions see heaven and hell, the sacred and the profane, light and dark, as manifestations of the eternal wheel of creation and destruction, the grand illusion or maya of the world that is overcome by enlightenment and transcendence, not by going to the extremes of pleasure and pain, heaven and hell, but by seeing the ultimate Truth that lies behind them. At its best, jazz plunges into the abyss and ascends to the stratosphere, but, in the final analysis, it transcends them both through spontaneous leaps into the unknown.

New Orleans was a multi-cultural mix like no other, so that in addition to church music and entertainment, there were the French and Spanish impressionist songs of the creole tradition. Above and beyond the European influences, however, jazz from the very beginning was deeply infused with African and Caribbean music and dance that existed before "civilized" Europeans invaded the free space of the jungle, the desert, and the sea. Jazz is trance music: it emanates from and induces an altered state of consciousness. In this state of consciousness, phantoms arise and take over the body. Things happen spontaneously outside of our control. Everything is up for grabs. In the trance, we hover between life and death, good and evil, ecstasy and despair. Such precarious experiences can and do lead to self-transformation. Energies are released that may be dangerously psychotic but can also facilitate healing and enlightenment.

Of course, much of the jazz we listen to on a daily basis is not as mesmerizing as a rhythmically induced trance, but any jazz set or album that has outstanding improvisation will almost always leave the listener feeling a bit dizzy and not quite the same as before. The spontaneity, surprise, and successful negotiation of difficult passages produce a mild trance and even a shift in personal agendas. Consider John Coltrane's famous recording of "My Favorite Things" (Atlantic, 1961). He took the lilting tune and played with all its possibilities until it became both rapturous and discombobulating at the same time. It's light and ingenious, like Mozart, but at the same time there's an element of protest and disturbance. You can decide for yourself which is sacred and which is profane. I prefer to think that, paradoxically, Trane's disturbance is sacred, like the messiah making prophesies, and the lilting pleasure becomes almost profane in its ironic juxtaposition. Indeed, this disturbance within the sacred is the motive force that took Trane into his excursions into free jazz and spiritually-based music, as we can judge from A Love Supreme (Impulse! 1965) and Meditations (Impulse! 1966).

In addition to the trance state, jazz induces a dream-like reverie which you can readily hear, for example, in Sarah Vaughan's version of Tadd Dameron's "If You Could See Me Now" ( Musicaft, 1946) and Johnny Hartman's rendition of Billy Strayhorn's "Lush Life" (John Coltrane and Johnny Hartman, Impulse! 1963). Their singing is especially notable for stimulating the imagination around basic feelings of love and disappointment, which is what Freud said dreams are all about: wish fulfillment and unresolved conflicts. Someone I know told me he had a dream of encountering a deer in the woods. When we discussed what it meant, he connected it with the desire and anxiety he felt when his girlfriend became sexually seductive with him. Jazz, trance states, and dreams overlap insofar as they consist of auditory and visual images that coalesce into an inner world. When you are dreaming, the imaginary world seems incredibly real. For that time, it is the world you are living in. But when you wake up, you remember it as if it were complete fiction. In waking life, you experience a state similar to a dream in the so-called aesthetic illusion that occurs when you go to the theater and become so immersed in the dramatic action that it seems real.

Jazz is like a dream and an illusion in several ways. First of all, just as you can be the dreamer or, conversely, appear in the dream as one of the characters, in jazz you are the listener yet you become one with the musicians. You are a member of the audience, but at the same time you become so identified with the players that you tap your feet, sing their improvising to yourself, almost as if you are entering their bodies and minds, or at least imagining that you are. This is true of most forms of music, but especially in jazz because the music is spontaneously created right in front of you in the moment, just like the images of a dream.

Jazz and dreams emerge from and stimulate the imagination. Jazz is not about thinking, but about feeling and imagery. For example, in Sketches of Spain (Columbia, 1960), Miles Davis and Gil Evans created a world of images that are more vivid than the passionate Spanish music that inspired them. The listener gets carried away into another world and another time. I can't allow myself to listen to that album when I'm driving, because I will momentarily forget where I am. I will find myself in a dreamlike state, which I can do safely only when I'm on terra firma! For me, Davis was at his greatest in his collaborations with Evans. The latter created an impressionistic backdrop for the trumpeter's imagination to roam freely around his own sensitive areas, and he literally spoke contemplatively yet erotically through his horn.

Contemporary neuroscience supports the idea that jazz improvisers are "dreaming" their music as they perform. When they improvise, the thinking parts of the brain actually show diminished activity. As in dreaming, the parts of the brain involved in emotions, sensations. and memories become more active. This contradicts the common sense notion that the musician is "figuring out" (thinking about) what he wants to play. SaxophonistsSonny Rollins and Ben Schachter told me that their improvisations emerge, not so much from themselves as from another source, which they variously frame as the unconscious, a muse, or God. The musicians and the audience are entering a collective dream space, a "sacred space," where the gods and goddesses appear and intervene in human affairs.

Jazz and the Oneiric