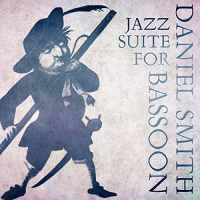 Jazz Suite is the second album by bassoonist Daniel Smith to be reviewed in these precincts (Smokin' Hot Bassoon Blues was the first). This one is far more agreeable, for at least two reasons: first, the territory Smith traverses seems to be relatively more familiar (especially the "Baroque Adaptations") and, second, he manages to play squarely on-key, which wasn't always the case on Smokin' Hot Blues. The Scott Joplin rags (there are three) are always a pleasure to hear, even in this singular context (bassoon, strings and rhythm), while pianist Steve Zegray's seductive three-movement "Jazz Suite" kindles memories of the late Henry Mancini's delightful forays into small-group swing.

According to an accompanying press release, Smith has been described (it doesn't say where, when or by whom) as "the Charlie Parker, Gerry Mulligan and J.J. Johnson of the bassoon." Once the thought of Bird, Jeru and J.J. turning over in their graves has passed, the question arises: what are those arbiters hearing? Although Smith plays well here (much better than on Smokin' Hot Blues), the distance between his bassoon and those other jazz icons can still be measured in light years. True, the bassoon is an ungainly instrument whose adaptation to the jazz idiom is precarious at best, but it can be done—witness Australia's Errol Buddle or, more recently, Michael Rabinowitz on his album with French horn virtuoso John Clark. Smith's solos are respectable, with the jazziest of them arising on the Suite's animated finale, but still a long, long way from Parker, Mulligan or Johnson.

The album opens with the "Baroque Adaptations for Bassoon and Jazz Trio," its five parts written, in order, by Antonio Vivaldi, William Byrd, Henry Purcell, Vivaldi again and J.S. Bach. The classically oriented Smith has no trouble breezing through each of them, while the trio (pianist Bruce Boardman, bassist Terry Davis, drummer Martin Drew) is up to the task as well. The Joplin rags are a pleasing departure, sprightly and remarkably well-suited to bassoon. They include "The Chrysanthemum," "The Easy Winners" and "Original Rags." The "Jazz Suite," on which composer / pianist Gray is a standout, benefits from the addition of two splendid sidemen —vibraphonist Jim Lawless and guitarist Mitch Dalton —who help counterbalance Smith's resonant bassoon. The Suite consumes roughly half the disc's forty-one-minute playing time.

This time around, bassoonist Smith leaves a far more favorable impression, thanks in part to his admirable choice of material, first-class sidemen and, most of all, his precise modulation and notable dexterity, which seemed at times to be missing in action on Smokin' Hot Bassoon Blues. For fans of the bassoon, a vivid and impressive album.